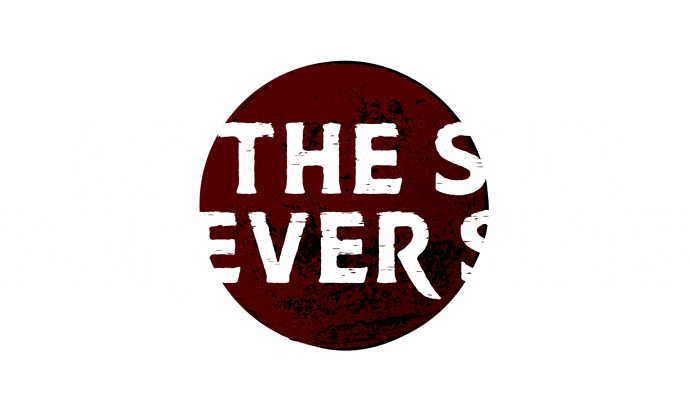 “How incredible that it is the beginning of the new century! Scarcely one year ago I, like many of you, was a citizen of the largest Empire humanity has ever built; a fact that prior to the events of that darkly metamorphic June, had flitted in and out of my mind as thoughtlessly as the state of the weather. Like you, I now stand in the ruin of that collapsed Empire, remembering the days during which I lived in flight and terror; remembering what it was to count life by the second.
For all the unspeakable death and horror the Martians wrought in those 20 short days, perhaps we should be grateful for the harsh lesson in humanity; the seemingly miraculous chance to see the cruel nature of our ways, and the opportunity to mend them. Once those dread invaders fell, it is inconceivable that one could look upon a crowd and not feel gratitude for each individual person in it; to not think ‘How wonderful it is, the breadth of experience in human life!’ Where once we may have looked for weakness and profit, we must now see the inherent value of life itself, in all its forms; we must uplift and protect one another. And in doing so, we shall better the whole of humankind."

A selection from a pamphlet published July 1900, entitled “The New Century - A Year of Relief from Martian Terror.” - Author Unknown

England, 1899. This is a game about interpersonal conflict and survival. A group of ordinary Victorian people try to survive the chaos of the British Empire, as it collapses under the overwhelming weight of an invasion from Mars. The Martians are advanced, eldritch and terrifying. They will win this. The end is all but certain and the day cannot be saved. You’ll live your every day life until everything falls apart, then struggle to survive the unfolding war until you escape, or it ends, leaving nothing behind.

Search for supplies, or a boat out of Britain? Trek across the country to rescue a loved one, or build and furnish a makeshift shelter to keep you safe? Do you sacrifice your energy for your group, or is self preservation all that matters?

We play to find out if the group can work together to survive the conflict, save what’s dear to them, and stay true to themselves.

I’ve been working on this hack since the start of this year, and I figured it was time to put something up here about it. It’s largely complete, and pretty much playable from the rules as written - though I wouldn’t reccomend it yet (wait for the playtest).
Currently the full rules document is about 130 pages, and I’d expect about 150 by the time it’s fully complete (the preview below is just over 100).

I’m trying to merge BITD’s intuitive approach to roleplaying with the tension that comes from survival mechanics in games such as Dead of Winter, Frostpunk and This War of Mine.

This is my first time writing an RPG, and I’d really love to hear your opinions and criticisms.

Rules Document - This is missing a few bits - most prominently the Introduction, the Setting, Safety in Play and the quick reference for what’s different between AtSFS and BITD. Again, some mechanics are partially complete, and the whole thing needs an edit for clarity and brevity.
Player and Group Sheets - These are mostly done (only missing the GM Cheat Sheets), apart from proofing.
Map Sheet - Done, apart from proofing.

Thanks for taking the time to read this! Here’s some sheets in JPG form: 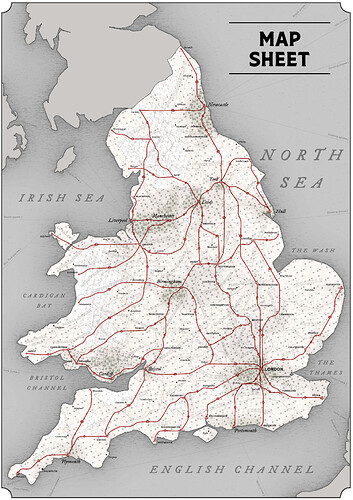 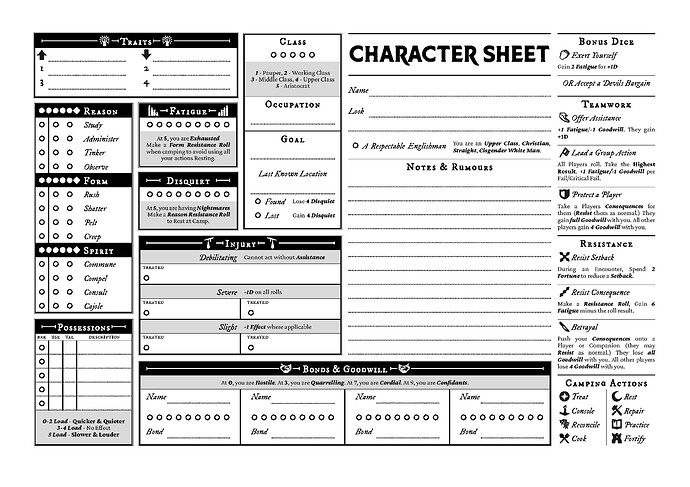 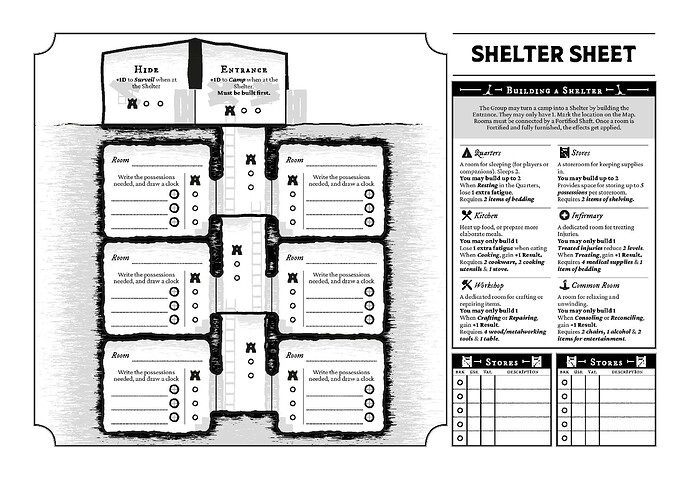 Wow, this looks great! I’m looking forward to giving it a proper read. 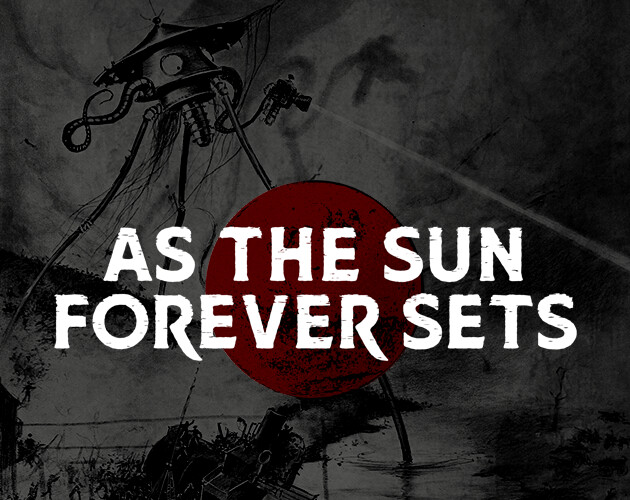 There’s been a few mechanical tweaks to the preview, but nothing major! Mostly spelling and removing half finished sections that’ll be patched in later.

I am so happy you released this. I’m still working my way through it but I know you’ve put a lot of thought into many factors making up this game. I believe at the time I wasn’t sure this would be in my wheelhouse but the more I look it over the more I am reconsidering what I originally said.

Good luck with the release!

Thank you! I’m glad I filed the serial numbers off

Alpha 2.01 is out now. Mostly minor changes, but I’ve added an Example of Play, showing off an Encounter with Setbacks.

Hey! I put up an update on itch showing off some stuff I’ve been posting in the discord since update 2.01 was released, including progress on an updated map and a bunch of other visual tweaks

Along with a bunch of other stuff, I’ve reworked my character creation section for Alpha 2.1 - hopefully giving you everything you need to go from a backstory to a filled in character sheet, leaving you free to delve into the nitty-gritty of the rules at a later date.

Character creation in AtSFS is freeform but (hopefully) designed in a way that makes it simple for the GM and the Players to create them in relatively short order.
There are no character classes - You can be whoever you want to be, your traits and equipment can be whatever your character would feasibly have, and your personal goal can be whatever makes sense for the character - the only caveat is that all the survivors in the group know each other in some capacity before the Martian Invasion begins.

I’ve uploaded a preview here for people who fancy a read! Any feedback would be really appreciated

I’m working on expanding the setting for the next version, and I’ve written the section on the Martians as sort of “Victorian found footage.” Recovered letters, articles published after the Invasion, that kind of thing. Here’s a few previews of where I’m at so far :). 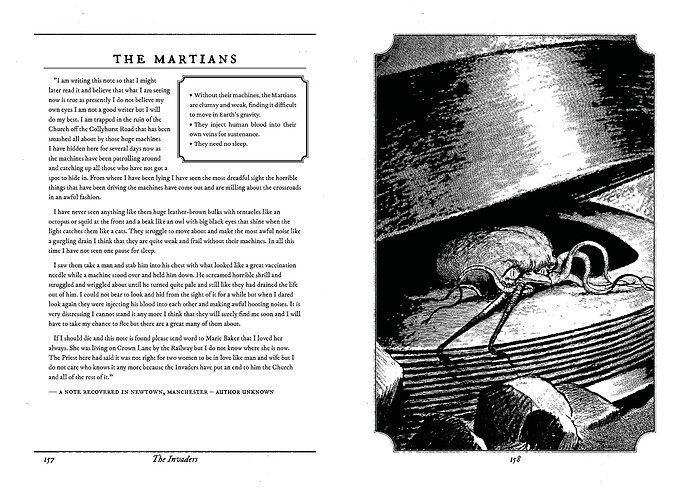 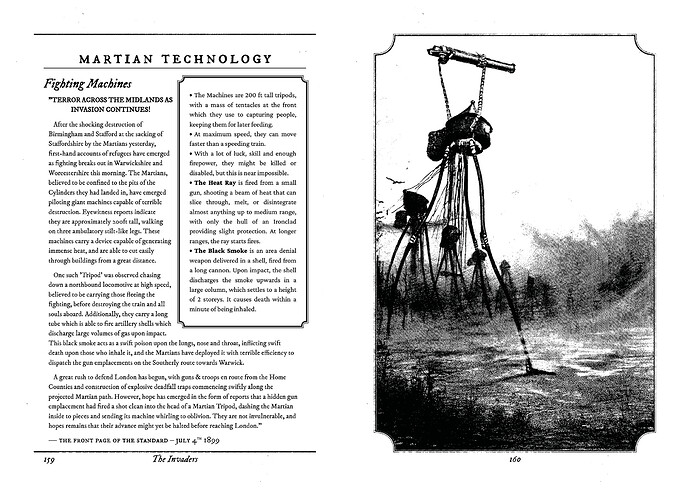 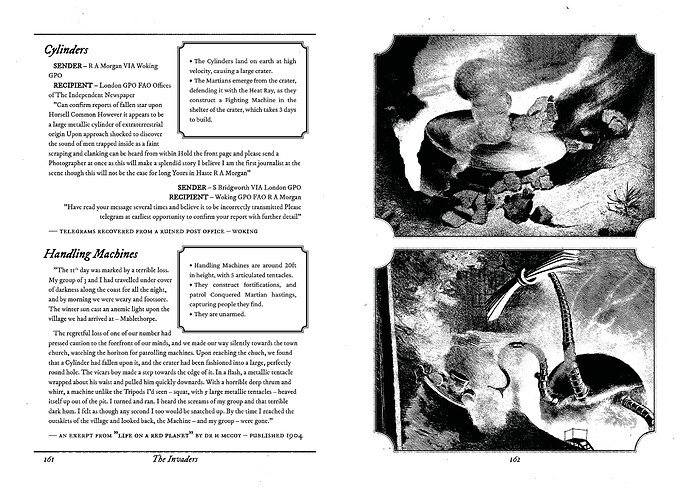 You can check out the full devlog on itch (https://rileydaniels.itch.io/as-the-sun-forever-sets/devlog/335606/alpha-21-out-now) or if you’ve got questions, let me know! Here’s a bunch of spreads 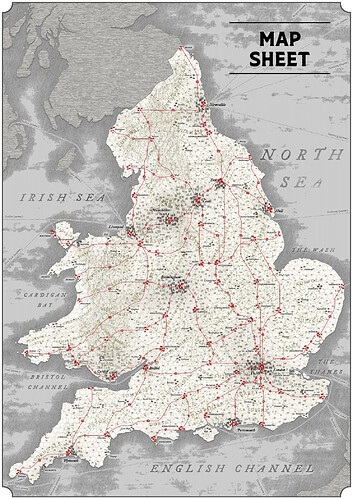 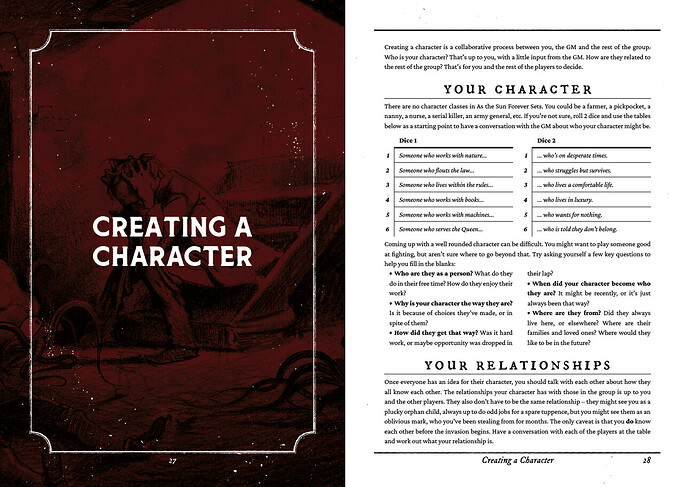 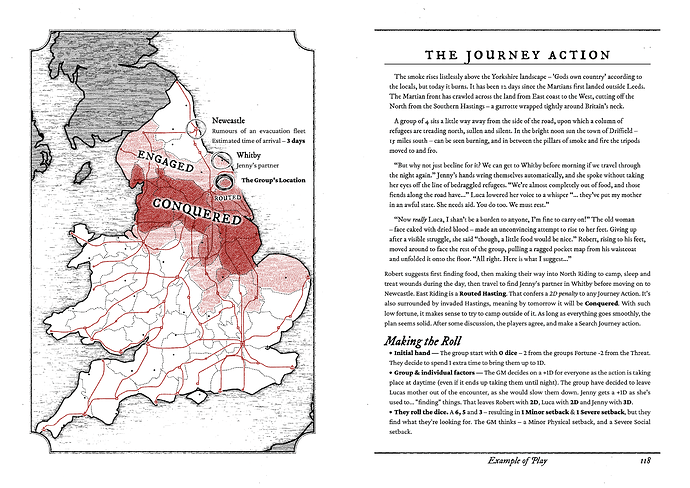 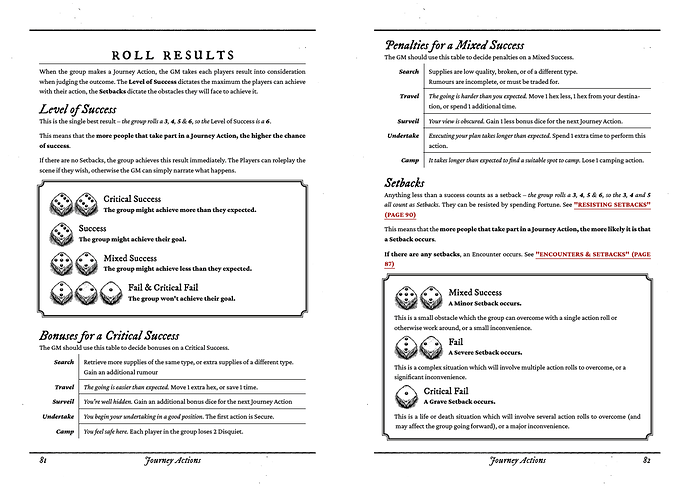 I put up a post on Itch showing some of the stuff I’m working on for the next version, including some of the reference sheets and the Miro board, which has been really awesome to use in playtesting so I’ll be making a template that anyone who owns the game can duplicate and use to play with.

Mostly I’ve been playtesting and tweaking rules to make the game a bit more freeform and narrative focused (making the rules a bit less prescriptive), and I’m really pleased with how it’s going.

Anyway, here’s a fancy promo for the latest version of the character sheet, inspired by the amazing promo images Tim made for Odyssey Aquatica. 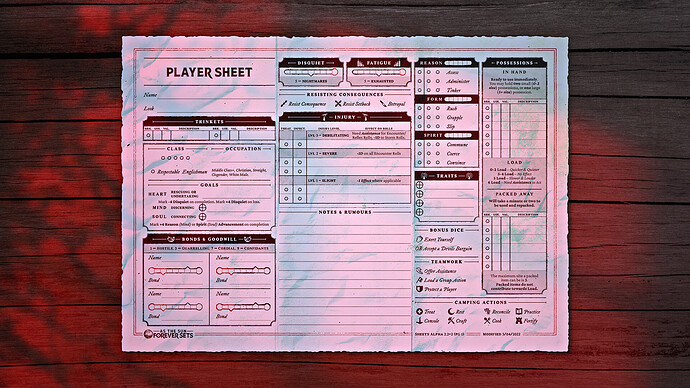 Alpha 2.2 is here! This update makes a lot of gameplay tweaks, particularly to Character Creation and the core gameplay loop, based on the past 4 months of playtesting. This is a big changelog, so be warned! Check out the full thing on Itch - https://rileydaniels.itch.io/as-the-sun-forever-sets/devlog/374637/alpha-22-out-now. 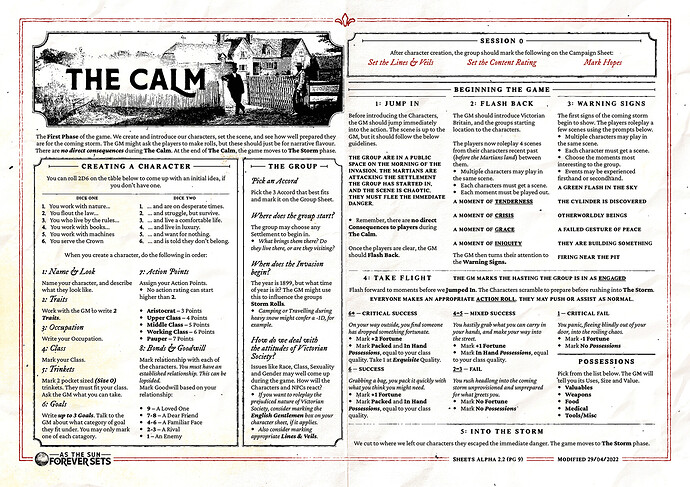 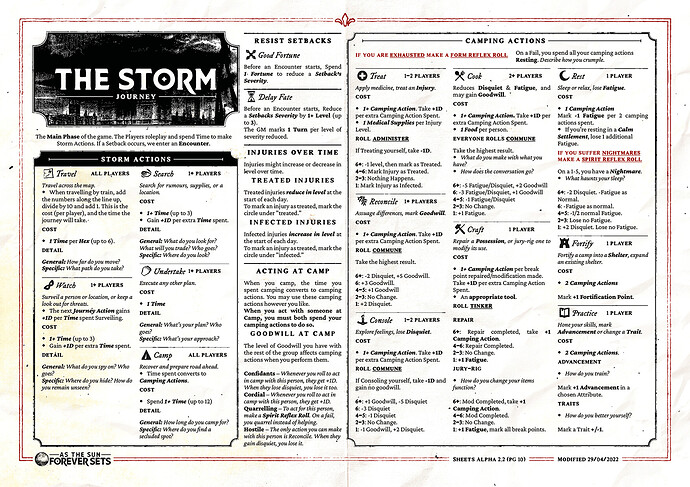 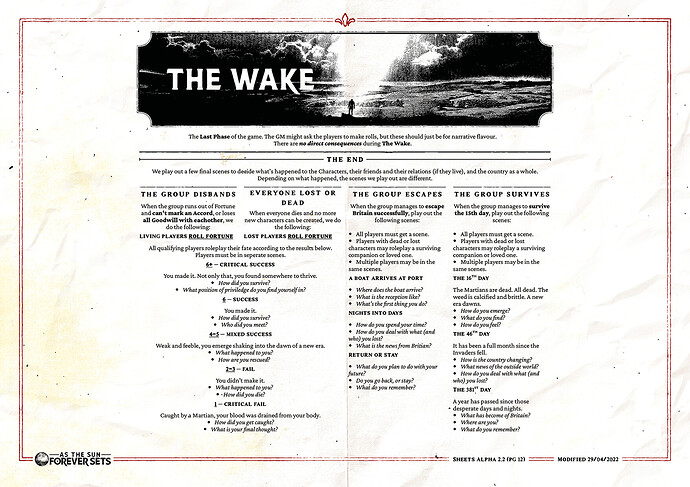 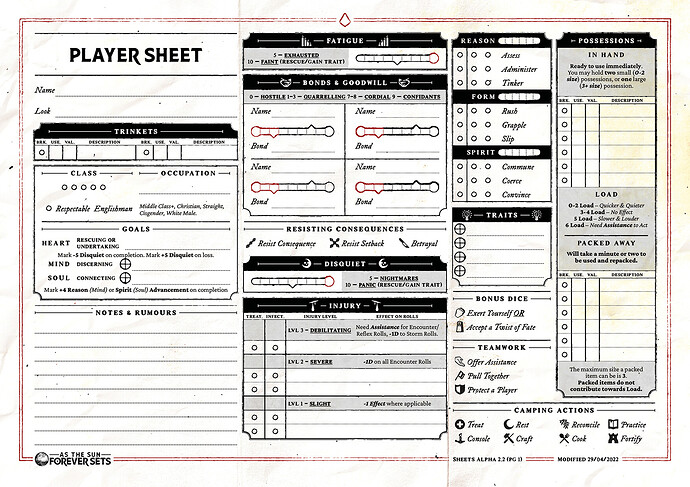 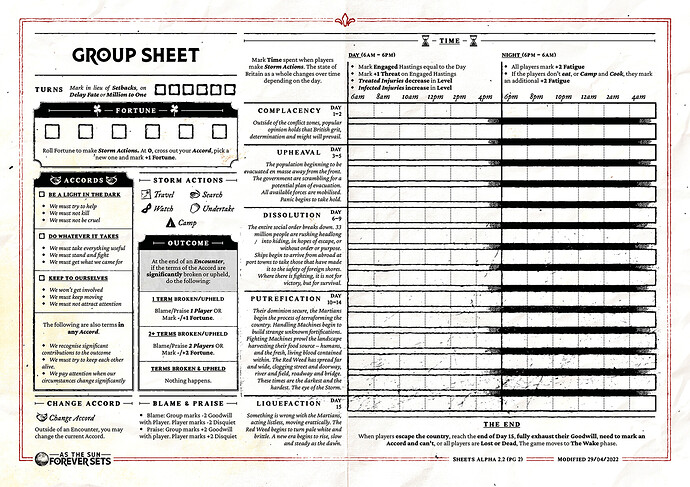 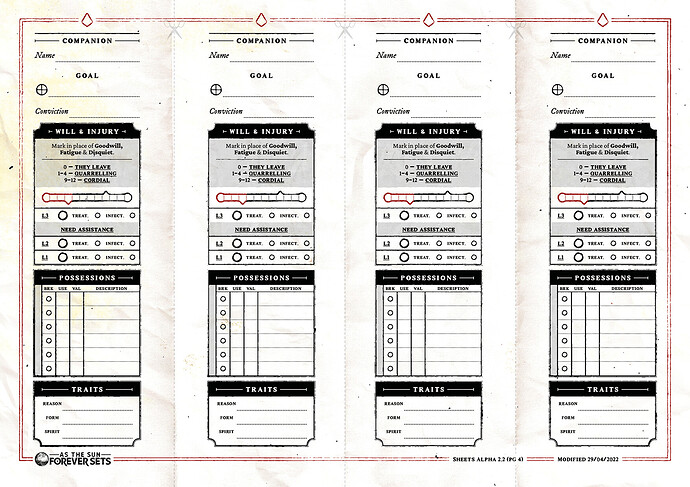