I just released Endeavour, a new PARAGON playset that I thought people here might be interested in. It is an optimistic - science fiction game that takes inspiration from classic science fiction exemplified by classic Star Trek, seaQuest DSV, Quantum Leap, etc.

In this game, the players play as officers aboard the Interstellar Confederation Ship Endeavour. Their mission is investigate strange phenomena, discover alien civilizations, and help those in need.

The biggest departures from the standard PARAGON system is that there are no Gods/Deities in Endeavour. Instead, there are (spacefaring) Civilizations. At the outset of a campaign, only the home Civilizations of the players’ characters will be known, any others will be created/discovered by the players over the course of a campaign. I also modified how Distinction (cf. Glory) works to make it a bit simpler and deemphasize competition between characters.

If you’re so inclined, I’d be delighted if you took a look and let me know what you think. You can find Endeavour at: https://ttkttkt.itch.io/endeavour

Note: I’ve released Endeavour as “In Development” and while it in that state I’ve set the price to “Pay What You Want”. That said, the game is complete (including a fair amount of full-color art) and I don’t expect to make major changes. I haven’t had a chance to test it thoroughly yet, and until I do I don’t feel right requiring people to pay for the game. Naturally, if you get a chance to play it, I’d love to know how it goes and hear any feedback you might be able to provide. In a few months, after I get a chance to run my regular game group through a complete campaign, I’ll change the status to “Released” and set a non-zero price at that time. 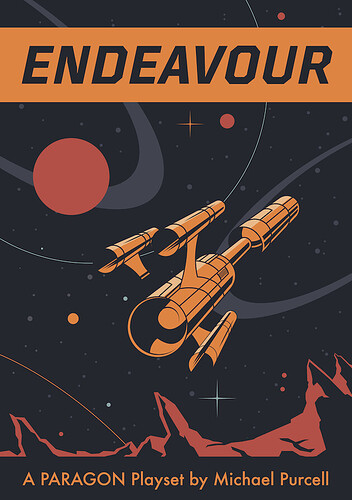 Wow! Super interesting - the theme is one of my favorite. Thank you for making it!

Thanks! The theme is near and dear to my heart as well.

Also, I should thank you for producing three (!) great playsets yourself. I was very impressed with your work as I was reading through the existing literature while preparing to start writing my ideas down on this one.

I hope to find the time to finish my new paragon playset in the next months!

Love it! I’ve always been waiting for the inevitable Star Trek set - it was destined for Paragon, haha. If you’re interested in more feedback and hacking discussion you can come join us in the AGON discord! We’re getting set to run a jam in august

Thanks! As I was reading through AGON for the first time, I was struck by how well it fit the structure of a Star Trek -like show. The episodic nature and structured sessions of AGON mesh nicely with Gene Roddenberry’s vision of what Star Trek should be. That combined with what I see as a lack of Star Trek games that focus on characters and science fiction ideas rather than focusing on the action sequences left me feeling like there might be an opportunity here to make something interesting.

I would also like to thank you for the wonderful playsets that you’ve created. It’s pretty neat to have a chance to chat with the people who have made the games that I used as inspiration for one of my design projects. The caliber of the designers who have reached out to me here is impressive indeed!

I’ve joined the AGON discord and I’d love to be a part of a jam in August. I’m not sure how much time I’ll have to dedicate to such an event, but I’m certainly keen to do what I can.