Is the default assumption that progress clocks are open information? Everyone sees the clock when the GM creates it? Presumably there are exceptions based on the fiction? But, are those exceptions few and far between?

I’ve always had clocks that are open knowledge, but also ones that I’ve kept to myself. However, even for those, I always made sure to show evidence of the clock’s progress in the world around the PCs.

I’ve done private clocks (for overarching stuff; clocks made during missions were always public) with evidence of the clock progress in the world, but I’m considering swapping to public clocks just to give more of an idea of what’s happening to the players. (I have like 10 faction clocks running and updating between sessions for 5 factions/characters, so it’s a fair amount even if they don’t all matter all the time). I feel fine keeping some private, but would still hint at what they are and probably note I have a private clock running for something even if I don’t say what.

I’ve always played with public countdown clocks about anything. The players were always OK with it because it makes clear I’m not there to play to cheat them.

I’ve got a sharp divide between public clocks and private clocks in my games, generally speaking: faction clocks tend to be private and are mostly fuel for my GM prep (though players may of course learn about them in play, but usually only through the evidence of their progress), while any other clock that gets created is public, especially any danger clocks I throw out during a score, or any long-term clock that’ll keep the players on their toes.

For example, right now in my Star Wars X Scum & Villainy game, there’s a gang of assassin droids chasing after the crew, so I’ve got a permanent public clock laid out on the table that I tick with consequences and the players can try working against during downtime. It’s created a nice push-and-pull dynamic to have that be visible to everyone.

I always do public clocks for anything the PCs directly interacted with or caused, namely from their rolls, Devil’s Bargins or Entanglements.

I keep clocks hidden if the PCs had no direct interaction, like NPC Downtime.

Public, but always framed within the fiction. So if the Red Sashes are planning to strike a crew hideout in Six Towers, the scoundrels hear rumors about gang activity in the area, and the players see a clock titled “Sashes Scout-Out Six Towers.” The result of that clock finishing–a Red Sash attack on the crew’s holdings–isn’t explicit (the scoundrels may not know exactly what the Sashes are up to, though they can probably guess), but it’s something the crew could easily find out if they choose to.

I keep most clocks public but make exceptions. Faction clocks are generally private unless players have a good reason to be aware of the faction’s activities. I also like keeping some clocks on missions private to increase dramatic tension. I had a game recently where the players were holding off a deadland beast while trying to open the door to a vault. Keeping the vault clock hidden made the whole scene very stressful and dramatic. How close are they to drilling through the vault door before the monster reaches them?

I think it depends on a few things, not the least of which being simply ‘what does the group prefer’, of course. Mainly, i think there are clocks that players are meant to interact with ( anything that they could directly make a roll to affect ) , and there are clocks that are more about tracking things ( countdowns, faction clocks and the like ). For the former, i think it’s vital the players see them. For the latter, it is not, and that’s where the preference comes in. I’ve had groups who want to know everything, and groups who want to know nothing, and anywhere in betwee, really.

I have a wall or section where I keep clocks both visible and unseen. Visible clocks are mentioned at the beginning of each session if there has been any progress on them. (This includes NPCs, Factions, Consequences, etc.) All visible clocks are labeled and GM notes attached. Some are for the crew while others are personal and attached to their character portraits.

Unseen clocks are rare for me, however, I do still use them. The players are aware of a clock but do not know the details such as size or how full it is, they may occasionally know the context for the clock but that depends on the fiction and current situation. Some of my unseen clocks are GM use/prep only while others directly correlate to the crew and their actions.

Just my personal opinion on the matter but truly it is up to the table at the beginning of the campaign if that is something they are comfortable with. Some tables may have only public clocks while others will use the shadows.

A lot of great answers here.

To me it depends on the purpose of the clock – are players supposed to react to it? Should they base their decisions off of it? Should it affect their understanding of the fiction? Then obviously it needs to be visible.

If the clock isn’t meant to drive player behavior or emotion, then you could make it hidden. This seems much less useful in my opinion, but as mentioned above it could be used for driving behind-the-scenes plot/faction stuff that the characters and players don’t need to know about.

I tend to use public clocks, but private descriptions. I don’t tend to display the clocks prominently, but I also don’t use a screen; they’re just sort of out on the table on some index cards. The details are on the back for me to reference, with NPC info, too.

I figure if the players glance at something and get spooked because “The Lampblacks are up to something,” then I think the clocks have done their job. The players should be ever aware that the world is moving, too. 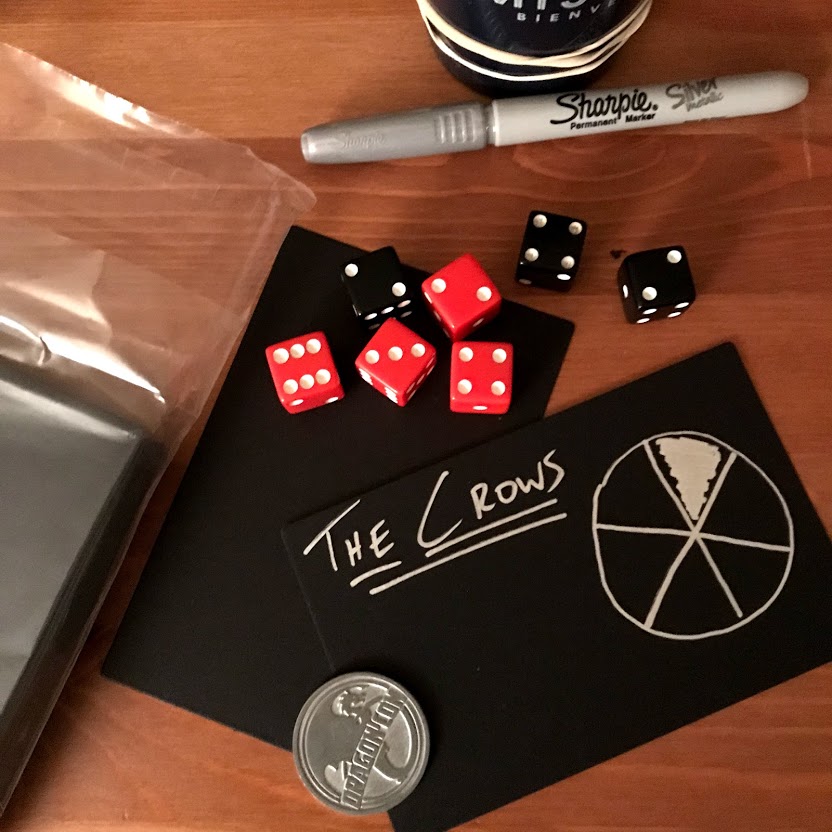 I wouldn’t worry overly about defaults. I think some secret clocks would be fun and might try that for my next games.

As a data point, I’ve kept all clocks public and very visible. After a few sessions I tend to have 15-20 clocks atop a map of Doskvol as the table centerpiece. As all the players sit down for a session they might see 3 or more new clocks that I thought of in the time between then and the previous session. The barest whiff of secrecy comes only from some clocks’ cryptic title/name. If it doesn’t draw their attention and solicit questions (and there’s only so much time within a session), well, that’s some feedback for me as a GM. If it remains of interest to me, I might place it more centrally, change the name and/or have an NPC draw attention to it in next session as it advances.

After the first session I do a fair amount of prep and thinking about the game a GM, (almost none of it strictly necessary), but sit down each session committed to having no idea what the crew might get up to as a Score that night and following the other players’ lead/interest. I have hooks and character/setting color as my prep but otherwise don’t direct the action apart from the public clocks.

Entirely open clocks has worked fairly well for me as cues for play with this approach.