I released a playset for a genre I think is perfect for Paragon: Mechs vs. Monsters. The best player in a contest can have a lot of fun with throwing buildings, slamming monsters into mountains, punching a monster then getting out of the cockpit and running down their Mech’s arm to punch them again… 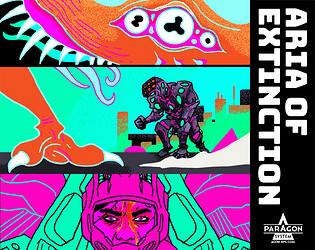 I’m pretty proud of how it turned out! The game can obviously support Mech vs. Mech stuff and more political intrigue / conspiracy type play; I’ve included some basic factions and Mech details to draw on, but there is possibility for more.

The core campaign loop is about preventing devastation (which can occur mid mission with a unique harm tag) and automatically between missions. Successful missions have the players bolstering and bettering the lives and chances of survival for humanity. As devastation increases the Extinction player gets lots of tools to make the lives of the players harder.

100% of proceeds go to climate change charities! Each dollar spent also unlocks a community copy; as of this posting there are 67 community copies available.
If you get a chance to play I’d love to hear your play experience and feedback!

On art social media the month of June has a #kaijune challenge, where you draw a giant monster a day. I plan to generate a monster using the rules of the game for each day of the drawing challenge. At the end of the month I’ll gather them and include them as an additional resource file for the game.
If you’re interested in following along you can find me on social media under @sporgory

Really diggin the art for this!