I’m about to start up a new BitD game. My main experience is with running PbtA games, and I have run a few sessions of BitD before.

The main issue that I have with starting up a new game is needing to do a lot of exposition at the start in order to explain what the backgrounds are: Akoros, Skovlan etc. I’m also not super into the different cultures being described by what skin colour they tend to have, and I feel that this exposition means we miss out on some of that awesome PtbA structured world building stuff that we get to do when we create Apocalypse World characters or Dungeon World Characters for example.

The other issue that I have is trying to make the game a bit more explicitly queer, in a world where we are breaking all of the imperial laws lets have some fun with gender as well! So I was pretty inspired by Avery Adler’sDream Askew game, and also found some of Andrew Gillis’ Girl by Moonlight worldbuilding stuff really interesting as well and had a go at making a few sheets for a BitD game to work alongside the playbook sheets.

Does anyone else have their own ideas how to make that exposition part a bit more engaging and collaborative? 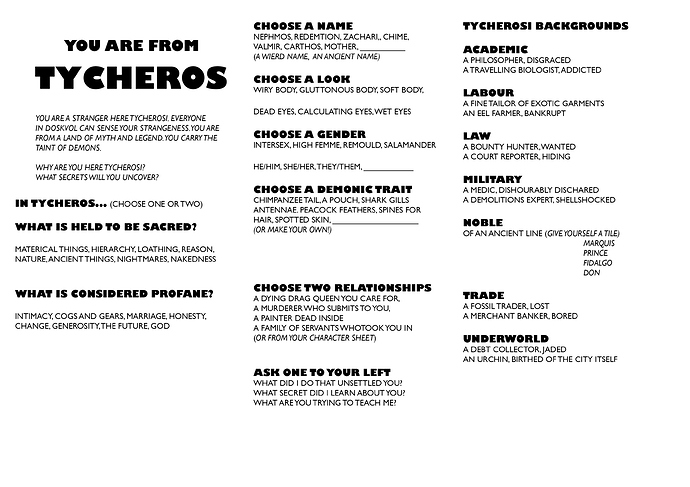 I’m very new to running Blades too. Minimal exposition, straight into characters, gather information and score. Think of it like you’d watch a movie and let the players learn the world as they go. “You’re daring scoundrels, Doskvol is dark and haunted. Go.” Beyond that for world creation, the learning about your incidence of Doskvol is to be developed through asking questions just like PbtA games.
As for queer and gender, just bring these things into your game in the same way, imo.

I love that set of questions! That’s a great adaptation of Dream Askew’s approach to worldbuilding, and I can see it elevating the backgrounds into something more than a set of transplanted ethnicities. Have you made similar sheets for the other heritages? I’d love to use them in my own game.

I’ve also been wondering how to handle LGBTQ inclusion for my own game (our whole group is somewhere in that alphabet) so it’s reassuring to see someone else in the same headspace. Have you listened to the Magpies podcast? They do an elegant job of this, I think.

(currently lost in the weird west of A Fistful of Darkness)

Maybe unrelated to your actual question, but on the Discord people has been suggesting Tycherosi are the other fantasy races, or half-human-something races, ie orcs, elves, tieflings. The lore does have it’s roots in a Dungeon World campaign after all.

Tubal and cyberpreppy I have them for each of the heritages except iruvia https://drive.google.com/drive/folders/1VpChVd0s9wIZNmYRf163ZqB8u0CjQOWG?usp=sharing
if you wanted to have a look

Also thank you for suggesting the magpies podcast, I’m loving it so far!

I listened to a podcast about the Polari language not long ago and it just made me reflect a bit on the intersections between the groups that are on the underground of ‘polite society’ and am keen to play around a bit in that space.

In our game we looked over the manual and maps quite a bit during session zero, and saw that a lot of places were physically close or easy to access via train. So described our character ethnicity, genealogy, and geopolitical identity. Here is what some of the crew was like

Our Lurk was a third generation Akorosi-Tycherosi immigrant. Since he had no natural demonic tell, he modified his body with tattoos and prosthetics. He came to Doskvol to earn a living, but mostly isolates himself in the Tycheros districts and prefers to not speak the Imperial language unless he has to. He will return back to his home once he has made enough money.

Our Cutter was a Dagger Islander nobleman with political (and a few distant blood relations) ties to Iruvia. He could see the complete corruption in the nobility and denounced them. He came to Doskvol to start an acting career, often using a stage name that sounds more Akorosi, suppressing his accent and wearing only local fashion.

Our Hound was conceived on a one nightstand between a Tycherosi socialite and a vampire (revealed later on as Lord Scurlock). She doesn’t think much about her heritage, never really knowing much about Tycherosi culture; but does appreciate that it naturally gives her a connection to arcane forces. Doskvol has always been her home, and she’ll deliver justice to both lowly gangs and the government.

Our Spider was an Imperial officer during the war with Skovlan. He wound up claiming a villa and taking in a full house of Skovish servants. Despite living there for almost 8 years, his understanding of the culture and language is crude. The only thing keeping him from being a full on bigot are the illegitimate half Skovish children he’s fathered. He came to Doskvol out of an old obligation, but sends most of his earnings back to his estate.