Here’s two log sheets I made for running Band of Blades. Here’s a A4 pdf version and xlsx version if you want to fiddle with it.

It’s not particularly pretty but it helps me track all the moving parts of Band: one page per mission phase, one page per campaign phase. 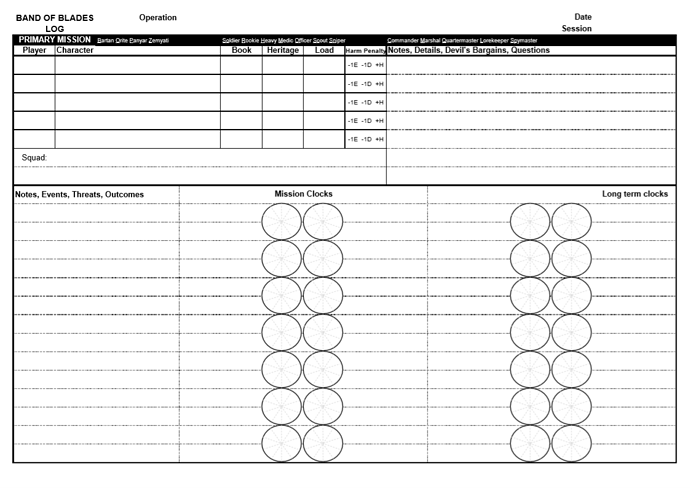 I often forget about harm penalties, so I can flag them by circling -1Effect, -1D or +Help.

There’s also plenty of space for clocks, short term and long term. I went with guidelines for a ten-clock, since I always find they’re the hardest to draw and they still help drawing any other size clock. 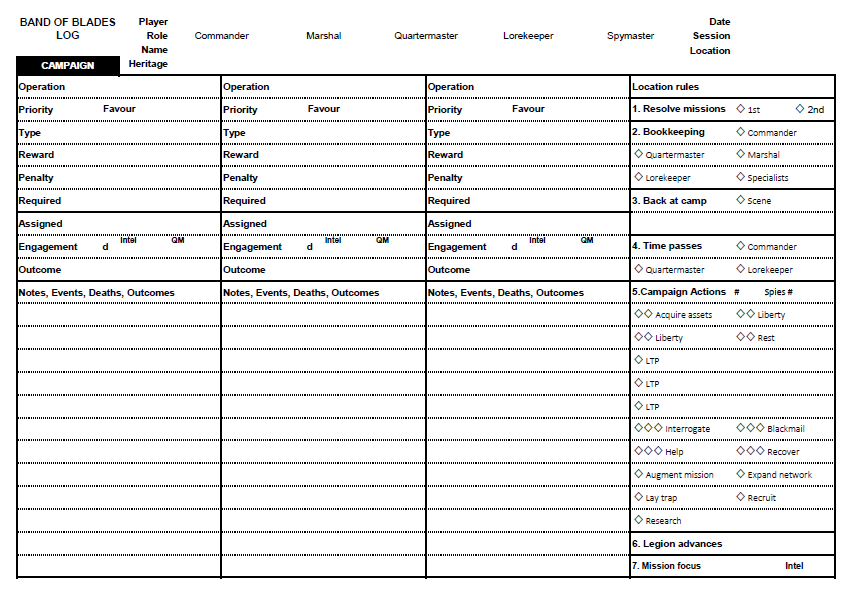 Band of Blades log - Campaign phase852×602 33.4 KB
I use this to write out all the details of missions available as I roll them as well as who the Commander assigns, the outcomes of the engagement roll, and the resources spent. There’s space to record the fictional consequences of secondary missions and failed missions, as well as the current location and it’s special rules.

I can also track the names and heritages of the command staff and who plays them, which I always seem to forget.

The checklist for the whole play cycle helps me orchestrate the whole affair, so I don’t miss steps or forget where we’re up to. I rely on the players to use their sheets to know the details of what they can do.

I usually start a double-sided sheet filling out the random missions details. Write up blurbs for them and send to the Commander between sessions. Then I flip over the sheet to record the primary mission, then flip back when we roll the secondary and for the rest of the campaign phase. When the Commander tells me their focus for the next set of missions, I start a new sheet.

I’ve been using it for awhile and thought others might also find it useful. I’ve made similar sheet for other RPGs with plenty of moving parts, like Torchbearer, and I find them critical to keeping on top of things.

Let me know what you think.

Quick note about the Engagement box: an Officer (etc) with one of the Special Abilities can also add a die to Engagement rolls (and I forget if there are other things that add to it beyond Intel and the QM – that one just comes up a lot in our campaign).

Quick note about the Engagement box: an Officer (etc) with one of the Special Abilities can also add a die to Engagement rolls

Cheers. Yeah I don’t usually note engagement roll bonuses, just the total dice rolled and how much intel and Quartermaster resources are spent.