This began as a character portrait for one of my players. He wanted to look like The Craftsman from Little Nightmares. I made a steampunk version for his leech, but it turned out disturbing enough that I think this guy should really be a villain in someone else’s campaign. Maybe yours? 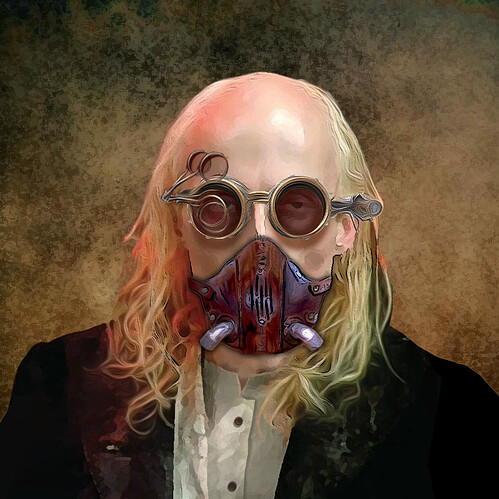 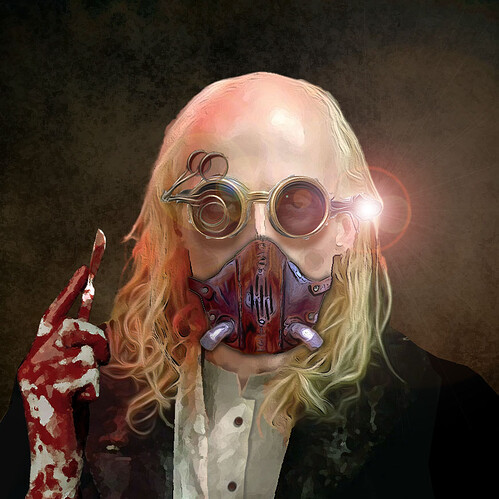 Andrew Ease was a sickly child. Perhaps that’s what set him on the path to become a doctor. Now grown, he never recovered from the damage Doskvol’s smog inflicted on his lungs, and he requires a breathing mask at all times. The creaking sound this makes when he breathes gave him his nickname, which he bears with an ambiguously raised eyebrow.

With no family, he has time to be a physicker to the upper class by day and to perform charity healing at night. But in truth, his pro bono work is a cover for his obsession. An adolescent sweetheart was killed in an accident and their spirit was captured in a jar by a lucky spirit trafficker. Wheeze managed to track down the jar in the macabre collection of an upper-class family, and in his rage he slaughtered the entire household.

Escaping with his treasure ahead of the Spirit Wardens, he vowed to locate the perfect vessel to hollow so he could restore his lost love. Frustrated in his now years-long search, he is not above “altering” the occasional patient in an attempt to “improve” them as a potential host. So far, the only result has been a series of failures and mutilated corpses in Duskwall’s canals.

Thanks, I hate it

If I ever use him in a campaign, he’s going to have to sound like a cross between Darth Vader and Riff-Raff from the Rocky Horror Picture Show.