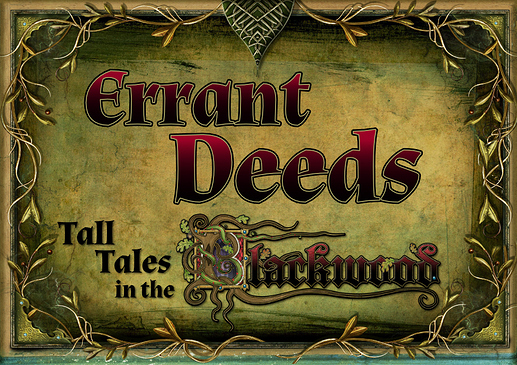 jjNuQa1000×707 526 KB
Once, there were bold Errants who took up revolutionary arms in the beguiling wilds of a folklore forest. They braved duels, courted romance, and pursued their quarry in fields and noble courts alike. They sought power through high magic and fair bargain, suffered betrayals, took bloody revenge, reveled in victory, defied death, and told tales of high-flying adventure.

Errant Deeds: Tall Tales in the Blackwood is a Forged in the Dark roleplaying game of tall tales told by these Errants. We play to find out if our fellowship thrived amidst the tangled threats of meddling elves, a realm in peril, and the tension between each Errant’s calling and follies.

Our adventure already happened. We gather many years later in a roadside inn to recount (and embellish) the deeds that brought us together. One of us plays the Innkeeper, who knows more about our tales than they let on. The rest of us assume the role of one of four errant archetypes:

Hunters are crafty trackers and sharpshooters.

Jacks are agile and lucky tricksters.

Sages are wise and learned scholars.

The Blackwood tangled around our every step. Which of us lived, and which of us became voices from beyond the grave? Only the tale will tell.

Errant Deeds is currently a playtest kit available on both DriveThruRPG and Itch.io:

Paying for the product now will give you access to every update all the way through to the final release of the finished game. But if you’re unable to pay right now, you’ve got two options:

There are a few episodes of playtest AP on the Play/Test Podcast to give you an idea of how gameplay works:

I’ll be posting updates in this thread and would love to hear your thoughts! I’ll also be looking to playtest starting early 2020, and I’m sure I’ll do some recruiting here. Let me know if there’s anything else I can do to get you fine folks excited about this project.

Seems cool! I might be missing it, but I can’t seem to find the playbooks in my download?

Thanks for checking it out Ryan! There are no proper, character sheet-style playbooks in the document just yet but there’s a link in the text to a digital playbook available as a Google Sheet. You can click here to get the template too.

I just read through Errant Deeds. First, I love the flavor of the text and the way it was carried through the entire document, including “downtime.” Your change to approaches (deeds) is awesome for driving the story. It gives the players a lot of agency for crafting the type of story that they want to tell. I would be interested to hear how you would see that working in other genres.

Most of the rules and character pieces are clear - especially if you already understand Blades in the Dark. However, it wasn’t obvious to me what an illuminated manuscript could do - is it a the creation of a spell effect within the story? Eventually, a few examples of the crafting rules (including illuminated manuscripts and fighting schools) would be great. Also, it looks like “Rank” was omitted – I assume that covers things like tier, quality, scale and potency?

As you continue to revise and expand, it seems like it could use a strong section on the roll of the GM / Innkeeper. It seems like it is a mostly reactive roll. However, I also think that it wouldn’t be too hard to turn this into a gmless version of Blades. It is about “heroes” telling stories in a tavern after all…it would be really easy to allow other players to call “bullpucky” on something that a hero does so that other players could tell the “truth” about what really happened.

Although I can easily see how this could be run as a campaign, I do think it will work amazingly well as a one-shot. I am looking forward to seeing the next iteration with your approach to crews and factions.

Now I just have to find a way to play this…

Thanks so much for giving it a read, ebrunsell! I would have responded sooner but I had my hands full this past week with a cross-country move.

As far as Deeds go, currently it’s just a straight reskin of Scores. With that in mind, I think it would transfer pretty well into other genres! If I may ask: what is it in the Deeds rules that you found unique? I’d definitely love to share my ideas here but since my innovation was, uh, by accident… I’d love to get more context from you first!

Illuminated Manuscripts are indeed spell effects. They’re literally spellbooks, with the idea being that each spell requires a full book’s worth of illuminated script. But you’re right: examples of the crafting rules are absolutely needed, and will be included in future revisions.

Rank isn’t in the game at the moment because I consider that to fall under the umbrella of “Faction/Campaign-level play” and those rules aren’t fully fleshed out yet. But yes, “Rank” is an umbrella term for tier, quality, scale, and potency. I’ve found all that terminology to be confusing for new folks over on the BITD Discord server so I’m streamlining it quite a bit in Errant Deeds.

I’ve run two playtests so far, and in the latest one someone told me “the Innkeeper is great but I’m wondering if it’s possible for anyone but you, Eli, to run it.” Dubious praise! I’m confident it’s an easy-to-learn role but it will absolutely require some explainer text. And you’re right: there’s a lot of potential for a GMless game here. Right now I’m planning to stay pretty close to BITD as far as the GM role is concerned but GMless play is something I’d really love to playtest.

Again, thanks for all the kind words and thoughtful critique! I’ll be organizing more playtests in early 2020 so I’ll hit you up when I start to look at the schedule for those. It’d be great to get some hands-on feedback from you.

I thought the “simple” change to approaches was brilliant. Instead of the BitD standard of Assault, Stealth, etc. you used “adventure” types – Go A-Rangin’: delve into the Blackwood, Ruse: Play a trick on someone, etc. Instead of describing how the characters start an adventure, the categories allow players to select the category of adventure that the story is about.

It seems like a really strong prompt to get players thinking about a story to tell.

Ah, gotcha! My plan there was to create options that all create kinds of stories. Stuff like the Arne-Thompson-Uther folklore index was inspirational here, but a) that list is way longer than I wanted in my own game, and b) The Blackwood is only adjacent to European folklore. It strikes out in new directions (particularly in the direction of American tall tales) so I had to come up with mostly new story types.

Anyway, I’m glad you like it! I’ll be thinking about ways to highlight the differences between Deeds and Scores even more.

I was charmed by the premise of playing stories that have already occurred as well as the Innkeeper role, and I’m hoping this leads to charming innovations along the lines of flashbacks/flashforwards, breaking the 4th wall, etc. Reminds me conceptually of the Extraordinary Adventures of Baron Munchausen.

Thanks much Khierdan! At the moment there are no specific flashback rules because the whole game is a flashback but it’s something I’m keeping an eye out for while playtesting! And breaking the 4th wall is absolutely something I’d like to include too.