Since the strange physical features of the Tycherosi are left up to the players, I’m curious as to what your favorite examples are that you’ve played with or thought of…

Some of mine are:

Constantly growing rat teeth that must be ground down

In our first game, our Tycherosi only showed their demon features under extreme duress - but of course, everyone knew they were fae demon creatures and distrusted them for it. My character’s skin drained of colour, her eyes became large and black, and her nails hard as iron and horns burst from her skull whenever she used Not to be Trifled With.

Hey there! My GM directed me here. I have a Tycherosi character whose demonic tell is a crown of bone that grows from his skull and breaks through his skin.

My Tycherosi has dragon scales instead of hair. And she can breath fire (Leech with Venomous: Fire Oil). She’s called Draco

We haven’t had a lot, but i like to be specific and outrageous. A woman with fire burning under her skin, who smells of gunpowder and soot, scaled like a snake. A man tall, lithe, and blue, with whiskers and hair that seemed to move as if underwater. A man with skin like charred bark, horns made of branches, a face like a mask of wood, enormous in stature.

As a DM i created a NPC Tycherosi Bar Keeper that was Fly Inspired for the drinking den the crew frequented.
They had dark facetted eyes and tiny hands, would twitch nervously, while obsessively cleaning the bar or polishing glasses.

A mantle of long Raven tailfeathers instead of hair!

Minerva, Samaat playbook
Blood priestess of the Burned King and her body/skin is her Tychorosi heritage. She changes color and on occasion texture like a cuttlefish based on situation and emotions. Her skin is also in which the way she communicates and communes with her deity and it can become a beacon of light within the ghost field (which has been used as an a devils bargain when trying to not draw attention). 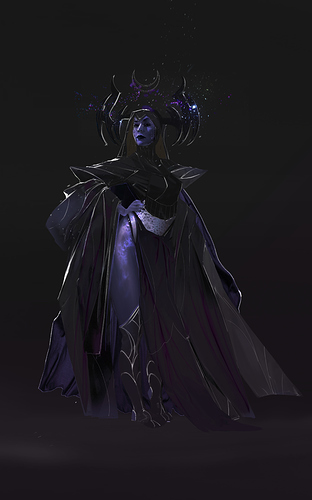 Joan, Squint playbook
Leech type character who is really into bees and wasps nature lover. She when gaining more stress or resisting to prevent a trauma her bee like nature begins to show. When she gains a trauma she goes full on wasp in nature and habits (creating wax like sculptures, humming, etc).

A shark rictus for an eye, hidden under an eyepatch.

The top half of the strangers head (top jaw up) is a candle/Pearl/gem that radiates a pleasing, soothing, violet light.

Transparent skin (to what extent it’s present is up to you).

A mouth that extends ear to ear.

Two faces on one head

Several rows of differing animal teeth behind the human ones.

The tycherosi arm is made of glass and is to all appearances hollowing. A different substance/organism replaces the hollow space each time they sleep.

A transparent film is over the skin/tissues covering the Stranger’s heart. In place of their heart is a scale model of a leviathan hunter ship, always tossing about in a squall.

The strangers facial features have limbs/umbilicals and constantly crawl about their head.

The Stranger talks w/ a chorus of voices, some old, some young, some pained some ecstatic.

A crown of avian beaks, each beak from a different bird. What do they say?

The Strangers skin changes to a new, outlandish colour during the course of every day.

The strangers hair is luminous, like the broken sun.

The stranger has a third, smaller arm in place of their tongue.

Skin that flakes as drops of bioluminescence. Skin flakes that turn into shreds of paper w/ one ominous word on them before rapidly decomposing.

Arms that have an extra elbow like Steve Erickson’s Forkul Assail.

I’ve found that China Miéville’s Remade make for some really good inspiration for tycherosi features, but that also maybe me projecting a bit of Bas-lag’s weirdness onto the Dusk

Left hand was a hissing snake.

Ribcage on the outside of their torso.

We have a Tycherosi Lurk in the group with an opossum tail.

My primary Tycherosi NPC is abnormally tall (a little over 7 ft) and big-boned, just a huge presence to him. For story reasons, the only other trait evident displays in glossy black feathers that peek through his hair. As we’re approaching the endgame, I have it planned that he’ll be meeting a demonic relative who brings out more traits, including large black talons, enormous wings to be able to accommodate his size, and fully black eyes. I didn’t go too wild this time unfortunately, but my next game I’m definitely planning to do more interesting things wrt Tycherosi traits, so I’m loving this thread in a major way.

None of my players are Tycherosi, but I worked it out with a player of an Iruvian Whisper that demon-blooded Iruvians could be a thing, so she and I riffed on it. She decided that her “tells” were constantly-shifting iris color and hair that always kept the exact same length.

I’ve had a couple Tycherosi NPCs, however.

I play a middle aged Tycherosi man and I had so much fun messing around with his look!

Ash grey skin, naturally black nails that absorb light, making them void like, and eyes that do the same. The whites of his eyes are blackest black, and don’t reflect light, and his iris’s are practically neon red with white pupils.

His hair used to have the same pigment that absorbed light but has sense gone grey in his old age, and looks a bit matte. He’s broad as hell (heavier set, as well), and about 6’06”, and a hook hand but that’s just from being a retired leviathan hunter. He’s just a spooky, large old man.

I created a Tycherosi telltale generator, and I add to it when I think of a new one. It’s helpful when I need to make up an NPC on the fly.