Speculate, the actual play show I co-host with writers Brandon O’Brien and Gregory A. Wilson, just launched a Girl by Moonlight series, using the “In a Maze of Dreams” playset. 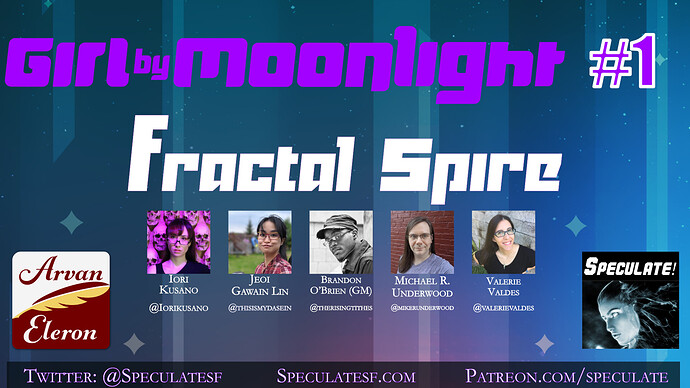 Here’s the pitch for Fractal Spire:
In a dystopian world dominated by looming spires and media saturation, a sentient dream of a forgotten past launches a Conspiracy to shatter the barrier between the waking world and the dream. After their leader’s mysterious disappearance, four dream travelers investigate the Conspiracy and fight to preserve the dreaming realm as an escape and inspiration.

Starring Iori Kusano, Jeoi Gawain Lin, Michael R. Underwood, Valerie Valdes, and with Brandon O’Brien GMing. We’re very grateful to Andrew Gillis for sharing their in-progress game materials so we can play and to Evil Hat for sponsoring the show to help us with production costs.

You can watch series creation in our session zero here or jump in with episode one here.