How do you engage with problematic material?

First post: Hi Everyone! Apologies if this should go in a different catagory!

I’m working on a FITD hack geared around a group trying to survive an alien invasion, with mechanics like Food, Trust, a map with a grid etc, which I will make a topic for once the Rules Reference is a bit more final.

I’ve themed this around The War of the Worlds as I was a fan growing up and the setting is perfect, but I’m having second thoughts. HG Wells was a notorious anti semite and racist, and whilst The War of the Worlds doesn’t contain those themes, much of his other work is completely rotten with it.

I’m torn between “scraping the paint” off the setting entirely and coming up with something original, or adding a foreword completely disavowing his horrific opinions. Part of me loves the idea of HG Wells spinning in his grave at the idea of a diverse cast of victorians teaming up to survive the Martian invasion, but I’m worried the name alone might put people off?

I’m familiar with the discourse around Lovecraft, but does anyone have any advice about how they engage with problematic material like this?

@lovelyeggy I’m not sure if you have seen this article (or if it is helpful to you):
https://www.vice.com/en/article/y3mw5b/how-tabletop-rpgs-are-being-reclaimed-from-bigots-and-jerks

First off - welcome to the BitD Community. This is a fantastic first post from you

John Harper’s Agon rulebook he has a great essay discussing how to allow players and GM (or as it’s called in the game, the Strife Player) to incorporate more diverse and equitable viewpoints and identities into a mythologized Ancient Greece. He also did a fantastic job in encouraging people not to fall into use of stereotypes and suggestions on how people could express their knowledge of the setting (or lack their of) to create the most inclusivity. It might be a helpful read

Is there any reason you couldn’t do both your approaches? You could file the serial numbers off of WotW and create your own setting with the feel of the original property. Then you could provide a couple of short setting supplements as backer goals (if you go the Kickstarter route) and then include a straight Victorian era pastiche with the foreword you mentioned and suggestions on how to address issues of the setting in their game. Feel free to ridicule me for proposing you do even more - I deserve it.

Finally, best of luck on this project.

I have but thank you!

Thank you for this! I have a copy of Agon but I’ve not had chance to read through it yet so I’ll definitely check that. I’ve written something similar, essentially: make whoever you want with the constraint that they be an ordinary person (ie: not a superhero etc), and complaining about “historical accuracy” or whatever is redundant because Martians are also not historically accurate.

I’ve thought about doing both, but I’d probably do it the other way around (a modern day setting supplement, 1950’s setting supplement etc) if I was going to. A lot of the new mechanics I have written currently play into the victorian setting, and the themes are interesting to explore - for example there’s no classes/archetypes like BITD/S&V etc, character creation is relatively freeform, characters given a social class based on their occupation and background, which effects their starting action ratings, trust with other players, items, how NPCs react to them etc. I feel like the setting makes this RP easier. Ultimately the idea is to have these differences melt away over the course of play and become meaningless as the players advance through the game. There’s also an opportunity to engage with the imperialism theme, wether that’s mechanically somehow or narratively just by watching the British empire fall to pieces.

Obviously these exist and could be explored in a modern day setting, but there’s something about overconfident british imperialists vs impossibly powerful aliens that’s compelling.

It’s literally just the racism/antisemitism of Wells as a person (and his other work) that’s putting me off associating it with the book.

Obviously these exist and could be explored in a modern day setting, but there’s something about overconfident british imperialists vs impossibly powerful aliens that’s compelling.

See, I wasn’t overly interested in this setting and with this hook, now you’ve got me interested.

My inclination would be to acknowledge it with the foreword disavowing his horrific opinions. Especially the bit about HG Wells spinning in his grave at the idea of a diverse cast of victorians teaming up to survive the Martian invasion. But that’s just me.

It’s quite different to your scenario since it involves real history and not an author of fiction, but when I was working on my western FitD hack I also had to think hard about how to approach the problematic material of history (and a time/place particularly rife with problematic views!). I ultimately felt that sanitizing these things, especially in the context of colonization and a time period that has already been heavily white-washed in popular media, was not viable. So I came up with this mechanic and approach (work in progress!) below. Again, probably not that relevant to your project, but maybe it’s interesting. 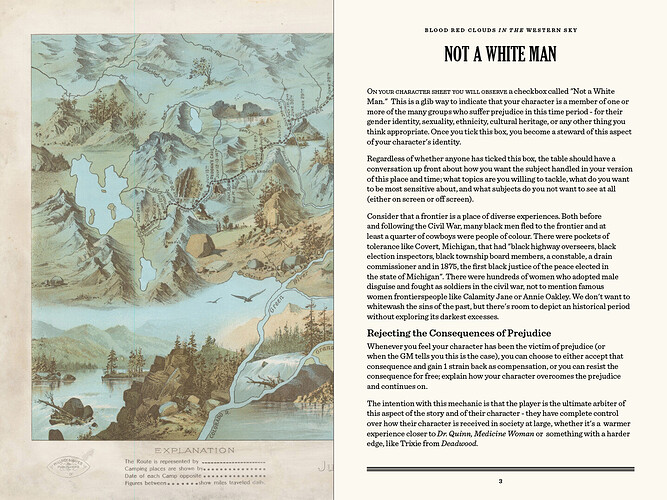 You might be greatly overestimating the popularity of the HG Wells name.

Sure, the guy is a towering pioneer of science fiction literature, but he’s not an household name like J.K. Rowling, nor a “nerd-household” name like Lovecraft.

Most people won’t care at all, either way - they will hardly recognize the name, they won’t know about his racism, they will just assume the setting to be a “generic” alien invasion thing (Independence Day, Falling Skies, you name it), etc.

@Erich I hope so!

@timdenee That’s a really good way of dealing with it. I’m really tempted to put something similar in, I really like how it can be made mechanical or narrative, or ignored completely

@Francesco_Pregliasco You’re probably right, but it feels better to preemptively address something that people might not have noticed otherwise rather than addressing it after the fact if they do.

Thanks for your help! I think what I’ll do is just change the name and keep the foreword saying what the setting is based on.

I don’t know who HG Wells is but I do know who Lovecraft is and we have this kind of discussion in our tabletop community all the time. For me personally, it ultimately comes down to separating the art from the artist, which can be quite liberating. It is totally okay to be able to enjoy something that just happened to have been created by a terrible human being. The art is not the artist and we shouldn’t have to feel guilty for liking the art, it doesn’t mean that we agree with the artist and their beliefs and I think society understands that by now.

As for you using the setting, if it’s something you’re passionate about then go for it. If you’re worried that someone might recognize the setting, it’s easy to simply change the names of places/people/things while still leaving the overall feeling of the setting intact (I will have to do the same for my FitD, not because the setting I’m using was written by someone with questionable standards, but because I would rather not accidentally get a copyright infringement notice from Sony).

Ultimately, it’s the things we’re the most passionate about that gives the most pleasure working on and, sometimes, that can make the difference between seeing a project through completion or dropping it halfway there because we lost motivation somewhere along the way.

@timdenee That’s a really good way of dealing with it. I’m really tempted to put something similar in, I really like how it can be made mechanical or narrative, or ignored completely

Have you had any further playtest experience with the mechanic?

Good question! Unfortunately I parked that project not long after I started it, so I haven’t playtested it much at all - but as it happens I am planning to return to it in the next couple of months and put together a playable alpha, so I will report back.