How I set up Blades in the Dark on Roll20

This is a report of how I set up Roll20 for my crew. If you’re here for tips on setting your own game up, I suggest you start with the official guide,

I started with the Blades in the Dark pdf from DriveThruRPG. Easily tied for the best US$20 I’ve ever spent. I read the rules twice, taking questions I had to discussions on the web, which were super useful in clarifying the game’s design.

Warning: As a new user I only get two links, so I redacted all the links below. When I get enough reputation, I’ll replace it with the version with real links.

I then clued my players in that we’d be playing Blades in the Dark. They’re not so big on reading rules, so I suggested a YouTube overview by Johnny Chiodini (link removed). They preferred this one (link removed) from Dave Thaumavore. Others were too long for them. We all really enjoyed Stream of Blood x Glass Cannon’s game (link removed), run by Jared Logan. That finally gave me the confidence to start running myself.

which appears in Fate Worlds Volume II: Worlds in Shadow. Rogers is the showrunner for Leverage, and this is the thing to read for how to set up a heist or a con step-by-step. I followed his instructions for the crew’s first heist and I felt it served me well.

Setting up on Roll20

I organized the handouts into the following groups, the first two of which were visible to players.

I would’ve happily paid for a Roll20 module where items 1–4 were already set up as a module. Even more so if the kind of views of the districts illustrated in the official Roll20 guide were included. It seems like it’d be trivial compared to the work that went into those character sheets, but I’ve never tried working with Roll20.

P.S. I truly appreciate the beautiful typesetting and iPad-friendly format and fast pdf load times of the core rulebook. Usually, I drive everyone around me to distraction complaining about rookie typesetting errors like too-narrow margins, headers set between sections rather than closer to the section they head, headers at different levels that are not visually distinct, indenting and adding space between paragraphs, monospace fonts whose x-heights don’t match that of the serifed fonts they’re paired with, top margin not narrower than bottom margin, a riot of font families or colors, and so on. The usual typesetting curmudgeon kind of thing. As soon as I opened Blades, I smiled. I even like the heavy headers for indexing, small caps for technical terms, and bold for instructions. It helps with visually spotting things, so I’m happy to leave page “color” consistency to non-reference books.

I had the same thought when I first read the pdf, then the book. Despite (or I could argue because) being black and white it was the most pleasant read I had in a long time when it comes to rpg books.
I still have traumatic memories of Pathfinder v2 core rulebook, so much so that I haven’t mustered the strength to play it yet.

Excuse the necropost, but I found the OP really helpful in setting up our game in Roll20.

A couple of additions that I found useful:

1. Evil Hat Productions Duskvol Bundle
They did indeed put together the following in a pack (https://marketplace.roll20.net/browse/bundle/7664/blades-in-the-dark-doskvol-bundle):

I’ve got medium use out of this, possibly not worth $20 for what I’ve used, but I don’t mind paying out to Evil Hat a little more for the joy I’ve had in this system.

The handouts are useful, though I find Roll20’s handouts fairly clunky. I replaced the map with aged versions of the detailed street maps and @monkeyEcho’s version of the main map. One thing I love is the city area background with John’s trademark graphical style wot I love. Probably my biggest criticism is that the faction status tables are rendered graphics, so as soon as you want to add a single custom faction they are less useful. Shame - they are pretty.

It’s worth noting that you have to select this extension at the point of starting your campaign. I didn’t realise and had to start again to make use of it.

2. Player manipulatable maps
Having setup a central pinboard and desktop like most other groups

, I made a rollable table for each district map with a map graphic first and a closed scroll graphic second. I then used an API script (you need roll20 pro for this) to make it so that dragging the scroll to the right side of the screen unrolls it and dragging it to the left changes it back into a rolled scroll. 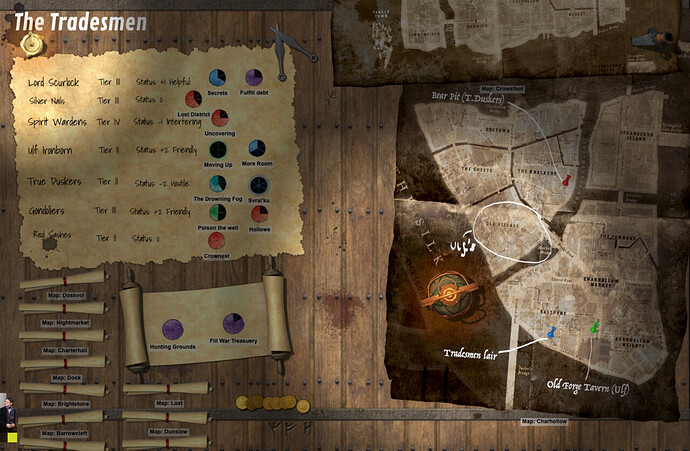 Here’s how that works (players can do the same as the GM here):

If anyone’s interested, this is how you make this work per map:

I love the balance John makes between concrete details (factions, names etc.) and leaving blank spaces (what does the ghost key do?!) But with the emphasis on generating content on the fly in adventures, I find myself in the need of an NPC with a name, look, background in the middle of a sentence. I know some people pre-generate lists of these, which is sensible, but continuing the theme of minimal-prep, I’ve been setting many of the rollable tables from the book as rollable tables in roll20, accessible from macros, so I can type e.g. #person and it’ll output me a couple of random people with names, origins, looks, characteristics etc.

This approach is not without its downsides. If you have the book open at the right place, scanning the table while talking your eye will often fall on something that inspires you. Random output does not support this scanning, but some randomisation helps with creativity, forcing you go with something outside your normal “obvious”. I split the difference and output 2 examples whenever I need a person, place etc. And then I can scan over just those examples very quickly while describing.

I did a fair amount of copy and pasting from the book pdf, and they are not hard to create in Roll20, but it is time consuming as there are a lot of entries if you include things like names! Unfortunately I don’t know if it would be possible to share these tables. I suspect Evil Hat would want a say with their content

I love the idea of having the character generate right in Roll20. Thank you for the idea! As I’m fairly new to ROll20, is it possible to share rollable tables like that?

Here is some tricks we’re using in my campaign: 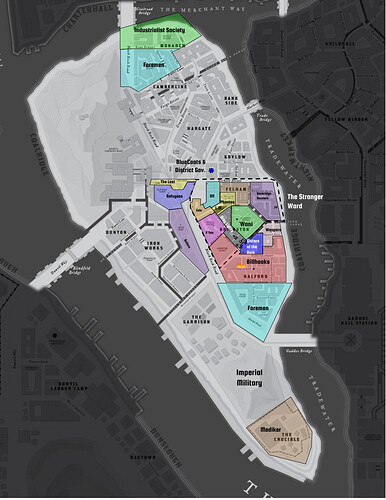 Hey Rob, I love the look of those maps! Would you be willing to share how you went about giving them that aged look? I also bought the Doskvol Street Maps and would love to give them the same treatment you did!

Thank Chris. I used gimp as I’m too cheap to buy Photoshop, and layered some folder paper and stain images over the map. I’ll dig out the royalty free images I used and post them on here if I can.

That would be awesome Rob, thank you! Sadly my own art design skills are woefully lacking, but this will be a good excuse to finally brush up on those a bit.