How Many Tics on the Vault of Heaven (Spoilers Speira)

Hello! I finished running AGON for the first time tonight. My players cleared the island of Speira. When marking the Vault of Heaven I figured 2 tics on Zeus (since they stopped the drill from cracking the gate of Tartaros) and marked one for each of their Honored god. So 5 tics on the Vault. And marked two wrath for Hephaistos (since Zeus prevailed). One player used his bond with Demeter and they all ended up with 1 or 2 favor at the end of the island.

Does that seem like too many tics on the Vault? After the sacrifice on the voyage they’ll likely have around 7 or 8 divine favor and a bond headed into their second island.

My reading of this section is that it really depends on a number of factors:

The campaign guidance says that you can have a short campaign after completing 3 constellations or longer with 5. At your rate you’ll probably complete 3 in just a few sessions; if that’s ok with the table then that seems just fine. Of course, none of these are hard rules. If your group wants to keep going your are in no way limited to even five constellations. 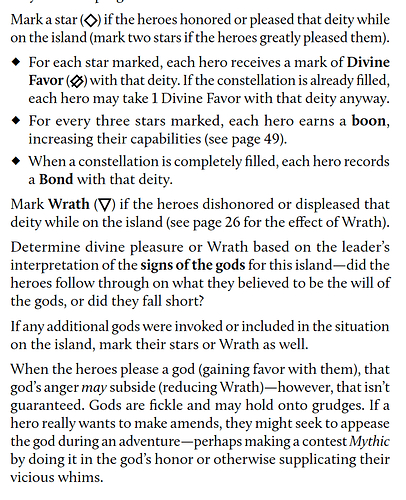 Yeah, I went over that part in the book. I figure when an island is completed any of the gods for which there are portents will have some sort of movement on the Vault - in this case Zeus and Hephaistos. And since my player who is a demi-god of Demeter used his bond I figured she was watching how things unfold.

I’ll probably revise the amount of tics down a touch. 2 for Zeus, 2 wrath for Hephaistos, and a tic for Demeter.

What I’m really trying to avoid is an overabundance of favor from the gods. I may try rewarding it during play for good role playing or awesome ideas.