Last year I had a friend who was making some art while stuck in doctor’s waiting rooms. It was cool in that old school RPG way, two color (because he could only bring 2 brush pens) and more than a little spooky (which I love). I suggested that he needed a game to go with it. He asked me if I wanted to try writing one. 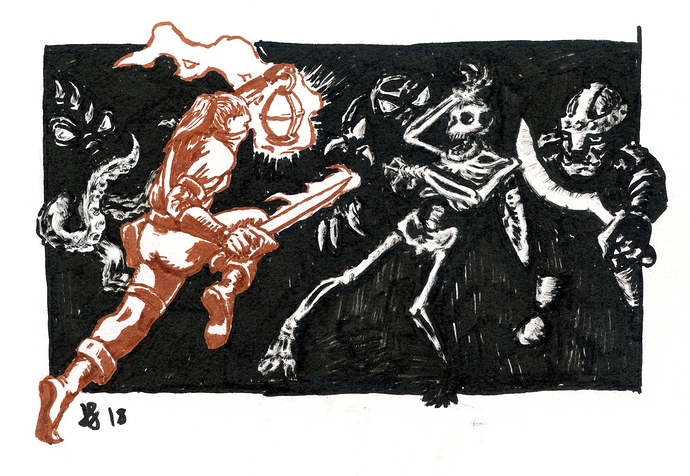 I put this together in 2 weeks for Big Bad Con. Some really cool peeps helped me playtest it

It went shockingly well. It was tiny, it was old-school, it was spooky. We had a great time. I asked a few friends to read it, and I kept adding bits until people other than me could run it. I’ve really enjoyed reading a couple of the AP reports. 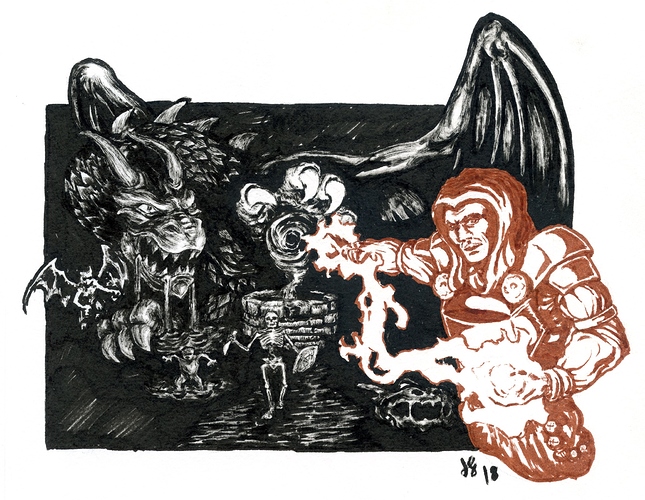 I wanted to talk about the system briefly. I wanted to make something that’s familiar (and what’s more familiar than small dungeon crawling games ^_^) but also fairly minimalist. I wanted to make a tiny blades system that is so bare bones it would help people leap into designing their own hack in short order. I wanted to see how far I could push some of the design and still have it feel like Blades to me.

I really like it, but of course you’ll have to judge it for yourself. 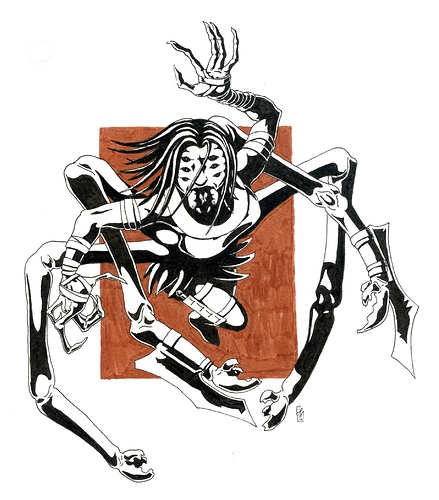 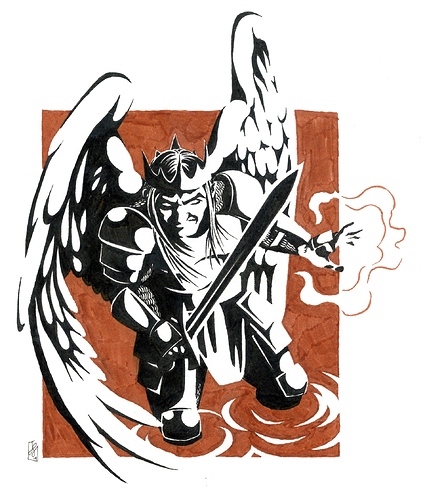 Should be releasing it Monday. Hope folks check it out

I’m planning to run it for Halloween!

I just picked it up

Read through the rules, really loving everything that I’ve read.

Removing position and effect is interesting. Do you find as a GM that you are aware of it anyways?

Hi Stras,
As always it’s great to see another game from you. Will be playing this as soon as I can track my scattered crew down!

Will there will be a print version of this in the future or is it intended to stay as a small lightweight pdf only release?

You have to be, because one of the core mechanics is getting (or losing) extra dice from position. So you talk through the factors before making the roll anyway.

For example:
“Hey I’m going to yell and charge the Night Render” is probably a straight up roll.

Similarly: “Hey I’m risking my arm by activating this Shadow Band, can I get some extra damage?”
GM: “Sounds like a +1d situation for me, but on a 4/5 I’ll fill up this 4-clock and when it’s full you lose the limb. Sound fair?”

It’s not as robust in some ways I find, but in actual practice it acts very similar. It’s kind of a lightweight implementation that helps speed up the process.

It’s a super lightweight game (so a print version would be more of a booklet than a full book). That said I did lay it out in 5.5x8.5 format intentionally (that’s Monsterhearts book size in case you need something for reference) and I’ll definitely at least take a look at print-on-demand if not actual print options. No promises about when though.

That makes a lot of sense, equating position and effect to dice feels like an evolution to an extent. Blades portrays criminals at the height of their game, but for most people difficult situations usually means success is less likely, not just disastrous.

Thanks you for the feedback. I really love the game. Just need to find a group for it.

Hi Stras I have a question regarding the War Machine ability from the Murkhunter playbook. It states that,

"Heavy armor you wear counts for 2 armor, and does not have a limitation on your speed."

Heavy armour already gives 2 armor, should this read as 3 armor or that regular Armor is upgraded from 1 to 2 points of armor?

Oh good catch! That’s left over from a previous version. It should read: “Any armor you wear does not limit your speed. Heavy armor you wear takes only 1 load.” I’ll see about fixing the book and sheets.

Thanks for the keen eyes @Mremann and glad to hear people are actually playing this!

Hi Stras, I’m reading through it at the moment and it’s full of awesome ideas!
One thing escapes me so far : what was the thinking behind Renting vs. Acquiring equipment?

It has to do with character goals and long term play. I’m a big fan of old-school games where getting coin is a big part of your objective, but getting coin for coin’s sake is pointless. I didn’t want to do “coins equal xp” (partially because of xp-math staying simple) so I gave it a motivation: get yourself some gear. Remember that in FitD that grind and the desire for coin is a big part of crews (though there it’s to buy more downtimes… which here you don’t have) … so it’s one of the ways I left it in. Plus having gear lists and people thinking about gear is very old school. Much of this game is about a feeling, and remembering what it’s like being a kid pouring over lists … … … without including actually 30 pages of gear and such. A lot of it is simplification

Also I love hearing folks post-game talk about their goals, and how many trips it would take to get a thing permanently … it’s really cool to see the game itself sort of incentivise them to think about “next time”.

There’s some other minor reasons. I like that the shadowbinder is super expensive to run on gear so it raises the question of ‘who gets how much money’ and the like. I like that you can’t just go in, and if things get hard bail … because you may not be able to pay to return. So on.

Hope that answers the Q

Absolutely does, thanks! I’ll re-read it with that in mind.
It’s fascinating to see how your approach changed between S&V, BoB and this!

One of the things I’ve seen with a lot of FitD hacks is folks adhering very closely to the intial format. I wanted to put something out there that I’ve playtested a fair bit, that’s pared down, and shows some more traditional mechanics fitting in the Forged framework. I had this dream of folks using it to build out more on the platform, but it hasn’t really caught much attention ¯\_(ツ)_/¯ So it goes sometimes!

I just read the book for the first time. Gorgeous art, interesting ideas, and of course I love the BitD-style tables of inspiration! I particularly appreciate how the art style reinforces the tone of the game.

I’m confused about HP, though. As a GM, how do I decide when HP loss is a possible consequence? And how (if at all) do I telegraph this to the players before the dice hit the table?

In the extended example on page 24, Tinny-bell rolls 5 on a Prowess+Skirmish roll intending to keep a Murkbeast at bay; the GM declares he takes no damage (“I think its claws and teeth bat you around, but your armor largely soaks up the damage”), apparently without rolling any dice. But when Tinny-bell attempts to tie up the same beast later in the scene, rolling 4 on Prowess+Skirmish, the GM rolls damage for the beast, wounding the character. What’s the relevant difference between these two situations? It’s hard to see why damage was dealt in one but not the other. Yet it matters a lot: just the single damage roll would have killed the character outright if it weren’t for armors and resistances.

I suppose there’s a similar ambiguity in Blades with respect to whether Harm is suffered. But I find that in practice the fictional positioning makes it very clear if lethal Harm is a possibility, usually in time for the PCs to decide if they accept the risk (“Backed into a corner, she pulls out a knife”, “Arcs of lightning leap from the barrier, illuminating the bodies of fried rats below it”, etc). Here it’s a little, ah, murky.

Thanks for the Q’s.

When is HP loss a possible consequence
Go with the fiction and your gut. If you’re worried about it, talk to your players. It’s ok for them to ask “ok how deadly does this idea look?” and just be up front and tell them “that’s a mighty beast, I mean this could be pretty deadly”

Most of what you’re describing as your examples in the last paragraph seems on point.

Let’s talk about the example.

You’re right that I didn’t flag something hard enough. The beast is big, and if he’s trying to fight legit, Tinny would take some serious wounds. But in the one roll, he focuses on just fighting defensively and being in its way. He’s not trying to hurt it, just use his armor and shield to keep it from hurting him. So on a 4/5 I quoted limited effect in a fight: You manage to keep to no harm, but gain no progress, and don’t harm it. I should have been more clear.

This is a pretty deadly game. So it’s ok to put damage on the table whenever folks are engaging, but in particular we had a defensive Murkhunter build, in huge armor with a shield, so I thought it would be appropriate. But as blades is wont to do at the end of sections, ask the question:

Would I have done it this way?

And the answer could change at your table.

Hey, I just bought Into the Dark on DriveThruRPG and really like it!

I stumbled over the War Machine ability for the Murkhunter as well. Any chance of fixing it?

Also, it would be nice to mention on page 8 that toughening is used for resisting. It took me a while to get the meaning behind toughenings (its only mentioned on page 6 but without being in bold font).

One last thing: Stress is only recovered after each expedition, right? Or do you recover e.g. 1 stress when resting?

Stress is only recovered after each expedition, but you can always house rule it and see how it feels!