My players elected to stay one more round in Fort Calisco, and here are the missions I prepped for them:

Operation Slippery Slope, Assault Mission
A rider appears bearing bad news: The Southern Wall are taken. During the night, lit by sickly green flares, Blighters forces managed to overwhelm the southern walls. Flooding the through Horror mined tunnels the soldiers were besiegers from below, and Warped sprinted up ladders and besieged from above. It was a slaughterhouse. Jonakas forces are heavily overleveraged to the north and cannot respond to this development in the siege of Fort Calisco in time. Orders are to move out with Zora and hold some streets in the south until Jonakas can scramble forces to relieve you.
Rewards: +2 Morale, +1 Supply
Penalties: +1 time

Operation Golden Boot, Supply Mission
A disheveled merchant called Johannes Erlinger are telling tall tales about a caravan of lost gods wants the Legion to retrieve it. The merchant has heard rumors about the Legion and does not trust them enough to give up the location, and demands to go with them, to oversee the retrieval personally. The caravan is sure to be beyond the walls of Fort Calisco in enemy held territory.
Rewards: +2 Supply (+1 Horses if Johannes is unharmed)
Penalties: None

Operation Dark Corner, Supply Mission
Steinar of the Trapped has approached the Legion about a job. Many civilians have in the last days fallen ill and are now showing signs of blight. Disease was already a problem before but the with blight running rampant the situation is quickly deteriorating. Several of Reinbachs men have reported seeing muddy water come up from the well and have heard odd noises in the night. Investigate the well and stop more blight from spreading.
Reward: Alchemist (with 3 ticks of corruption already), +1 supply
Penalties: -1 Morale

They chose Operation Slippery Slope and we will play it on Tuesday. Time to Prep Away.

Finished around half the mission: 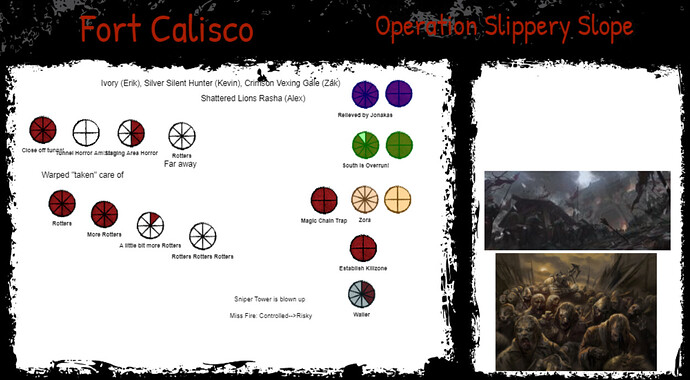 This was by far the closest mission we have played! The players shifted strategy halfways and Wailer kept blowing up Rookies right and left. 4 Rookies died on the mission plus 3 on the secondary and 1 from penalties for failed missions, so by far our bloodiest round yet.