My A Fistful of Darkness Messy And Infrequent Session Log

Two seasons in Doskvol, then one in the wastelands of Glow in the Dark (link), and our group is moving to yet another genre: WEIRD WEST!
Here’s a link to the A Fistful of Darkness topic: https://community.bladesinthedark.com/t/a-fistful-of-darkness-gunslinging-humanity-versus-impending-doom-coming-from-demon-infested-mines/170

We’ve actually already done three sessions already, and the players have a posse of amoral (on average) Bounty Hunters, getting into trouble.

I just finished up some more clutter on the gameboard, I’m trying some new stuff. I’ve added unnamed clocks for the player to see, job offers are poster glued onto the wall with flour glue (cheapest way to stick paper to a wall in the late 1800’s), but I’m moving away from posters to weekly notes by (presumably) the player characters.
Always experimenting. 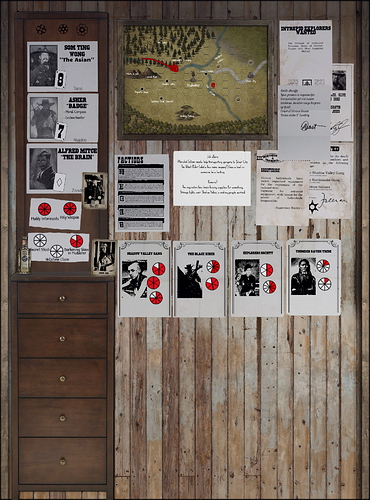 Thanks for the feedback @Tubal this is very helpful. See, I have to change something to make it perfect!

Hope you have more fun with the setting and big thank you for pinning cool pictures and playing my game.

They’re gonna have to pull some jobs to actually GET the Holy Weapon and informants… and I think I’ve got some bad shit waiting for them.

The Black Rider is actually an undead cowboy, it just doesn’t show up well with the filters I use

I have a black, mostly transparent, gradient as a separate image on top of the map layer. After the session I’ll move the bright white note paper from the token layer to the map layer and it will darken and become part of the background. A little trick for ya

I’m just layering on more and more paper as the game progresses, it’s part of the concept I have for the gameboard.

Hint: Rolling Copy on the daemonic aspect table and watching a comedy drawing video featuring Tsathoggua has mixed together into a black sludge that I will paint the w̴̳̘o҉̩̤̘͉r̫l̘d̬͇̞͓̳͔̜ with. 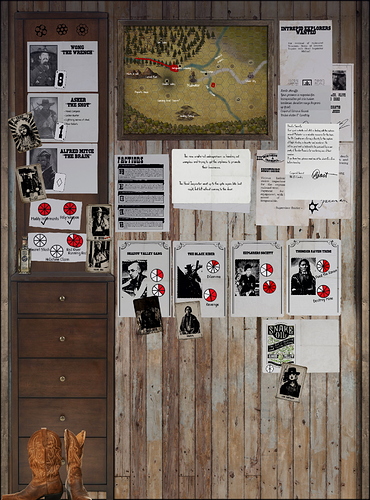 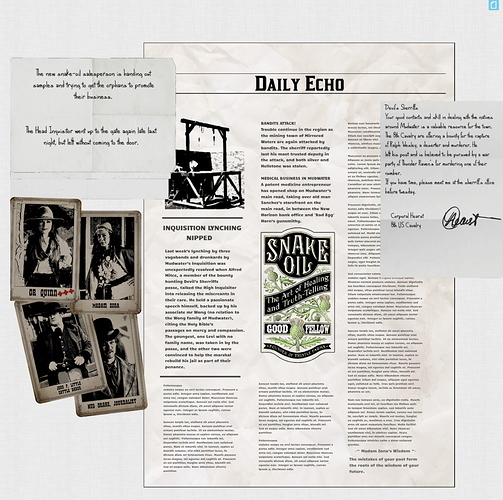 Here’s a recap of the crew’s shenanigans so far:

And that’s the main points I think o_O
Last session two of the players got Stigma (Trauma) and the last had 1 Grit (Stress) left. They have little money, a lot of enemies, and a few friends. The Wrench was insane, with voices in his head. The voices are actively working for Raizhell now though, and in addition he’s fixated on a bible he stole from the corrupt church that’s not in a human language. And that’s not even taking his Scarred Stigma into account, making him fear darkness.
The Shot has a compulsion to do the right thing (Ability) and Cursed (Stigma) , while The Brain is Corrupt (Stigma) with greed.

I knew I was setting the difficulty higher this season than I usually do, but I’m feeling a little guilty about it now

Sounds AWESOME! I see that my own games are not weird enough. Too much gunfighting, to few vampire blood rains.

Oh it was still a gun fight, although the last blow was struck with the clearly medieval sword The Shot is carrying around.

What happened this week? What DIDN’T happen?

The crew got a pretty straightforward bounty mission from the cavalry. One of them had killed a native and then ran for it when he figured out he’d face justice for it. The cavalry knew a war party was going after him but didn’t want to send their own squads to avoid provoking the native americans even further. Enter the posse.

The figure out he’s heading to an outlaw trading post down south called the Dancing Devil Tavern. It’s the remains of a small outpost where the only real business left is a salon, a hive of scum and villainy if there ever was one.

Their Modus is “Traps”, so of course that’s what they plan to do, so they find some people going there on legitimate illegal business and plant rumours with them that the natives will hit the saloon because of the cavalryman while they travel down there with them.

A desperate engagement roll later and they’re attacked at night in their camp watching over the outpost. Turns out the elk-monsters from session 2, dubbed Leshen by the players, is actually the remains of a different native tribe who decided to go along with the changes Hellstone brings rather than struggle against it, and are now horrifying monsters.
The main problem aside from two horrifying elks was alarming the saloon, but they managed to fight them off relatively quietly, spot the cavalryman leaving the place because of the rumours, and realize the war party of the first tribe of natives are also hiding and trying to ambush the guy.
To cut it short… two of them go and talk to the natives, and gets them to let the posse take the guy in in return for their medicine man getting to follow him to see his sentencing (at the cavalry fort), The Shot goes and captures the guy with a lasso, he triggers the alarm clock finally and they escape into the night with the natives and the prisoner (who gets a bullet in his butt).
The Plan invites the cavalry corporal who gave them the mission to the farmhouse they live in, and writes a letter to their superiors, as well as explaining proper procedure to the corporal so the medicine man will be able to come and visit the fort and leave with no trouble.
Success, major payout, everything’s fine.

Except the Entanglement roll comes up a 6.

I do some quick re-planning and reveal one of the town factions is actually a front for the Shadow Valley Gang. Their leader is infiltrating and poses as a snake-oil seller
The get their friend the marshal to come along and do a search, he gets set on fire immediately, The leader gets a railroad spike in the leg trying to escape from The Wrench’s pneumatic rifle, The Shot fails multiple times to kick them unconscious and gets set on fire too, The Plan ALSO fails and gets set on fire.
Eventually they get her tied up and the fires put out.
The Plan gets the Inquisition to come and pick her up since gangers have gotten out of the regular prison, and they probably have ways to keep people like her secure.
Head inquisitor Michael shows up with some goons, takes her into custody, and holds a speech to the townsfolk that’s come to look at the commotion.
Naturally the leader of the Shadow Valley Gang is going to be burned at the stake as a witch sometime in the near future.

Session ends after all that, but The Shot’s player comes afterwards and wants to have a scene where he interrogates the leader together with the Head Inquisitor

I improvise, the Inquisitor and the Leader does opposing rolls, both get 6’s… Obviously he’s successful in interrogating her, but it still doesn’t work, so I take inspiration from the portrait I picked for her: she changes her story constantly, but they’re all true, joker-style.

It turns out the power of the gang is that the leader takes on the souls (possibly) of all their dead, and therefore they have a kind of immortality. She’s impossible to interrogate unless you get her to focus on one of the personalities, but since they’re all dead you risk having them relive their deaths and go catatonic.
It also occurs to The Shot that if she’s killed her power could probably be taken up by another ganger, as long as they have their daemonic skull artefact. Also they have power over fire

A lot of improvisation this week… I mean more than usual. I almost never have things figured out in advance

Wow, yes, a lot of improvisation which is hate-love for me: brings out so much unexpected story twists but costs a lot of energy.
Cool story, cool weirdness.
How much Doom they have now? Is there a Rider coming up?

It’s kinda doing ok on the Doom front… The were 2 away from ticking over, and rolled 1 to lower it, thereby raising it instead

Now they got their Holy Weapon, and some cash to work on stuff, but… The dam holding the Red River at bay is going to break any time now, zombies are infesting the old mine tunnels below town, tunnels that are collapsing into sinkholes more and more. The cemetary is actually one big sinkhole from the worldbuilding in session 0 so I’m just making that worse really. They just got into a Feud with the Shadow Valley Gang after imprisoning their leader who was trying to infiltrate the town, so the gang is probably going to do something about that…
We’ll see how that turns out…

Oh yeah there’s also the awoken daemon and his town of duplicants, the tribe of natives that fused with elks and are trying to drive out anyone else from the area, what else did I forget?