My detailed street-by-street maps of Doskvol are finally done

It only took a year or two longer than expected 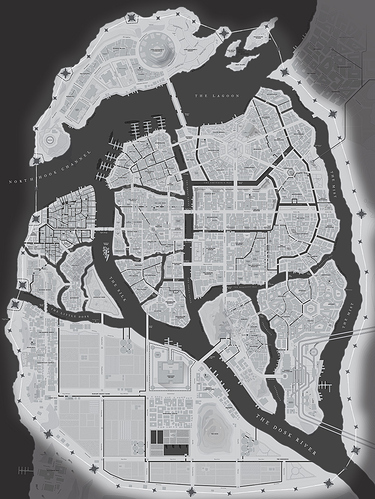 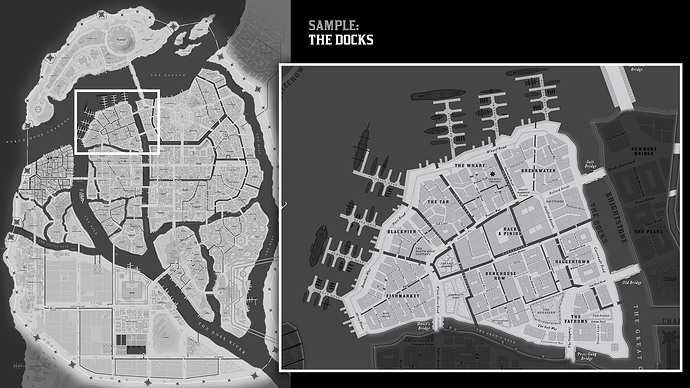 Most of that delay was my fault!

So happy to see these awesome maps out in the world, Tim. Amazing work.

Purchased! I’ve been sitting on that drivethrurpg gift certificate for too long

Was this part of the Kickstarter or a new stand alone product?

Purchased! These are amazing Tim. And they strike a great balance between having enough info for inspiration, while still leaving plenty to the imagination. Very excited to use them in play

Thank you! So glad to hear it.

Oh, these look beautiful. Couldn´t help but buying them immediately.

Those maps are beautiful. Immediate purchase. Exactly what I needed, without need for subscriptions…

I like the attention to detail and how you provided sections of and overall view of Doskvol (with acceptable level of abstraction remaining for those of us who imagine Doskvol bigger or smaller.

I have been playing with these maps since the week they came out. I can’t throw enough love in your direction!

To paraphrase John Harper - maps are a great resource for creating ideas and stories, and though I love the game beforehand - these have broken new ground for me.

I can really picture Doskvol as a massive city now - I can appreciate the scale was originally abstracted in order to give the players some flexibility - but now… now I LIVE there - I can almost see it.

As GM, these maps have been indispensable for creating new, exiting locations; for judging scale and tier; for giving me ideas and flavor for the players; for creating histories; embellishing my descriptions and figuring out what effect these places would have on the personalities of my NPCs.

Bit of an over-earnest cringe post, I’m afraid. I just wanted to tell you these are an awesome tool - and to bump them up again for anyone who has missed them.

Hey I really appreciate it, thank you so much! So glad to hear it.

Is there a scale? I know that details are deliberately vague but is there a ball park figure for those of us using Foundry VTT or some such?

There is no scale, since Doskvol does not have a definite size.
It’s trivial to make up any scale you want, though!

(Spoiler: whatever scale you choose, it will be “wrong”, e.g. you’ll either have some buildings that seem way too big, or the city itself that seems way to small. When I say “Doskvol has no definite size” it does not mean that John Harper know its true size and has been hiding it from us ^^… it actually means that Doskvol was never conceived to be drawn to scale. Think of it more like a symbolic map, than a satellite photo)

Yes, I (intentionally) have no idea. I haven’t actually used Foundry VTT, but if it insists on a scale… Google tells me “the standard distance of one city block is typically 311 feet long”, so you could take one average-sized city block on the map and say that’s about 311 feet, see how that treats you.

Our group switched to your new maps and they really make things come alive. Also enjoying creating overlays (political, socio-economic, etc) and the quality of your work makes those overlays all the more helpful. Thanks! Worth 2x the price!

Thank you, I’m so pleased to hear it!

Great work @timdenee
As has been said, your map instantly makes Doskvol real to the players. I personally like the many place names which are by themselves kick-starters for scenario ideas.
However, as a GM, I’m a bit worried about the large number of parks in the city. In a sunless, Victorian, and highly criminalized world, I find it hard to justify the city creating parks in every neighbourhood with expensive alchemical trees.
Fellow gamers, how have you handled this in your games?

Thanks for the kind words.

I like to have some variety in the urban space - a change of scenery if nothing else. Also urban parks were a Victorian invention so I find it hard to imagine a Victorian city without them.

I’ve always imagined that while there are glowing alchemical trees, especially in the fancier districts, the poorer parks would be a sad affair. Weedy, dying plants that can’t (and won’t) grow without sunlight. Maybe a couple of dead trees, skeletal against the sky. Cobblestones and mud, refuse blowing around in the wind. A “park” in name only.

For me, there’s something more dystopian about a pathetic attempt at a public “park” provided for the poor than no attempt at all. Especially when the rich districts have beautiful, lush, manicured parks worthy of the name.

Anyway, that’s just me! I would be interested in what others think.

I´ve assumed that most “parks” - especially in poorer areas - are plain earth or sometimes cobblestone with a statue or some other landmark and maybe some moss. Trees are really rare and kept for the richer districts.

I agree that the poorer areas wouldn’t have much growing in them - not deliberately anyway. Mosses, weeds and the likes though. But statuary and some open spaces - maybe some bridges over the canals - would be in keeping.

Cobblestones and paved areas though… Do you think the skateboard has been invented in Duskwall? I can imagine such areas being taken over around dusk as the local youngsters race around the place on whatever mode of transport they’ve managed to make for themselves.