Questions from (yet another) newb

I’m hoping to start my first BoB campaign withing the next week or so, and have some questions… I had a few more to start with but have found some answers in these forums.

Sometimes you can put segments on a clock by doing things that aren’t “HP” damage. To fight a Horror you might have to get inside it’s reach. That’s a scramble, but it makes progress towards defeating them. Put some ticks on. You don’t close ranks and just swing until a clock fills. Remember that a clock is an “encounter” more than a single person. Swinging on Render? Yeah probably sparks fly, he takes a hit, he doesn’t go down. But many of the others you have to (as a GM) kind of puzzle through the encounter and think about what sorts of things are on that clock.

Don’t over-strain it. If they do a lot of setups, a single shot might have a whole lot of effect. Enough Aim and pushes, and you’re doing significant chunks of that clock.

(Edit : O sh*t. Stras has answered while I was typing. I hope I haven’t written too many bullshit.)

TLDR : I’ve answered every question except the last one, which is part of a much wider problem. I’ll answer that later, and others can give their opinion too (and ofc check if I haven’t written too many mistakes in my other answers).

Officers, Heavy, Soldiers, already have armour at light load, so they don’t need to take it in the utility slots. Rookies can. The others, who don’t have Armour in their utility load, can’t, except when it’s included in their load. This is the military: you take the equipment which is given or available to you.

Or, somehow, you convince the QM or one of his aides to equip you with something with is not on your list of utility. Good luck.

Yes. It is not the character, but the equipment which gives the threat level.

Yes. Light load could give you better position or effect in certain circumstances.

No. You have a total of 5 ammo. You can shoot five times. But you don’t need to reload between two shots, because it’s a revolver. So you could decide to spend all you shots in one action, as per the exemple in page 76, to get a bonus.

BUT but but… it’s a little bit more complicated. Ammo is not exactly 1 ammo = 1 shot. One ammo is “one SHOOT action”. It could be a salvo, if you have time. Look at the exemple of action p 224.

Yes. Or no. You could decide to make it several SHOOT actions, or only one. Zoom on every shot, or not.

+2. Page 245 : " Dwayne nods, marks a point of corruption, and grabs an extra die. He rolls and gets a critical! “Holy smokes! That’s what—five segments? This rig really pays off. Are we done here?”

I would say you don’t use flashbacks to provide assists.

When you assist, you somehow take part in the action, directly or indirectly, but you are supposed to possibly suffer the consequence of the action . So you can’t assist “in the past”.

Only the Officer could do something like that with “logistical support”. Channels are a sort of flashbacks.

Yes. They keep it AND gain their other Specialist action. See exemple page 111.

If it stays in the fictional limits, yes. Yours to decide.

Scale 1. Except the Infamous Devourer, Silver, which is scale 2. Ache the Infamous Heartless could be scale 2.

Not all horrors are scale 2. Only some of them.

This is a question that has no fixed answer, and which has been the object of many discussions without consensus. It is linked to the wider question of clocks in combat.

7 . This is where I am on this now: wound is equivalent to harm, the Marshal sheet only sees the highest level, the example image ticks being on the right (vs left) doesn’t mean anything, after level 3 (say) wounds are completely healed for a legionnaire then you’d update the Marshal sheet to show unhealed level 2 harm (assuming the legionnaire had both level 3 and 2 at the beginning of the example). Have I got it correct?

14 . I’m ok with failed (or even partial) attempts to attack here, it’s just successful attempts that are a bit difficult - if a heavy says “I smash Viktoria with my hammer” and rolls a 6 then they really have hit her with a big lump of metal and I’m struggling to imagine a good way to play to her clock.

The only solution I can think of is to describe the fiction in a way such that saying “I smash her with my hammer” isn’t fictionally appropriate (because fictional positioning says you aren’t close enough, you can’t see her, etc) and therefore the player won’t say that (until I do make it fictionally appropriate). They’ll say something appropriate to the fictional positioning (“I start climbing the cliff behind her”/“I hold my breath and close my eyes and run through the fog cloud”) that will represent (if successful) ticks on her clock.

Or codify the above, and split her 10 clock into a 6 and a 4, the 6 clock needs to be overcome first and is unlikely to involve physically harming her, and the 4 clock will be for a situation where physical harm for her is possible/likely.

Remember (page 51) that you have to have the ability to hit her. To new players who are used to more traditional hp model and just running up and swinging a bunch I frequently say: Cool. We’ll get to you hitting her with the hammer, but tell me first how you survive the cloud of acid from that trap you set off, and fight off this swarm of ghouls around her. I believe that yeah, you’ll do it, but we gotta back up and see how and if it costs you anything.

If you are at the “hit her with a hammer” point she should already be at 2-3 ticks remaining. So your idea is great.

I ran a BoB game on stream on Actual Play … the players had a similar issue with the Doctor. And the answer there was: He rides on a customized horror. Might be handy to take a look at that (sorry I don’t have a timestamp handy)

But I think you’re nailing it. Powerful enemies who aren’t just physically beefy are more of a puzzle fight. A few clocks are a great way to handle it. You can MANEUVER up a back cliff, or SKIRMISH with her guards, or SCOUT past em, but you gotta get to a place where that clean shot is plausible first.

Now that I understand that three boxes are for three levels I think book example above is: no level 1 harm, unhealed level 2 harm, partially(1/3) healed level 3 harm.
Am I correct?
The next 4 healing points received will look like the following (top to bottom), I think: 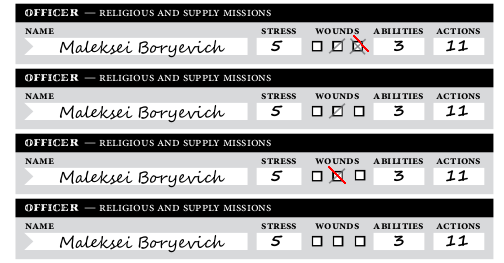 But no, I might change her threat at that point, if the other obstacles have been dealt with. Probably threat 3 (2 is fine gear, this is slightly more than that). I remember there’s a section in the book where we talk about this but I don’t have the page handy.

FWIW, the first time my crew encountered Viktoria, she was armed with a handmade assault rifle, a lot of caustic smoke grenades, flamethrower, and alchemically reinforced armour. She still got batted around pretty badly by the Horned One.

The second time, she had built herself power armour.