Rebel Crown is a Forged in the Dark feudal intrigue game with a tight, player-driven campaign and a focus on character relationships. The Kickstarter just went live as part of ZineQuest and you can check out the free quickstart here. 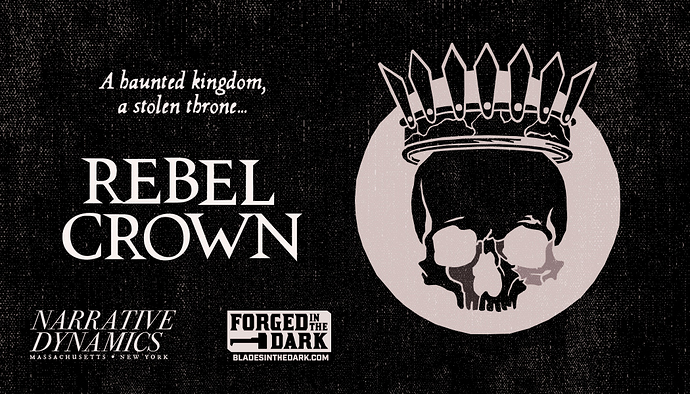 Notable tweaks to the FitD foundation:

I don’t know how practical this is, but something I would find super useful is settings/levers (or even just suggestions) on how to adjust the length of time a campaign takes to play out. Due to time constraints I would love to be able to run a satisfying campaign arc in, say, half the number of sessions.

@timdenee I like that idea a lot. I have an idea of how to start the narrative partway through for a shorter campaign (start at higher tier, with a few holdings). We’ll see if that fits in the expansion zine or if it’s something for supplemental materials.

I managed to record an actual play of Rebel Crown with @Judd Karlman, Slade Stolar, and Nicolas Garcia. It’s a solid intro to character creation and the flow of a session. I’d love to hear what folks think.

I think being able to adjust campaign length is a great idea - our gang is slowly taking over Doskvol, Legion just crossed the Tigeria river, and I hear some heroes just got lost in Mediterranean sea and need help! And now a kingdom im distress…

24 hours left on Rebel Crown. Thanks for making it happen!

Damn, missed it!
Looks like my jam, though! Is there still any way to get involved? Or at least follow the development?

Yeah, we’ll keep the Kickstarter updates public and I’ll note major updates in this thread. When it’s out, the game will be available through itch and our site. Glad to hear it’s up your alley!

I made Digital Playbooks for playing Rebel Crown online. Google Sheets makes it easy to share info and there’s even an embedded dice roller.

Feel free to make a copy for your own games:
https://drive.google.com/drive/folders/1Ru4fUZ_NIofL98IR4Fv8jOtTDnhGKVw-?usp=sharing

You can check out a duet actual play of Rebel Crown on the Party of One Podcast.

It was neat getting to put in some tweaks to make a game focused on character dynamics work with one player. (Give them a levy to command, investigate the relationship with the Claimant but keep them mostly offscreen, etc). I also always appreciate the deep focus you can have on one character in duet play.

I know duet actual play examples are in high demand right now, as a lot of folks can’t meet up with their regular groups. If folks have questions about the system based on the episode (or on FitD duet play) I’m happy to answer.

One notable system has been updated since this recording. The recovery system was a little too harsh for a game with less-disposable characters, so we tweaked it. The playtest results have been very positive: an intuitive resolution with fewer rolls and a reduced penalty for Harm.

Recovery is a long term project with a four-segment clock. To progress the clock, any character may spend a downtime action and roll the retinue’s Tier. This represents the quality of rest and treatment you are able to obtain. Another character may spend stress to assist with the roll. Completing the clock shifts all harm down one level (level 3 harm becomes level 2, etc). Additional successes are immediately applied to your next recovery clock (unless completely recovered).

The Idealist’s Physician special ability allows them to progress recovery clocks (theirs and others’) using their Prayer rating rather than Tier and grants +1 to all recovery rolls.

In a recent update we shared the rules for mass battles in Rebel Crown. The goals of the design are: 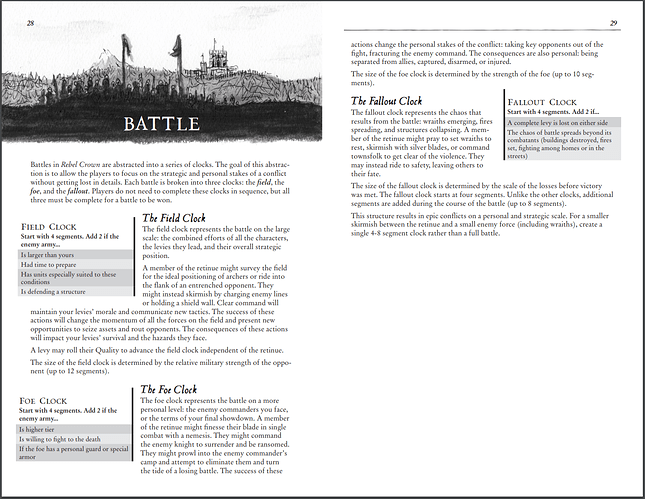 The full PDF of Rebel Crown is now out on itch.io! 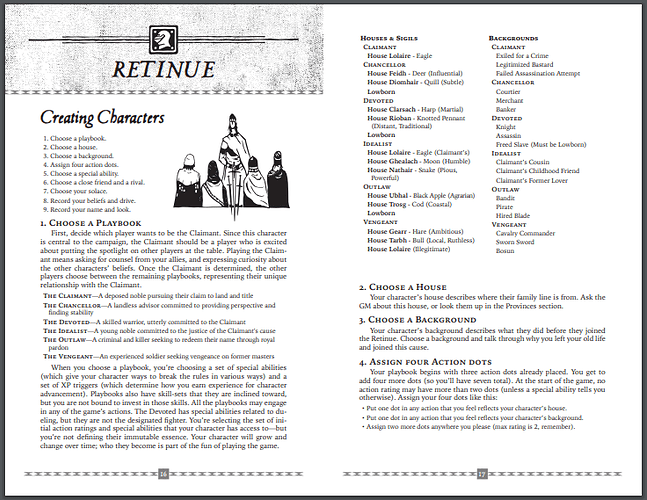 If you have been playing from the Quickstart, you’ll probably notice:

The Oak Campaign puts the Retinue in a much more favorable position at the start: ruling over their own province with an infantry levy at their command. It’s a great campaign for a group looking for a second run of Rebel Crown with new factions and locales.

The Serpent Campaign streamlines Rebel Crown into just a few sessions, with pre-generated characters and additional GM support. It’s great for convention play, or to fit a whole campaign into a weekend. It’s also a good starting point for folks looking for more guidance in establishing the scope and tone of a Rebel Crown game.

If you check it out, I’d be eager to hear what you think!

Due to time constraints I would love to be able to run a satisfying campaign arc in, say, half the number of sessions.

I’d love to hear your thoughts on the Serpent Campaign. It’s a tweak on the Rebel Crown campaign structure that pares down the campaign length while maintaining the themes and focus of the full campaign.

Rebel Crown and the campaign supplement Serpent & Oak are now available to non-backers!

Happy to chat about the design with folks who gets the chance to check it out.

Some discussion of Rebel Crown and Forged in the Dark design on the latest Vintage RPG Podcast:
https://www.vintagerpg.com/2021/03/goblinville-and-rebel-crown-interview/