Ring Down Below: Labor and Struggle in the Docks 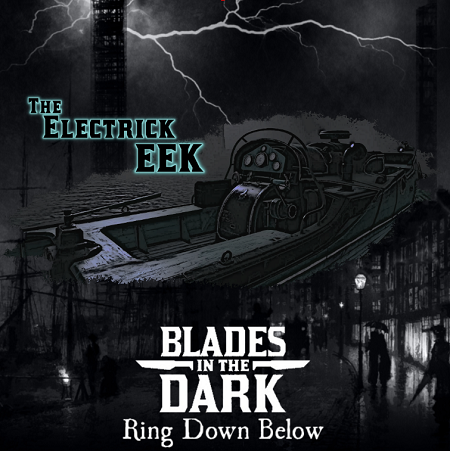 I’ve just wrapped up a campaign that I’m really proud of! Ring Down Below follows the escapades of a crew of Shadows who are illegal skiff racers in the canals around Doskvol. In season 1 they started off with strong connections to the Dockers, and used their clout and prize money to help the Dockers form a union. In season 2 they dealt with more systemic issues facing the new Dockers Local 543 (as well as a host of subplots and personal problems developed in season 1).

When I pitched this game to my players, I knew I wanted to tell a story about labor organization so I presented a few ideas:

But when I described the setting to them, they were attracted to the maritime world of the Leviathan Hunters so I suggested trying to unionize the Dockers. One of the players wanted to play a speed demon, from whence the skiff racing league was born. I wasn’t certain how well that kind of story would fit into Doskvol but I think it worked out really well! A testament to the potential of the setting for sure.

Overall, the campaign was a little pulpier than I think the classic Blades in the Dark experience provides but again, the system accommodated that well. Our rules mastery grew during play (and never quite got to 100%) but every rule we engaged with served the fiction well. We ended up getting thrown for some shocking loops, meeting memorable characters, and making big waves in the city.

Has anyone else tried out a concept that they thought would be challenging but it turned out to be awesome?

Thanks for this. I’m starting a game next Friday and this is a good reminder of the variety possible within the Crew framework. Sounds like a great campaign, I’m imagining a Marxist reading of The Fast & The Furious, with boats!

The waterways of Doskvol aren’t something I’ve really engaged with in the setting yet, but I can see the possibilities.

If I have one regret about the campaign it’s that the Gondoliers almost didn’t show up at all. I love that faction and they would have been a natural fit but we already had the Dockers, Ministry of Preservation, Leviathan Hunters, Grinders, and Bluecoats… I just couldn’t juggle any more!