Riot in the Stars - Developing a BitD/Ironsworm Mashup in Space

So, a little while ago I played around with the idea of a single-player game powered by FitD rules about an alien resistance group fighting against human occupiers. I scraped that idea because I wasn’t comfortable telling that kind of a story, but I’ve resurrected the game as a sandboxy science fiction mash up of BitD and Irownsworn, one of my favourite solo RPG systems.

I just finished a prototype of this new version of Riot in the Stars, available now for $1 on my Patreon.

100 years ago the first fleet of the Sol Federation arrived in the Centauri Sector. Humanity stepped from these ships onto 9 promising new worlds, and one by one claimed them as their own. When the Centauri protested the Federation’s occupation of their worlds, humanity’s response was swift and forceful.

Now the Centauri resistance wages guerilla warfare against their human oppressors. The Sol Federation reaches hungrily for new worlds to colonize, and the Star Speakers portend that soon there will be a riot in the stars.

My goal with this game is to marry two of my favourite systems, use what I love in both, shed what I don’t like, and create a system that allows players to effortlessly tell a unique and compelling science fiction story. I have a lot of love for solo TTRPGs, and I’ve already made a few small ones myself. The Riot in the Stars prototype is already 40 pages so this is going to be a much more substantial undertaking.

Anyway, this thread will be used for updates, feedback, and talking through the design process. Now that I have a prototype I’m going to start testing the game using the Roll20 character sheets. If you end up playing or reading through the prototype please let me know!

Woof. Well, finished a first solo playthrough and I have a huge list of changes.

Surprise surprise, I’m trying to do too much. I wanted the game to have this sort of esoteric, occult, almost Disco Elysium vibe and that’s a lot to cover in a game where I’m already trying to mash up two systems.

So I’m cutting the magic. Actions like The Firmament and Incantate sound great but there’s another game that I can put those. Right now I want to focus on solo science fiction adventure. I’ll refocus the actions.

Action specific consequences work well, but I could do more. Right now each action works like a move in other Apocalypse World games like Iron sworn. You roll your die pool, if you get a 6 you do what you want, on a 4/5 you do what you want but you also choose from a predetermined list of consequences, and on a 1-3 you choose more consequences/get worse ones, succeed at great cost. Here’s an early version of the Entropy action: 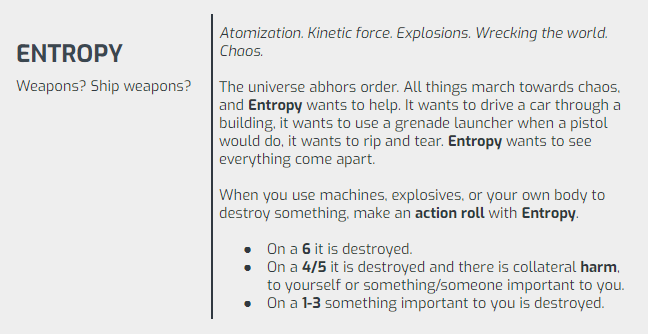 This mirrors how things work in PbtA games, but with a larger pool of stats you can create more diverse characters and tell different sorts of stories. Also it allows for resisting consequences like in BitD, which I sorely missed in Ironsworn. Also I can have each action colour the narrative with different consequences and suggestions about what to write about when you use them.

No more aliens. I do want this game to be about human colonization but again, I’m out of my depth here and I don’t want to tell stories I have no experience with. There’s room still I think for themes like how humans measure sentience/sapience and who/what gets to determine personhood but that still feels like I’m trying to do too much. I can tell that sort of story with colonists/the federation and the growing separation of spacers and people who live on planets.

Maybe make the science fiction feel harder? When reflecting on what I liked about my first playthrough and designing the prototype, I kept coming back to stuff like The Expanse. I want space to feel deadly, I want the journeys to feel long. I want to talk about how getting to the stars doesn’t solve human problems, but exacerbates them, and creates new ones. I want rail guns and torpedoes, not ontological weapons and star witches. Although star witches are cool…

Anyways, that’s what I have so far. Going back to the drawing board. Going to redefine my actions (make them all verbs, verbs sounds much better when you reach for them during play), give them each a bit more weight. Collapse plots/jobs into one thing, much like how it is in Ironsworn. Both systems use clocks, but I prefer how Blades uses them. Feels more straightforward, and I never liked having to do progress moves.

Alright. Had another test session the other day and I’m feeling great about how the game is shaping up. A few big notes from this last session.

Actions should be verbs. My first list of actions was all style and little substance. They sounded cool but they were hard to translate in play. Action verbs have this great effect of contextualizing what your character is doing in the moment, and that is much more important than a dramatic flair.

For context, here is my first list of actions:

Woof. Those sure sound cool but this sounds like some sort of occult adventure with star witches and space behemoths and living star ships. A cool game to be sure, but not the game I’m trying to make right now.

Now that’s more like it! This isn’t set in stone yet, but wow was this a lot easier to navigate in context. You’ll notice that this list is very similar to classic BitD and S&V. After spending quite a lot of time in online thesauruses I’ve come to the conclusion that there’s no reason to reinvent the wheel here. these are appropriately evocative verbs, and they are specific in ways that help with this mashup system where each action works like a PbtA move.

When you test the game, you are also testing the fiction. My last session started with a new character, a bounty hunter who has lived her whole life in space, hunting her quarry. Her plan was to use one of her contacts, a shuttle pilot, to assist in capturing the target after she used her pistols to explosively depressurize the part of the station where her bounty was located. She put on her space suit, got into position, aimed with her pistol and I realized wait, can this gun fire in space? Shit. I have lots of opportunities to inject some science fiction tech to solve these and other problems.

Let magnitude/tier inform the fiction. Spaceships are way to easy to acquire, as are many other dangerous or elaborate pieces of technology. The acquire asset downtime action exists in Riot in the Stars, but since the character has no crew the roll is based on the tier of the location where your character is located. Escalating the tier/quality level of items will be easy enough if I stay true to the magnitude scale. This makes things more expensive but that’s good. A space ship is a huge reward and it should take a while to acquire one.

I have lots of notes for changes and things to add. I’ve also been brainstorming general setting details (number of star systems, planets, space stations, etc.) so I have plenty to do for the near future. My goal right now is to have an early beta version that I can make available on my itch store in March. That version should have enough game and setting for someone to play through their own solo campaign.

So as I was struggling to convert things like position and effect into moves and action rolls, and wrangling dozens of locations and factions, there was a voice in my head. A voice that kept saying,

So I screwed around and made a dungeon crawling prototype instead. It’s called A Torch in the Dark and it was actually a good exercise. It’s influenced by video games like The Darkest Dungeon, Slay the Spire, and Diablo.

Riot has a lot of individual moving parts and I was having trouble wrapping my head around it. Then it was like part of my brain knew to focus on the small stuff. Focus on what each action does. Focus on things like load and harm. Focus on XP. And exploring those ideas in a much smaller, compact game helped me wrap my head around what actions need to do in a solo game, what the play experience would be like, how the mechanics all work together.

Here’s what the Skirmish move looks like right now in Riot in the Stars:

And here’s what the Skirmish action looks like right now in A Torch in the Dark:

As you can see in Torch your effects and consequences as a character are much more clear cut. You have hit points and so do your foes. Something that Iron Sworn does very well is giving you resources to manage rather than getting the player to adjudicate situational complications. The latter is great in a fiction-forward game like Blades but when you don’t have a GM you want to make it clear cut what the player does at each stage and with each mechanic. While I do want the player’s action to have a little more fictional impact in Riot, it’s better to figure out what each action asks of the player in terms of their resources.

So yeah, in my effort to make this game I ended up making A Torch in the Dark. You can find the prototype on my patreon, and if you’re interested in trying the game out then please send me a message.