My name is Ray and I write a comic with my partner called Skies of Fire. It’s mostly about airships, powered by crowdfunding… and we’ve been working on an RPG for it since 2015 when our buddy and collaborator Josephe Vandel introduced us to Blades in the Dark.

It’s been stop and go for a long time now. We’re on our fifth internal alpha, hoping to release a public test sometime in 2020. A handful of other creators have contributed work, with the biggest contribution coming from Eric Brunsell who is very active on here.

I guess since we’re really making it a priority in 2020 it would be good to start getting feedback from the community at large!

As with most people, our starting point for modding was word replacement. I wouldn’t say we’re reinventing the wheel here, but we definitely did wrestle and iterate on our choices several times. In general, a lot of rewording type skinning going along…

Probably a lot more. There were reasons and discussions for all of the changes, mostly stemming from making the transition from the dark and gritty Duskval to the a stripped down steampunk / alternative history esque setting of Skies. Thinking about reskinning momentum back to stress or something else as momentum is a relic from a mechanic in an earlier build which isn’t really relevant anymore. Games are complicated…

The notable change we made from the Blades core playbook module was adding ship roles that grant two specific special abilities and narrative background. They’re listed alongside attribute requirements but on recent playtests we think this makes the system too crunchy with the UI to back it up and are going to revert it back to just picking one at the start.

For our latest internal playthrough I picked Fatalist for Solomon Craemyr, Globetrotter Extraordinaire. He’s a pompous little shit who believes the manifest of his own destiny makes him invincible. He’s got a rather droll sense of fate, which is how I interpret the Fatalist special ability: “once per session you tell a character their act was helpless, allowing them to reroll.”

One of the biggest ongoing discussions is how to handle ship encounters & combat. Right adjacent to that is the discussion of whether or not to have a set captain, and if so, whether to give them any special rules.

So any type of ship adventure always has a captain, right? But do we reflect that in the gameplay? Is it a role? Do we rotate? Is it fun to do so? How does that tie into the mechanics of the ship as a whole?

While we’re on the subject, how are we handling the ship? Hit points? Attributes? Separate ship combat rules? An airship needs a lot of crew to get it working. How do you represent that while still abstracting in a fun, narrative first way?

Here’s what we’re currently running with:

Ship Encounters happen the moment the players are aware of a threat to their ship.

The captain orders the ship, but the crew executes the orders. In gameplay terms, that means the captain is very rarely rolling actions during ship encounters. Instead, she determines who on the ship acts. If no player characters can execute the order, the action goes to the next logical crewmember, whether that is another player’s Flight Officer or just another Secondary Player Character.

So for instance, if the captain orders evasive maneuvers, the helmsman roll an action to see if he is successful in carrying out the order.

When a consequence occurs, the GM determines if, where, and when it happens on the ship. In this way the GM can move the scene back and forth to different areas and characters to deal with different consequences like a fire, loss of power, pressure, weapon jam, smoke, ramming, boarding, etc.

The GM can also defer back to the captain for the next order, usually once a consequence has successively been dealt with. Using Clocks helps greatly when managing these encounters.

Consequences don’t always have to be ship-focused. For instance, the lost time from a slow maneuver might allow the enemy ship to come within ramming range, or a GM can always just give damage to a ship.

Players can also seize momentum in defiance of their captain to act out of turn at a cost of two of the ship’s Morale. This immediately shifts the scene to the player and their action.

A lot of that is just remixing or restating what is already in the core Blade mechanics but with a little clarification. So far it’s worked better than anything else we’ve come up with. It’s also made us realize what really matters when it comes to the ship:

1.) The Setting/Backdrop. Gotta fix the engines of the Heliocarrier, going down to man the turrets of the Millennium Falcon, manually shutting off all nonvital systems so the Nebuchadnezzar doesn’t fry with everything else, etc. The various locations of a ship are important backdrops …

2.) The People. It’s not really about how fast or how many guns, but about who is in it. Their struggles and triumphs. Anything that is done on the ship should be done by important characters. And if they weren’t important characters, giving them a scene makes them important.

Right now we’re focused on how awesome the concept of Cohorts are - you can play more than one character! - and how we can better use them to drive the narrative through the Ship Module.

I know a lot of other FitD have taken the cohort idea and run with it as well. I just bought BoB and am going to read through it soon. Would love to hear any thoughts anybody else has as well!

It is great to see an active playtest for this. I had a blast playtesting the previous version with my group. Each character being in charge of a flight (cohort) also added great roleplaying opportunities, especially with the addition of crew entanglements. We ended up with a faction of the crew grumbling about mutiny, another that was a suck-up to the Captain…and wrongly accused some of his enemies.

The setting is incredibly well defined (check out the comic linked above). At one point, the characters got caught in a shoot out in an embassy, leading to an international incident. We had quite a few airship battles and boarding actions, which - on more than one occasion - left a character dangling from a strut or engine mount, with the player staring at a desperate roll to avoid a long fall.

The setting is perfect for a wide range of campaign styles - from military, to smugglers, to Indiana Jones - all on airships!

Skies of Fire is a world where airships are the dominant means of transportation, commerce, and war. A mighty empire, Aquila, exerts its influence on the rest of the continent, but not without consequence. A recent civil war has led to the secession of several Free States, and given rise to rampant piracy throughout the lands. 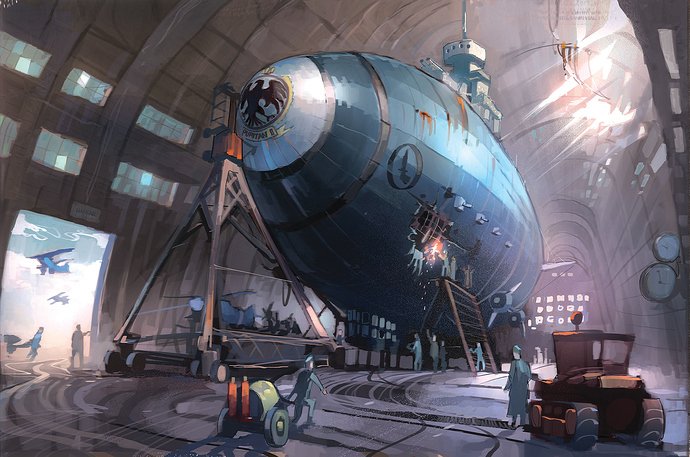 The Kajaars of the Malfearn Desert act as unofficial intermediaries between the Aquilans and the Free States, selling goods acquired by questionable means to those who have enough coin. Meanwhile in the north, the slumbering bear nation of Asantes continues its hundred year policy of isolationism. And in the far east, the ancient Garabat nation is undergoing a so-called Restoration, rumors brought by the winds speak more of a purge… 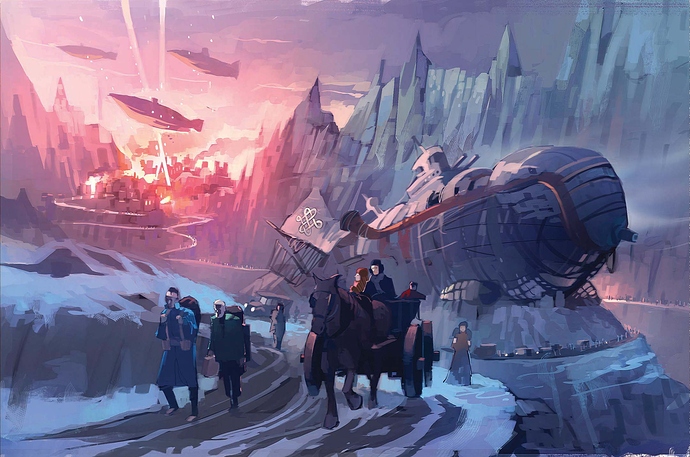 We’ll find out if our airship crew can succeed among the rivalries of fellow crews, the ever-more oppressive Aquilan navy, recently seceded Free States, and wealthy Kajaars that run the gray market between the two. Along the way we follow the individual story of each crewmember, exploring their motivations, flaws, and triumphs. 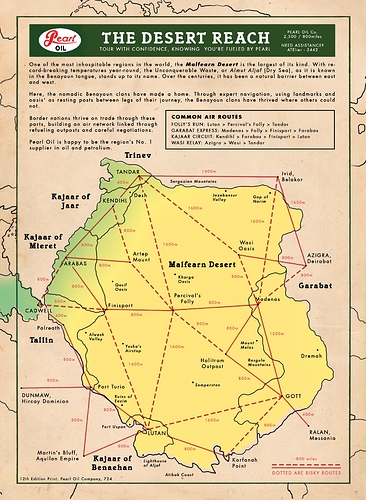 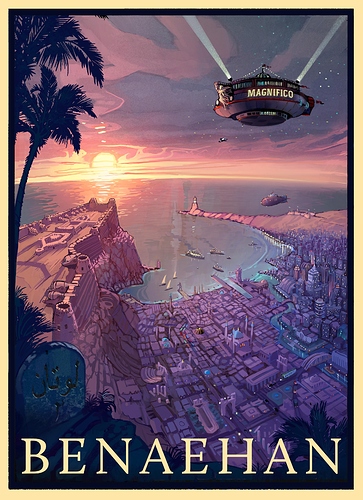 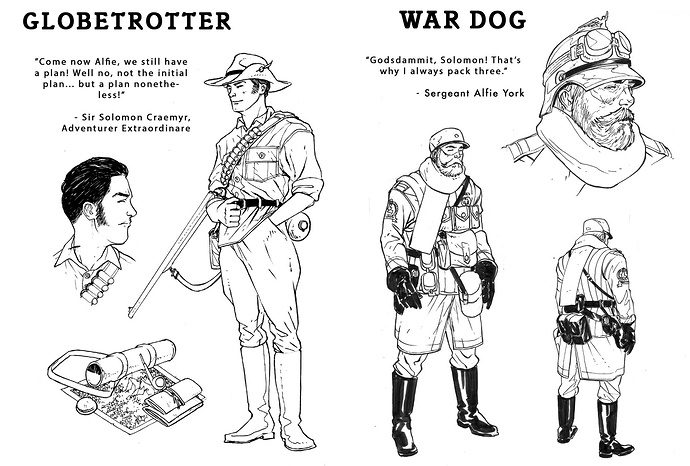 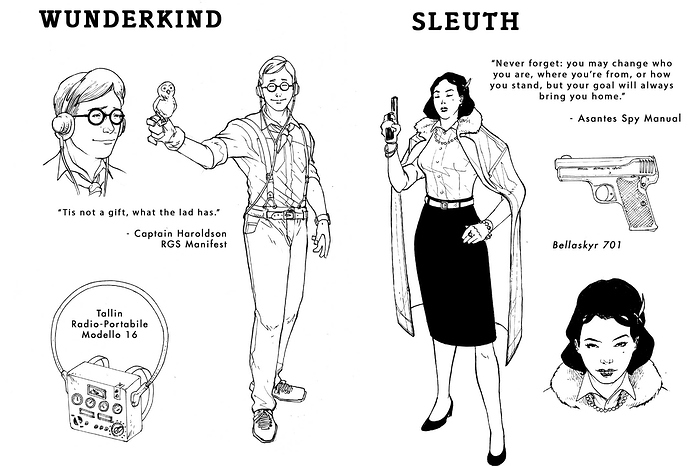 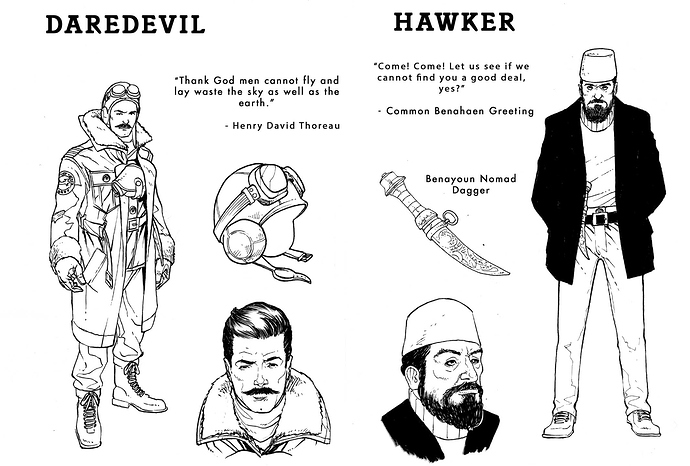 We also have the Tinker, but we don’t have an illustration for her yet. 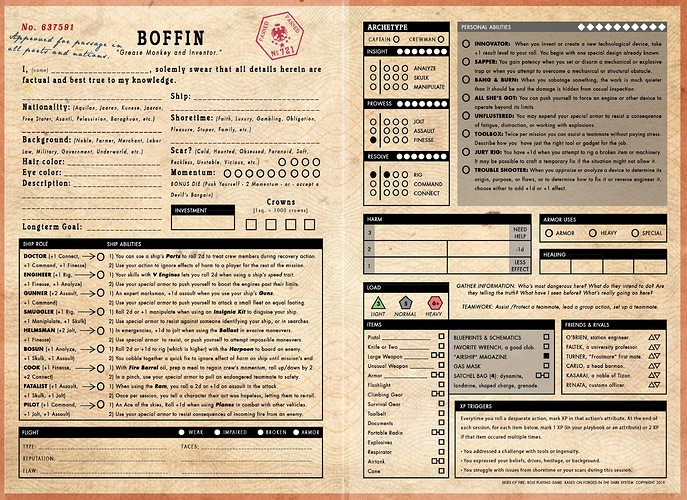 We’d like to add one more playbook to make it an even eight.

Any suggestions would be greatly appreciated!

wow, I’m a fan o Skies of Fire since the first issue, this I’ll definitely try with my online group as a one-shot

Skies of Fire is great for campaigns too. Our play test was a blast. The setting is really rich, and…airships.

The document is fairly messy right now with a lot of redundancies, but it’s in more or less a playable state. We’re explicitly not trying to wow with the design aspects right now… just trying to test and iterate to figure more out.

Mind the spelling and grammar mistakes.

There’s other stuff I’m probably missing but that’s the gist of it! The main “aha!” moment for us was codifying where and when the camera should move in order to get everyone on the ship - not just the captain - involved in the action.

And that about sums up what we’ve been working on for Skies! Up next is a push for a Quickstart which will hopefully have a contained setting and campaign for players to test. This one is getting the attention to detail art pass that will hopefully make people ooo and ahhh.

Still a lot to do, but we’re getting there!