Wanted to share my groups progress at Skydagger Keep so far.

The Legion put their very friendly Panyar medic on fixing up the keep with a group of recruits who has not seen any action so far in the campaign and deeply dislikes him. But they are making good progress. 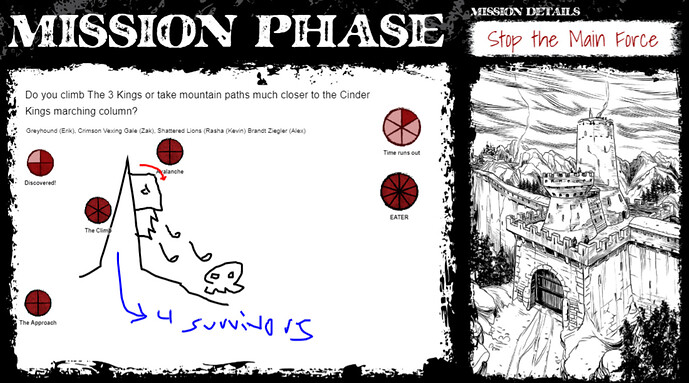 We had a fantastic Stop the Main Force mission with two Scouts leading rookies into the mountains while being chased by Eater. Probably most climatic ending as one rookie keeps Eaters attention on the cliffs edge while the rest of the players tries to put enough musket shot in the air to ignite the fuse which they failed earlier to conceal from Eater. One of the players got the choice when he was caught in the resulting avalance to survive by gripping a rope but Eater would also survive. He choice to sacrifice himself to save the squad and he and Eater died in the avalanche (Eater had 0 ticks of damage and would have probably finished of the at least the rookies). Very action movie like. 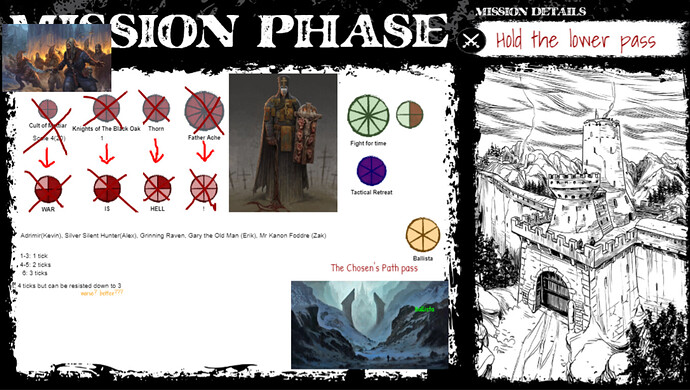 Also had an interesting Hold the Lower Pass mission. The Legionnaires ended up killing all opposition in the pass with Fire Oil (holy shit it gives Scale 3!) and a ballista. 4 people died so it was a pyrhic victory though.

We are currently halfway through Assemble the Siege Weapons missiomn and will share some screenshots after that mission. Going into horror territory with this one.

It’s interesting to see how folks are using the roll20 module. The war is hell clocks got a good chuckle out of me.

That Eater story is boss!

Yeah, the situation with Eater is why rolepaying is so awesome. Action packed situations with meaningful choices and consequences just springs up out of nowhere.

Essentially each unit in the scenario had a War is Hell clock they would roll for when the players had taken some actions and time went by. Various Harm and nasty consequences would then spring up when a War Is Hell clock filled, sort of playing on attrition element of a battle larger than a skirmish. Then the clock would be unticked and could be rolled again. The players managed to limit their risk pretty well but in the end 4 Legionnaires dies.

Playing the final mission for Skydagger Keep tonight, and here is our starting point: 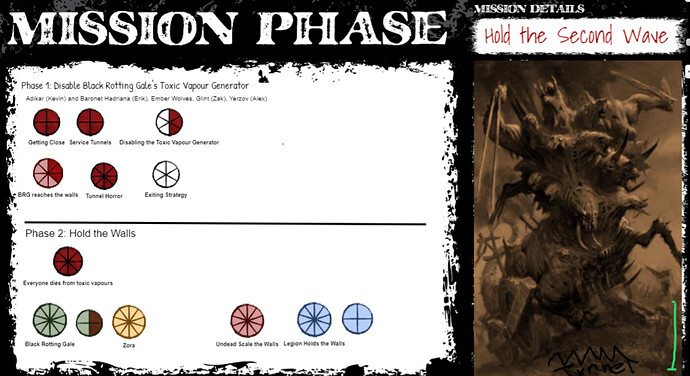