Stick a Fork In It

The Legion had exactly 5 Squads and 5 Specialists and the players were sure they were screwed, but I honestly don’t think they realized how much of the system they had picked up over the last few months leading up to this.

Super smart use of Group Actions, Resistance Rolls, and no fewer than TWO of the Missions starting form a Controlled position combined with an astonishing run of good fortune (24 (TWENTY FOUR) total checks with a 6 across the entire evening) meant they lost NO ONE and managed to take General Mihkin’s shield arm off with a well-placed Crimson Seeker shell so that Zora could take his head off.

And then they CRITTED THE FINAL BATTLE on 3 dice! It was totally epic.

Here’s the roster of the remaining cast, including the fallen Specialists and Big Bads: 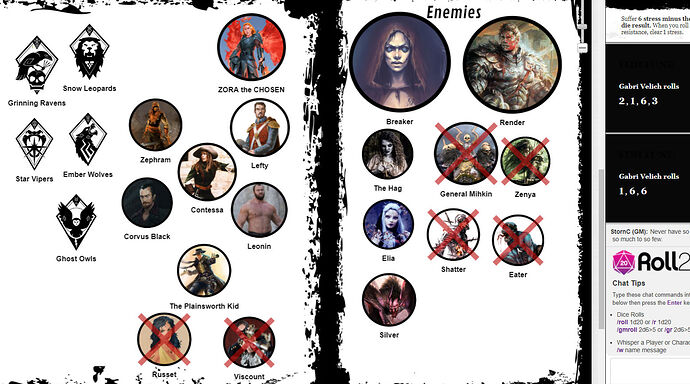 Oh, and The Plainsworth Kid was a bandit leader who has foiled them at every turn (on THREE separate Secondary missions!) who they finally convinced he couldn’t run any further, and got him to join them for the very last battle!

I love the ongoing fiction that this game generates when you take some time to tie the missions to the ongoing story. Thanks, everyone, especially Stras, for answering my questions and encouraging me to go all the way.

Amazing. Thanks for sharing this (is it ok if I tweet about it?)

The Legion had exactly 5 Squads and 5 Specialists and the players were sure they were screwed, but I honestly don’t think they realized how much of the system they had picked up over the last few months leading up to this.

This is awesome to read. I specifically remember a convo I had with John when we started designing this. I had previously asked him what an acceptable campaign loss ratio was and worked the math backwards from there. And at one point he asked me about the impact of player/blades skill on the campaign and I remember looking up and saying “By the end of the game they’ll either have lost or figured it out.” (this btw is why we have a few rules for campaign kickouts earlier, to make sure a doomed campaign doesn’t drag on too too long)

We literally did everything we could to make sure the game was clear about it’s feedback loop, so that by the end the players will be like the legion. Exhausted. Fierce. Ready for that final fight. Pulling out all the stops.

It’s super rewarding to read that it’s “working as intended”. Thanks so much for writing this up. Also love those tokens.