I am preparing for the first game. We will have a crew setup, after which I would like to run a simple score to teach players the rules and give them a taste of how the game runs.

I understand that I should not prepare scores, but instead situations. I really like that - I don’t want to design what the crew will do, but rather the problem. What I struggle with is that I am used to preparing exploration heavy adventure sites. For example, a village would have factions, characters and problems to explore and then act upon by the party however they like. Ancient ruins would have dangers, curiosities and reward to claim. I find it hard to do the same thing with a score, which seems very goal oriented.

Because the score are a criminal activity, I expect it to be opposite of exploration - there is no incentive to look around and meet people, instead they will be focused on just getting it done. As such, I am not sure what to prepare in the score location to provide the gaming material. I wonder if someone has some advice how they prepared the situation - what exactly did you have prepare in advance? Maybe you have some rough notes that you could share for an example?

I’ve used the starting situation proposed in the book with a little twist.
Roric is the Crow’s leader. Lyssa wants him dead to take his place - problem is Roric has a ghost-bodyguard who can protect him from bullets. She hires an assassin known as Harpooner - his aracane skills can allow him to disintegrate ghost and kill Roric. Harpooner knows that she might try to double cross him - so he hires a bunch of “fresh” crews to secure a couple of his evacuation routes and escort him if needed- one of them would be our crew.

This gives players a lot of flexibility as only the starting point (Crow’s nest) is set - eventually you can assume that crew’s hideout will be the end point. The route itself? Up to players. Preparations on the way? Flashbacks. Translate engangement roll to fiction? How close are Crows to catching Harpooner when he meets the crew.

I had a list of potential problems at hand to use depending on player’s actions:

And then just let if flow…

I can’t share my notes because they are in portuguese (they are also a mess, wouldn’t recommend reading them) but in my experience what you want to do is create a framework for your score. A bang, basically the way your score will start. A location, where is it happening. A situation, why does this score exists and what event made it possible. And finally extras, which are every other element involved like obstacles, NPC’s, clocks and devil’s bargains you can thow at your PC’s. To appease my anxiety I try to write at least 3 for each (Bang, Location, Situation and Extras) 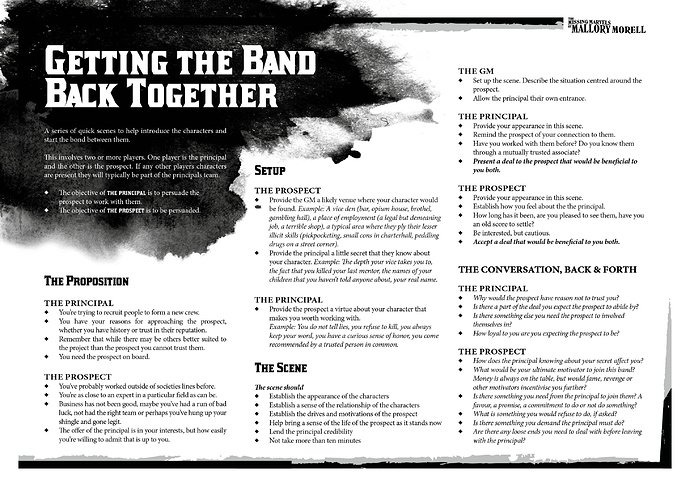 To cut to the first score where the crew get their hideout from a enemy faction, all completly improvised.

So when I run a first session of Blades (especially for new players), I like to make sure I cover a few things:

You’ll find that prepping a Score is really no different than Prepping for an “Exploration Adventure.” I’ll want a rough idea of the location, the possible people, and what the general point of Job could be.

So maybe my premise may be as follows:

From here, I’ll use elements of Crew and Character Creation to figure out:

I’ll probably be making note of PC Friends, Contacts, Rivals, and maybe a notable or two from a friendly and a non-friendly faction (and may ask the PCs to give me some Traits or use a character trait generator if I feel it is pertinent or helpful) as well. That should give me enough people I could readily toss in. Worst case scenario, I just keep a list of names that I can pull out of thin air and drop someone in if something isn’t covered.

From there, I’ll want to know the basic approach (not necessarily a Plan/ Detail, but it wouldn’t hurt). That’ll let me shape the starting situation of the premise. We’ll say they opted for Assassins and the Crew is really big into kidnappings and ransoms. The immediate thought that comes to my mind is for whoever asked for the guns explained that Bethany’s weakness is her mother. Kidnap and random Beatrice for the guns. Beatrice is an expert “Pramacht” Player (basically a chess-like game) and there 'just happens" to be a local tournament being held in the Crew’s Hunting Grounds. They’ll be able to get here- but when the Scene opens, it’ll open with an attempt on Beatrice’s life. She’s still alive and hiding behind cover with the folks she’s making a deal with during the tournament’s post game celebration. She’s alive, but the Crew will have to act quick if they want to keep their ransom alive!

At this point, now would be a good time to call for a break. This will be the time where I think about potential problems:

Armed with all of this “potential fiction,” I’ll now have some quick reference material to help me out during the game. I may end up using none of it! The starting scenario (Beatrice is attacked during post game celebrations while she’s trying to make a deal with some potential buyers) might spiral in completely different directions than I prepped. In that case, I just need to roll with it and maybe disclaim some decision making by polling my players for some ideas. That is why it is important to never “marry” your prep and just let things go where they need to go.

I generally don’t fret about locations and whatnot as part of my prep. I just know that, in the case of this place, it is probably like an open floor plan gala/ celebration room in like a Museum or Social Gathering Hall somewhere or something like that. I mentioned Skylights and Sewers and nearby buildings- so that’ll be good to know as well. Otherwise? I’ll leave the rest nice and open to allow me to add things on the fly (especially if they’d be convenient features for the players to do their cool stuff).

Hopefully that all makes sense and hope that helps.

Thanks you all for amazing answers! @Sully5443 Thanks a lot for the enormous effort of writing the answer - this looks like a ready made material for me, I will definitely take advantage of it!

Is that sufficient number of obstacles to have? Do I need more or will the partial successes provide more (and will these be more than just attracting attention)? How many obstacles would you have during the score?

Ultimately that is up to you. I don’t think there is an “optimal amount of prep” or “the best number of potential fiction to keep in your back pocket.”

The example I provided above is way more prep than I usually do. I typically just have a couple of Job ideas, which is just composed of:

These come mostly from a mix of prior sessions, Faction Clocks, etc. The Players can follow up on these leads I posit to them or something else and I’ll workshop with them from there. As the GM, I’m not the principal story teller- that is on everyone’s shoulders.

The one thing I’m most concerned about having is how things might kick off and I’m normally formulating loose ideas when:

Generally Speaking (so YMMV), the starting sequence is more than enough for me to snowball “what happens next.” It just becomes “what logical problems would come from this dice roll?” or “what new problems could be cropping up that would stand in their way?” Sometimes it’s a bunch of things and sometimes it’s just a few- not every score will be a full session of Action Packed Tomfoolery. Sometimes the more exciting stuff is the aftermath from a quick and dirty Score.

So if I were in your shoes and the premise was “Steal Drugs from Leviathan Ship” my brain would probably go to the following places first:

Once I have those answers, I’m a pretty happy camper and I won’t really write down much more than that and I’ll let the Crew’s antics help me learn about more stuff.

If this was the first Job of the First Session, then I’d probably start them off in a Risky Position where they arrive just as a Ministry of Preservation Boat blockades the Hunter Vessel in the Dock, and around a half dozen Ministry Carriages arrive as they prepare to inspect the ship due to rumors of contraband.

At this point, I may have already had some ideas flittering through my head. There may be:

As I said in the original comment: one, some, all, or none of those things may make it into the Score (or maybe they’ll appear in different ways!). It all depends on how they deal with that starting situation.

So I guess the Tl;dr here is:

Hope that makes sense and hope that helps

@Sully5443 Thanks a lot! I think I get the part about thinking through the context of the game and using that information to flesh out the score’s details! That’s one of the things I am really excited about the game, as the story propels itself.

What I am specifically struggling with, are the technical aspects of the obstacles during the score. For example, throwing in the inspectors looking for contraband - that’s a new obstacle that is completely separate from the main context. I am trying to figure out what are the things I need to know in advance, so that I am not stuck with “Uhhh… You are on the ship and you get the drugs”, because I don’t know what obstacle to throw in at the players.

Maybe another example of play will help: https://bitd.gplusarchive.online/2015/12/08/im-running-an-online-game-of-blades-in-the-dark-using-the-quick-start-rules-with-three-players-though-often-only/

Most of this is me riffing off the players ideas and winging it. You have to be light on your feet because players will use flashbacks and all kinds of surprising approaches that you can’t really plan for. All you can do is commit to the fiction, building detail upon detail, and fall back on interpreting that fiction when you need to engage the mechanics.

Thank you, @watergoesred! I will read through!