I’ve created a PARAGON playset called SURGE PROTECTORS. It is an homage to Saturday morning cartoons about transforming robots and now, as of patch 1.2 it’s also about rock bands with holographic technology.

It’s a barebones playset that replaces divine favor with components like photonic carbines and nexus drones.

There are two bits of new tech though (albeit pretty small changes). The sacrifice phase is replaced by Uplink where you send any captured WIRE EMPIRE codes back to the Seer, your leader in the MetalWarp dimension. Because the gods don’t really resist sacrifices, they don’t include the Strife Level in AGON, but in SURGE PROTECTORS the WIRE EMPIRE is trying to intercept those codes, and they gain an intercept die if you suffer during the contest.

Also, I made a slightly different format for Islands with a basic premise and a list of possible trials. It is the kind of short form I would use when making notes before a game and might be useful when making islands/incursions of your own.

It is 1984 and the Earth is under attack from a silent invader.

EMPERIONS, mechanoids from the MetalWarp dimension, use their Gravimetric Beacons to launch INCURSIONS into our reality. Emulating our technology they hide among us, slowly siphoning Earth’s natural resources to fuel their conquest of MetalWarp and fulfill an ancient prophecy of destruction, THE SURGE.

Humanity as we know it would perish if not for their own champions—rogue Metalwarp defenders who have pledged to protect the earth from INCURSIONS by their own kin—the SURGE PROTECTORS! 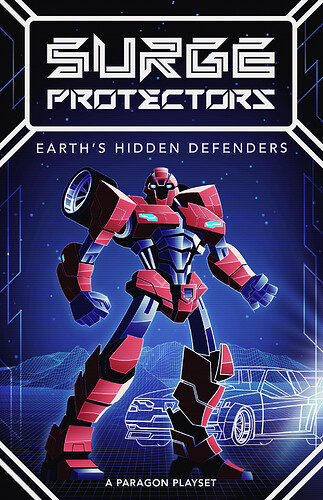 SURGE PROTECTORS is a shapeshifting robot defenders playset for the PARAGON system from the AGON roleplaying game. A copy of AGON is required to play. For more on the PARAGON system, including how to publish your own playsets, visit AGON-RPG.com.

Really fun playset! How should a player usually invoke their “Vehicle Form”? An interesting thing about epithets and their playset analogs is that they are more powerful when they are more general. Do players need to narratively justify using their vehicle form dice in order to do so?

I think, even more so than AGON, the players should be able to call on their Vehicle Die just by describing an aspect of the vehicle (spinning wheels, using the lift of a forklift, honking a horn, swinging open a door) or disguise themselves as a vehicle, or describing some cool action they do as they transform back and forth.

This is the sort of thing that I’m thinking of:

I will try it next week with my friends!

That’s a hell of a patch.

I’ve got another incursions in mind (also about the Photons) and thoughts about other leaders in MetalWarp (like the Seer) that the SURGE PROTECTORS can pledge themselves to and gain bonds from (like Demigods in AGON).

What’s the right policy? Should I add the logo on my character sheet playset or only in the rules book?

Thanks for checking. It’s optional.

As per guideline #3: “You may include the PARAGON system logo mark on your document.”

Oh thanx - I remembered wrong (you must). I will add for sure in the rules book, but in the character sheet I’m not sure I will have the right space.

This playset is great. My best friend collects Transformers and will LOVE this. I might even get him to play AGON.

Thanks for the kind words Dennis. I hope you get a chance to play!

Patch 1.2 is out, now including INCURSIONS: UNLOCKED.

This 4 page add on (included with the download) has three new incursions that unlock new options for the SURGE PROTECTORS:

Find all the deets and downlead version 1.2 here: seannittner.itch.io/surge-protectors/devlog/209167/patch-12