THE EXILES — Dark fantasy pointcrawl, forged in the dark 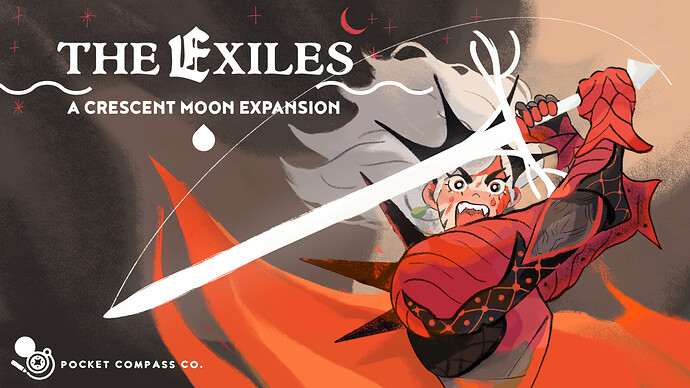 Hey everyone! I just launched a campaign to fund a physical edition of THE EXILES, a dark fantasy expansion for Crescent Moon I’ve been working on.

Crescent Moon is a FiTD game I published last year about brave children traversing a whimsical dreamscape. It makes for tender, non-violent stories with fairy tale vibes. This year I decided to expand on it by doing an expansion where you instead play a band of outcasts banished from the human world and forced to journey through a grim hellscape. So yeah, big tonal shift!

If you dig stuff like Band of Blades or As The Sun Forever Sets, this might be up your alley. It streamlines a lot of Blades’ rules in favour of simplified procedures and heightened emotions, but the core idea of playing a bunch of struggling misfits is pretty much there. I also just published a free playkit on itch in case you’d like to check out the core rules.

If you’ve got any questions or things you’d like to discuss about the game, hit me up!

I really liked your work on Crescent Moon (my copy is sitting on my dining room table)!

I’m curious how you’d “expand” that to do point crawl and hellscapes. Because I like those things too! And Band of Blades which you listed above as you can imagine (haha) ^_~

Anyway, backed before I even came to this post. Really looking forward to it. The promo art there looks RAD!

Awh thanks Stras! To be honest it came quite naturally once I found the right framing. A lot of CM already has spooky undertones, so it was a matter of engaging those aspects more seriously and soon enough the new mechanics followed suit. The way the pointcrawl stuff is weaved into the play cycle is actually almost identical to how CM plays, too—the way I see it, the pieces that make up the game are almost the same, they are just rearranged and recontextualized in a manner that creates a new reading.

I think you’ll dig it! If you ever check it out, I’d love to know what you think.

Well this prompted me to go look more carefully at the KS and I found the “download the preview” link so I will check it out soon!

I’m in. Hoping for the best, good work!