As is the often the case in Blades, there’s ample “blank space” to fill in for the Spirit Wardens. We know they’re anonymous, and recruited from outside Doskvol. They have considerable occult and sparkcraft resources, and are integral to keeping the city’s ghosts at-bay (that is, if you believe the Imperial propaganda).

In my games, the Wardens are effectively ghost-busting MI6 agents, right down to their numbered designations (Warden #99, Warden #98, all the way up to Warden the First). A single Warden can match supernatural threats toe-to-toe, and is capable of fending off several mundane opponents at once if the situation calls for it.

What are your Spirit Wardens like? Beleaguered ghost cops walking a strange beat? Hulls gifted with an unusual level of self-determination? Scientist-poets who treat the “public service” angle of the job as an unwelcome, yet necessary, evil?

Our spirit wardens are more like cultist-wizards. Visually somewhere between the death-eater concept art and the Cult of the Red King in Baltimore: 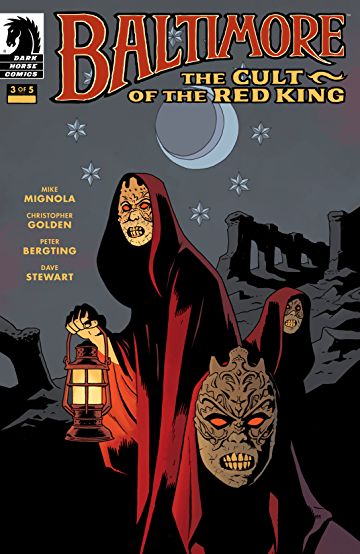 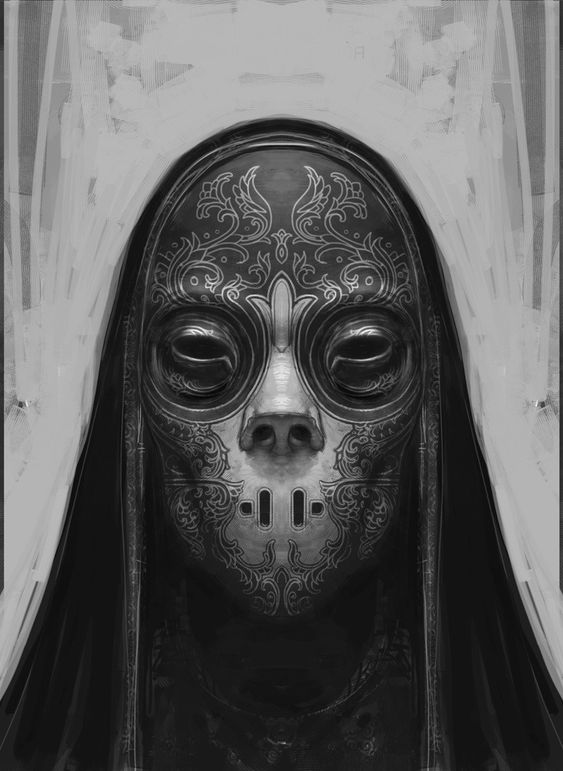 Creepy bronze masks, mostly long black hooded robes (red robes for higher-ranked spirit wardens, and the occasional green or purpled robes for special elite individuals). So far they’ve all been very powerful whispers - fighting one is basically like fighting a wizard. They don’t talk much, and they’re fanatically dedicated to their cause.

Something we haven’t seen on screen but that I imagine existing are low-level spirit warden thugs, who have iron masks, armour and cudgels. Competent muscle, expert at fighting the supernatural, but not occultists. 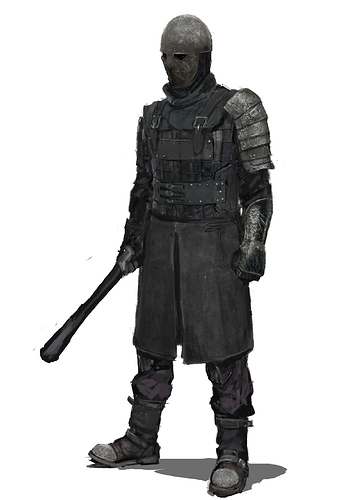 That last image is perfect–who/what is it from?

My last campaign didn’t do much with them, but our spirit wardens were like a Spanish inquisition made of terminators, single minded, uncorruptable true believers, but unbothered by the laws of man. They had fairly standard Victorian cop uniforms, but their masks were these giant bronze Hellboy-2-Angel-of-Death-style affairs which distorted the speaker’s voice like they were a phonograph recording. Aiding the spirit wardens were these massive dogs, halfway between a pit bull and a wolf hound, standing 6 foot at the shoulder, specially trained to sniff out ghosts. One of our scores was to deal with our lair’s ghost infestation before the spirit wardens inevitably bust down the door. 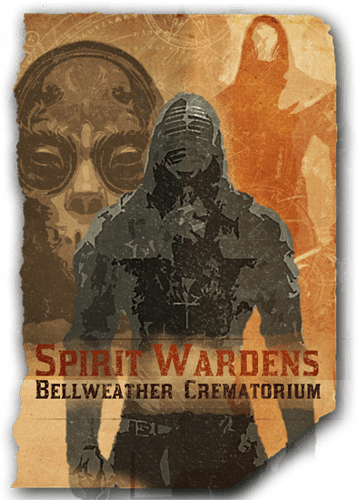 BitD_NPC_Spirit_Wardens394×550 446 KB
As you can see I used the same cool deatheater masks for my Spirit Wardens. I tried to establish them as the occult bogeymen/-persons but to be honest they didn’t play a big part in my campains (yet). One thing is for sure: they and the deathseeker crows are different factions and they don’t see eye to eye.
14 Likes
Fragnarok April 14, 2019, 2:02am #7

Our Crew had the NPC Exeter as a regular in our free-play time. We started to be on friendly terms with the Spirit Wardens, but the Unseen also infiltrated them part way. We eventually broken into the crematorium.

Our Wardens were police force/FBI style. You could see them patrolling on foot, in squad carriages, or dozens of them investigating crime scenes; others have desk jobs, conduct research in sparkcraft labs, or are liaisons to the magistrate office.

Their masks and gear were also practical, allowing them to quickly pack up their electroplasmic tools, switch to civilian clothes, and comfortably eat, drink and smoke without revealing their faces. The high ranking Wardens also had formal uniforms they could wear to social events.

Wow, I love your illustration @monkeyEcho!
Have you done others ? Do you have an online gallery somewhere, where to find more ?

In our Smuggler game they usually showed up as occult cops with Bluecoat retinues, as a threat when crossing bridges and such.

I commissioned a pic of them from Qsy, who had pretty free reign to design them: 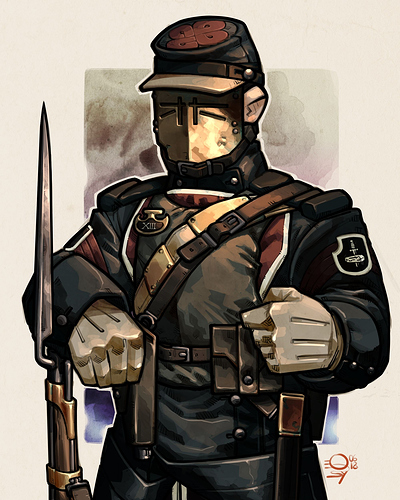 The Wardens have lingered in the background a bit during the game I’ve been running lately, but they’ve made a couple of fun appearances.

A couple of things I’ve discovered:

⊙ They use a whistle to communicate alarm and to coordinate pursuits. It’s low pitched, and made up of multiple tones - almost like a train whistle. It’s weird, haunting, and can be heard in the ghost field.

⊙ They use hounds, bred for loyalty and ferocity, inured to supernatural fear, and trained to hunt ghosts (and anyone else the wardens call to their attention). The dogs are ritually slain at the end of their training, and their bottled ghosts are carried by certain wardens - ready to release upon spirits or those who consort with them. The howl of their pursuit is most unsettling.

have a small online gallery at deviantart, but there you’ll find only pictures from my a Fistful of Darkness hack. That’s because I tend to use lifted pictures from pinterest for my npc cards and therefore I shy away from posting them as mine.
I post some of my stuff from time to time on twitter and I’m happy to have another follower there.

I did some NPC card templates you can find on my aFoD page at wordpress (scroll all the way down).

I am currently playing a character with Spirit Warden as her background and vice. Atm it hasn’t really come up in the fiction but she did use her Spirit Warden special weapon (emberdeath/sealed in blood crew abilities triggered here) to remove the tails on the target from the bar.

Mind you she earned her first trauma during this stunt and I want to write an rp giving a little of her mental state during this moment but wouldn’t mind some group help here.

Further backstory on Thistle is that she is a Rakshasa due to an explosion a foul and mutated ghost. The building exploded and she was the only Spirit Warden of her squad to survive all said and done. Now the cult ability of ‘Sealed in Blood’ requires human sacrifice to be made in ritual. When the GM asked how this counts I stated that all sacrificed by the Wardens supernatural or otherwise is given to the Immortal Emperor who created the Wardens as a personal extension of himself of protecting the world. I am playing into that and want to explore the Wardens as an actual good Faction.

Open to further suggestions as how this can be expressed in fiction and my char’s rp.

It is about time they get some good coverage! XD

In another game, we discovered that the wardens are doing some strange stuff with the spirits they’re supposedly destroying…

Our realizations and ongoing questions:

⊙ at least some spirit wardens are capable of releasing their spirit from their bodies. Maybe those bodies are actually hollows, and the wardens’ spirits simply use them as vessels? Are all of the wardens disembodied spirits? How long have they lived this way? Are they like the Reconciled – having found a way to avoid madness? Or is there something more devious at stake? What new light does this shine on their official duties?

⊙ the crows themselves have an intelligence and wisdom beyond that of normal animals. A clever whisper deduced that they’re actually animated by the souls of deceased humans, somehow selected from the dead collected by the wardens. Some arcane ritual is used to fuse ghost and bird, creating a creature uniquely attuned to the ghost field, able to sense and hunt the dying.

⊙ the belfry of Bellwether Crematorium is a crazed jumble of plank catwalks, suspended above the “crowcote,” which is itself a seemingly mad collection of ancient wooden beams and trusses running at angles that make no architectural sense. Amidst the oppressive sense of unnatural forces in the darkness above, one can see the bellringers: bronze hulls, slightly larger than human scale, with “faces” that match the wardens’ masks. Their bodies are dark with dried blood, some spattered from sacrifices and some more artfully applied as written glyphs of power. They are chained to the bells, ever ready to perform their duty. What souls animate them?

There’s SO MUCH good stuff in this thread!

If you haven’t checked it out yet, some more Spirit Warden stuff is in the Flame Without Shadow materials, available on the website, here:

I really like the idea of Spirit Wardens as Hollows ridden by ancient ghosts. It really gives them a reason to go into situations at 110% because all they will lose is a replacable hollow.

Aha! I forgot I had access to these will do some reading and research of them

So there is a ritual listed in the items for them called ‘Mirror and Bone’ anyone have further details on what this can be? 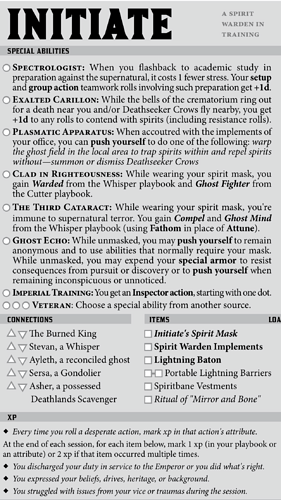 It’s on the character sheet, in the column to the left of the special abilities, under “Implements”, near the bottom of the page.