UPDATE: Adrenaline: Near Future, Forged in the Dark 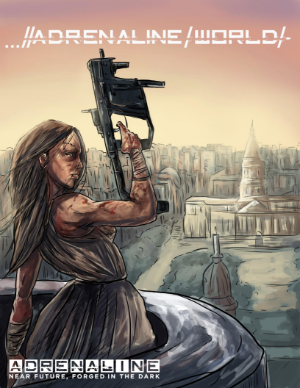 Hi all-
I’m down to the last 6 days of my Kickstarter and funded at 149% This means that I am only $3 short to fund the entire game! Including:

I am currently $503 away from the final stretch goal. Dog Days the RPG is a Forged in the Dark hack where you play cops, or robbers, as dogs. It is based on a really cool graphic novel.

Here is the Kickstarter campaign link.

I just watched that last stretch goal fall. Congratulations on the successful campaign. I’m still just trying to decide what level I can afford to back at.

Congrats! Looks like you’ve blown past all your stretch goals!

Thanks! I even blew past the ones that I didn’t think had a chance… I’m getting to work-

Hi all - The link below will take you to the rules summary for Adrenaline. It is almost finalized. It includes a spin on Heat, Operational Planning, Exfiltration, Resistance (from @CasterShell), and the addition of a “Breaking Bread” phase (communal crew experience after an operation). Warning: There are typos!
https://drive.google.com/open?id=1CnZWqlZ9bY62F2LkAS5xQV497ZuMsMCR

This next link shows how I handled transhumanism (Precogs, Proxies, and Synths). I’ll use this same format to add other heritages for urban fantasy (and my back burner heroic fantasy hack).
https://drive.google.com/open?id=19ejyIBM6JGJfWruaVBeGgBfmLOF7lwnX

The playable pre-release adds 9 playbooks & 3 crew sheets. It has been sent to backers and is available on https://ebruns.itch.io/adrenaline. I am still on target for the release of the core book in December.

I mentioned in a few other threads that I was experimenting with some ideas for session 0 for a new play test campaign for Adrenaline: Near Future, Forged in the Dark. The file at the end describes what I did and includes a summary of the session and examples of the prompts and player responses. It worked better than I expected!

Going in to the session, the only thing that I knew was how I was going to run the session and that it would start with a car chase at the end of an operation. No locations, factions, NPCs, etc. All the players had was a character concept and a sheet with less than 50 words of rules and a place to track adrenaline (stress) and harm. Most importantly, the characters had no action ratings, gear descriptions, or special abilities.

By the end session’s end, we had 4 player-created factions, a kickboxing studio / crew hangout, a dead NPC named Reaper that is apparently important (only one player knows what the hell is going on with that NPC), 3 other freshly dead antagonists, an upside-down hearse in a parking lot, an important corpse in an oversized duffel bag, and a payday from a shady NPC named “The Rat” in the sewers. We also know that the character that slung the corpse filled duffel over her back found it oddly similar to a previous operation that went bad – when she had another character (bloody and dying) slung over her back as she ran from police…

As for the characters, we have an android with inappropriate human emotions, a vat-grown engineered human, a tattooed dwarven mechanic, and a were-fox with anger management issues. The characters all have well developed personalities and backstories, but still NO action ratings or special abilities.

They do now have playbooks and will generate characters and the crew at the beginning of our next session. I also hope that we can find out why The Rat paid them to steal a corpse from the Office of Reformation, and who the hell the Reaper is.

Oh, and the two players (of 4) that had never played Blades in the Dark before understand (1) the core dice mechanic, stress and resisting AND (2) that “playing to see what happens” means that it is OK for players to make shit up!

See this for the tools I used and how they were used by the players: https://drive.google.com/file/d/1dvwD8LsptcbBplYGqU6eFNHy66-GG7Hs/view?usp=sharing