Which Gods Have You Used?

Seeing as how all of the gods in the book are exclusively names, I’m curious. Which gods have you used in your campaigns, and what are they like?

In the campaign I ran one of my players joined the cult of The Closed Eye, a god of knowledge who appeared as an endless millipede of human arms–each pair transcribing the life of a different person–with mouths beneath each armpit. Their eyes were the sun and the moon, though the sun was taken in the cataclysm; the name comes from the fact that they always had one eyelid closed while that eye was sent out to see the world. Now half blind they task their cultists with seeking out the events they’ve overlooked.

A character I played followed The Lady of Thorns, who, from a distance, appears to be a woman dressed for a garden party in a large face concealing sunhat. When you get closer you’d see her lower body is a tangle of vines rooting her to the ground, while the hat is actually a massive rose which is replacing her head from above the mouth. Her core tenet is balance between happiness and suffering, and so tasks her followers with punishing those who have led happy lives, and rewarding those who have not. If your interested I’ve also come up with a fairy tale and children’s game concerning her, because that’s just the type of person I am.

I will reply so your question isn’t left hanging

The reason I was slow to reply is because we haven’t used any forgotten gods yet. My players even outright rejected the Cult Crew type because they didn’t want to be beholden to some higher power and wanted total independence. So I have had no reason to introduce a god yet.

Your question did get me thinking, though. I reviewed page 305 in the rule book. The “cult practices” are divided into categories: Sacrifice, Congregation, Acquisition, etc. We have a couple of Crew members in our game that have a history at the University. So I could see them coming across an academic that is “acquiring” holy writings. Then maybe that is how they are introduced to the Forgotten God that the academic is acquiring the writing for.

A second way would be through the vice of one of our character’s. Their vice is to obsess over arcane occult relics. A some point I could have a relic actually communicate to her. It would be a forgotten god.

A third thing I might consider is the Crew coming across a faction or small cult that is “congregating” to worship their Forgotten God.

Those are ways I would introduce a forgotten god that most fit our game and crew.

By the way. I forgot to mention that your gods sound cool. Especially the images and background. I will remember to do that if I introduce gods (with player input, of course!)

In my first campaign, we had a character who was devoted to a forgotten God called Yanth Agog, who would periodically manifest as a hazy shape just out of sight and instruct the character to do random things. Sometimes it was “go to Nightmarket and leave a coin on the ledge of the well by the square”, and other times it was “go to a particular house in Dubslough and kill everyone inside.” The catchphrase was “this is His Design.”

One of my players is a priest of Hand of Sorrow. It all started by accident really. He was a whisper laying trap for some goons. After some gathering of information, he found an alley where multiple murders occurred with some ghosts left in the wake. During the score, he got a crit on Attune roll, so I gave him a nice effect of ghost hands crawling out of ground and walls and grabbing the opponents. After the session I didn’t want to just leave it be, and a ghost being a conglomerate of hands started “stalking” the whisper and “helping him out” (ie. killing some enemy ganger and leaving a soul-less body on the steps of whisper’s house).

All in all, after 10 sessions, conglomerated-ghost evolved in a full fledged forgotten god Hand of Sorrow. Featureless face, multiple hands, pale skin. He feeds on sorrow, but in return holds of the greater disasters (ie. before the cataclysm, it was customary for a new chief of village to sacrifice his child to Hand of Sorrow, to guarantee prosperity for whole community). At the same time, the priests of the Hand are unable to feel sorrow at all (which would explain whisper’s Cold trauma) 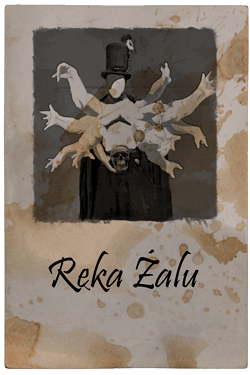