Character Sheet online (if you need it)

Hi!
Because of the covid situation, with my friends I’m playing an Agon campaign online, using Discord.
I made an Agon character sheet in google sheet. I’m linking it here if somebody else needs it (you need to duplicate the file to use it or change it).

This is great. My group has been using the roll20 sheets, which look great. But I’ve found roll20 clunky at large, especially when it comes to building Agon dice pools, and I’ve been looking for something we could use instead with rolldicewithfriends.com or the like. Thanks for putting it together!

These are rad, thanks Matteo!

Can you post a Paragon System version; where the DB sheet is easier to find and edit?

I also plan to use them as shared docs so I dont have to write anything down,

There is a hidden tab with all the data I used - here you can customize the numbers and some part of the text of the sheet.

I did find it and I’m tweaking it for Paragon now.

I just can’t get the Glory drop down to work - I deal in Excel, Google sheets are still new to me

The glory hasn’t a dropdown - the player should insert the number by hand - and when you reach an X value of glory, your name will change the die.

But I did an improvement: I changed the formula a little bit. Now it refers to some variables so you can change the “step for the promotion” easily.

The formula in C3 is:

Basically, I checked the value of glory and if it’s > than the variables, the name’s dice change.

The variables are in the hidden tab: 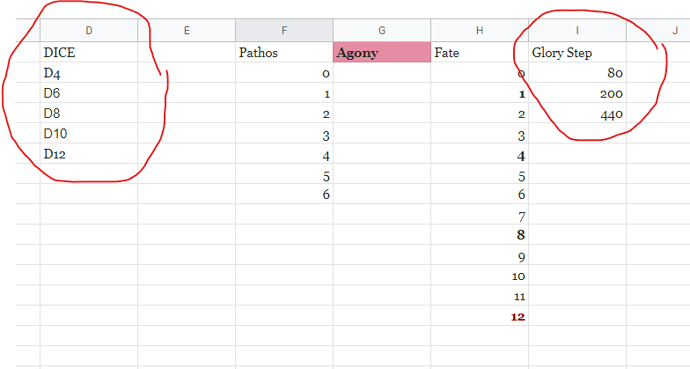 The difference between the paper version of the sheet and this is you don’t need to “reset” the glory every promotion. You just go no to add glory.

Hey, I translated your sheet into German for use with my friends (some of whom don’t speak English all that well). Would you be okay with me posting it here? And if you are okay with that: I always told everyone where I got the original, but if I post it here, I would want to give proper credit in the document. How would you like to be credited? (My Idea would be: “Original sheet by Matteo Sciutteri” and then a link to your original.)

Ah don’t worry at all! It’s not necessary

I’m happy the sheet is useful! Also check this version, maybe you prefer it Digital character sheet for Agon, available in english and spanish (Google sheets)