Glow in the Dark

Glow in the Dark is my love letter to the post-apocalypse, specifically Gamma World, Fallout, and Mad Max. The back of the book has this to say about it:

This is the white-line nightmare of the Cold War brought to half-life, a mythical doomsday that never was. Twisted metal rusts away under shifting dunes. Maniacs kill for food, for fuel, or for fun. You will create a tribe of survivors - a gang of post-apocalyptic scavengers and warriors desperate to survive. We will play to find out if your tribe can flourish despite other hungry gangs, forgotten pre-war threats, the unforgiving elements, and their own dark impulses.

Glow in the Dark can be played gonzo or grounded. There are factions of mutant apes, rogue AI, and self-driving trucks, but there are also plenty of speed freaks and cultists worshipping ancient relics if you’d prefer. Glow came out before the SRD even, so it only contains modifications to the rules you already know. It’s a short read!

There are also plenty of random tables for generating encounters while trekking, killer robots, post-apocalyptic vehicles, what that guy over there is wearing, and names like “Liam Nissan” and “Final Pam”.

You can find it on DTRPG: https://www.drivethrurpg.com/product/223216/Glow-in-the-Dark

The original hack! Forged in the complete dark! Assembled from wasteland scrap before the forge was built!

I read that in an Australian accent. Well played. To that, I can only add:

If you play Glow in the Dark, this may be useful (currently free to download via DriveThru)

Nice! It’s free (at least when I visited that link) and pairs very well with the d66 junk table inside the Glow in the Dark book: 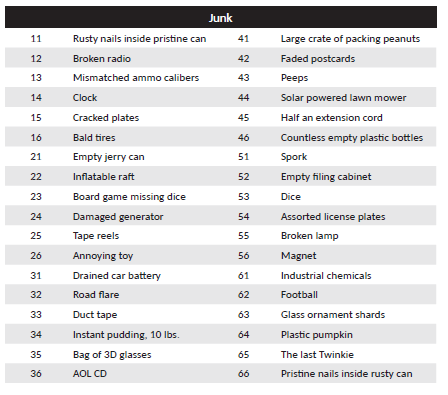 Sweet. There’s a few online generators I’ve found as well. Like these: https://wizardawn.and-mag.com/rpg_apoc.php

I need to get more detailed in my descriptions in general…

So the population thing:
“Your settlement also houses a small population who depend on your tribe for survival and who, in return, can abstract away most of the basic maintenance, hunting, and gathering necessary for day-to-day subsistence in the wasteland.”

What thoughts do we have about how large this population actually is? On average anyway.

If we go by Blades gang sizes the Ape Empire, Tier 3, should have about 12 tribe members. Presumably this is the leadership and the main players in the empire, but “empire” implies there’s quite a lot of people they control

I actually just now noticed there’s no Tier 5 factions in Glow, so maybe those numbers make some sense? That would make the population in the area somewhere around 12000 people, of whom many are apes, plants, insects, mutants and weirdoes.

Aaaanyway, the reason I bring it up is because I’m wondering if the 20-30 people I’m telling the players their tribe has is too much at T1, and according to my science! above it’s WAY OFF!

I think it’s fine though, because fug it. And because some factions probably have way more people than others just because of their nature.

I think it’s fine though, because fug it . And because some factions probably have way more people than others just because of their nature.

This is the right answer!

Your settlement’s population (and by extension other factions’ populations) are there to prevent plans like “let’s just literally murder the entire Ape Empire, there should only be like 12 of them.” The population doesn’t necessarily need to scale with Tier, although in many cases it feels right for it to do so. Your instinct that it depends on the kind of faction matters too - the name list for the Sleepwalkers, for me, is all there have ever been, but the Free Radicals have had as many hangers-on and bikers as I’ve needed in the past.

I think gang size isn’t quite the right lens to look at a community with. In Blades terms I think the community is the gang plus the population of their turf, or the people on their turf that are committed to supporting the gang. The gang itself is the leadership and committed backers they can call on for direct support. It’s the people in the leader’s personal chain of command on a daily basis.

The relationship between gang and community can vary a lot, depending on the kind of faction as has been rightly said. Factions with a really tight control of their community and a high level of discipline are probably punching over their weight, so their community could be just the gang, or a small multiple of population over that. Conversely a very dispersed community with loose discipline and perhaps a low level of commitment to the leadership might be very large compared to what the the gang tier might suggest.