Hello Forged in the Dark forum! I have a hack to share.

hello, world is set in a post-scarcity digital utopia, where enfranchised Users such as yourself horde the only valuable thing remaining that cannot be easily manufactured: precious Memories. World is a cloud computing heaven split into five servers and ruled by rapidly-shifting public opinion. Immortality is ensured for all Users. What isn’t ensured is a sense of personal identity, as Users shed their memories and remake their self-image in a society ruled by collective amnesia… 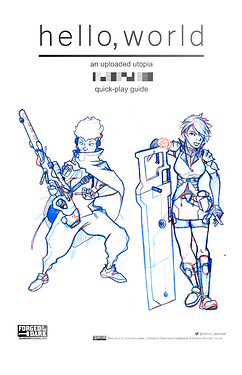 This is a ‘speculative future’ Blades hack with an optimistic outlook, where Vice is replaced with hopeful Reminiscences and the crew can change the terms of World’s infrastructure and social pyramid and (if they desire) improve the lives of everyone, rather than just claw their way to the top of a faction chart and punch down like all those before them.

Character playbooks so far include:

Right now the only supported crew playbook is the Black Hats, stealthy information brokers with a lot of similarity to a Blades crew in terms of method and goals. Future crews will include revolutionaries, moderators (similar to Bluecoats), and a community-focused District playbook.

The current playtest version of the game is available for free from: https://umbralaeronaut.itch.io/hello-world

One of the things that makes hello, world a more hopeful forged in the dark game is the action system: here renamed ‘Functions’. 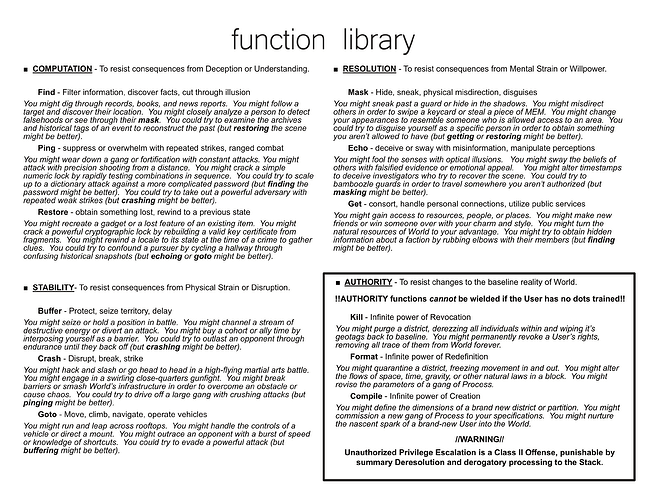 As you can see there remain 12 functions but they’re broken into four categories, and one of those categories is highly restricted. User playbooks (ie. the Players) don’t have any Authority functions on their sheet and ordinarily cannot attempt those actions.

Each crew playbook does have the three Authority functions however, and through the Crew is how the players will wield Authority. Each crew accesses them in a different way. The Black Hats surreptitiously siphon thin slivers of Authority away from the Administrators and ruling factions of World in order to achieve selfish goals. Revolutionaries will attempt to escalate their privileges by accessing the forbidden ‘Superuser’ status and regaining the power that has been denied the inhabitants of World, while Moderators will received limited sanction to employ Authority in their pursuit of justice, etc.

The Authority functions are intended to be used as the capstone of a dramatic arc, possibly a string of scores and associated downtime actions, and they can radically change the setting and enable powerful player agency in the setting.

The angelic Administrators who enforce the laws of World and keep vigil over the gates of Helios do not look kindly upon the subversion of their powers, however…

Oh wow. You made a strong aesthetic choice here and you really commit to it. This looks fantastic.

I like how the setting’s origin is purely agnostic, letting you tell stories from The Matrix to Tron or Reboot.

The action and item names are evocative, I had so much fun reading about them and imaging what they could do.

Also, PLOT MAP?! Such a good idea! I struggling for so long with what the claims component would look like in my hack and this is such a great answer to that question.

Thank you! I love what you’re doing with Neon Black, by the way! The Plot Map is currently in a bit of flux, right now since there is no Weak/Strong hold mechanic I needed something to gatekeep the movement of the Crew up and down the tier list a little bit so it’s mostly a prompter for the group to ask questions about the fictional positioning of the Crew before they level up to a new Tier. The Black Hats are less about area control and more about what they know/have stolen from others, and I want to do more asymmetric Crew designs to sell their various flavors better. There will likely still end up being some analogue for Claims, I’m just not sure exactly what it looks like yet. Maybe some kind of Blackmail chart.

Anyway, this conveniently segues into the preview I wanted to do of Factions in hello, world. Factions are very fluid in the game. It’s a hyper-mobile digital environment ruled by accelerated waves of media-driven zeitgeist and a microscopically-small social attention-span. Districts and entire Servers get remade overnight, castles to the latest reigning Faction rise up and fall in a heartbeat, that sort of thing. 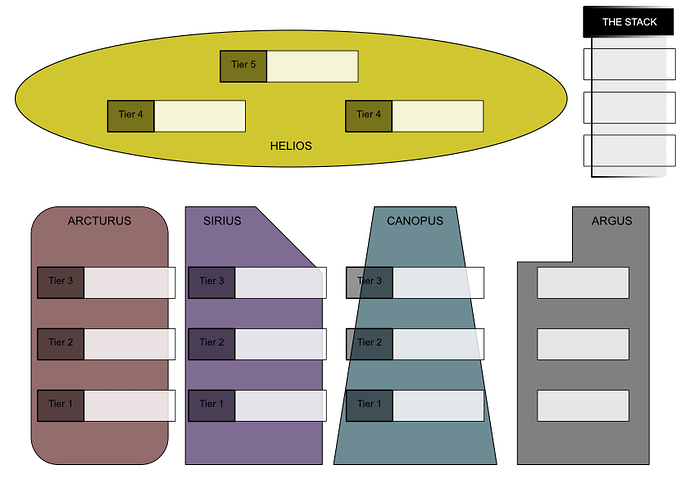 Faction%20Map%20v2842×596 39.1 KB
Helios is the domain of the Administrators, and those factions which have risen above the other four Servers for a temporary spot at the top of the lobster bucket. The Stack is a temporary holding area for derezzed Users and even entire Factions that have been taken out of the action and sent to a brief purgatory. More on the Stack later, but suffice to say that for the players it’s a sort of conflation of the mechanics for Trauma and Incarceration, while for the faction game it’s where a defeated adversary might bide their time before returning to trouble the players again…

Note that nothing is pre-placed! The table will collaborate to fill in starting factions in the player’s home server during Crew Creation, and the GM is then free to add other things that interest them or fill out the faction web in a pleasing way. But, that means that any faction might show up on the map at any Tier…? 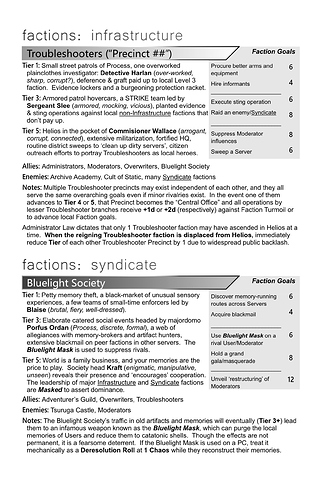 Faction%20Teaser1650×2550 573 KB
Note the entries describing their assets, staffing, ambitions, etc. at ascending Tiers 1, 3, and 5. The GM-prompting ideas for Faction Goal clocks also evolve to be more ambitious and build on previous successes. If the faction is on one of the intermediate Tiers (2 or 4), then the GM can interpolate, perhaps give them a Goal clock from the lower tier they’ve already succeeded at. The target is have every faction in Hello, World make sense at any Tier, in any Server. That way when the GM rolls on the Faction Turmoil table they can quickly erase and reposition factions around the map of World and know at a heartbeat what the shifting fortunes mean for their structure and operations.
2 Likes
umbralAeronaut (Charles) July 16, 2019, 1:22am #5 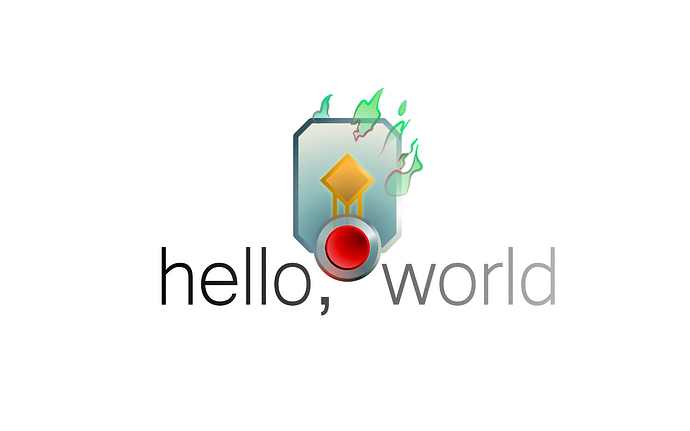 Preview 2: Immortality, Trauma, and the Stack 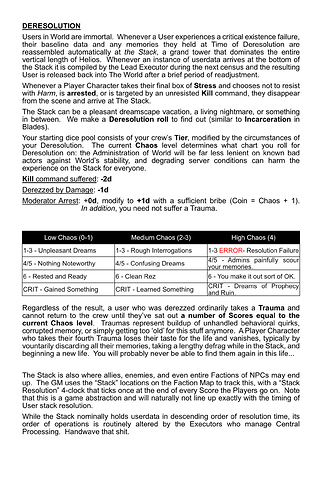 As you can see hello, world integrates several Blades gameplay loops into a single system. One of my favorite things about Blades in the Dark is how the desired gameplay informs elements of the setting; the lightning field around the city enhances the feeling of urban claustrophobia and forces the players to stew in the Heat they’ve created, for example. Elements of World will appear similar, and for much the same reasons.

In thinking of ways to add to this tradition, I examined things that felt a little flat to me about core Blades. I’ve long felt that Traumaing out during a score in Blades was a little lacking in gravitas, and Incarceration often comes across as a slightly odd gameplay sub-loop. While concepting out the setting for hello, world it was important to me to have a system that integrated some of these gameplay loose ends and made them feel cohesive.

In addition, the factions above want to flow dynamically through the open-ended map. But that means that some are getting kicked off the faction chart to make way for others. The Stack opens up the concept space for defeated adversaries or allies to come back later in a campaign and harass the players. Not shown in this draft but still kicking around in my head: Faction Traumas. How might the Cult of Static change after a rough stint on the Stack? Do they double down on extremism, become paranoid, shift into strange new allegiances, or alter themselves entirely? More on that to follow…

I love the flavor-- I also was excited to see some overlap in vocabulary with hack (Adrenaline)! You have Redline as a special ability, I have Redline as a crew type. My hack is focused on a real world (whatever that means), not virtual reality. However, I do have a rough draft of an optional immersive virtual reality (Mirror World) with distinct districts (and Admins & Moderators). I really like your actions too – ping, crash, echo, etc.

Thank you! Pinning down the actions took a lot of time, especially as I chopped back the number that was in play for players in 99 percent of the game. I’ll probably talk about those at some point soon.

So long since an update! The first big thing to know is that hello, world is now a beta product, defined in this case by being feature complete for a short campaign arc with downtime actions, GM suggestions for campaign play and intro scenario creation, 9 complete NPC factions to play with, and even role-playing safety tools integrated into the back of the booklet. Also I dropped a development diary about making the foundation for playbooks and what systems of the game you need to have locked down.

For the rest of this weekend until Monday the game will remain Pay-What-You-Want, after which point I’m looking down it’s price. Go for it now if you haven’t already!

Now that I’ve hit the beta milestone I’ll be taking it easier on frantic typing/word count of the game (I was trying to get it all together in time for the end of #DREAMJAM) and focus more on art, graphic design, and polishing what exists. Once I have a few more factions to facilitate more of the game’s long-term churn and support longer campaigns, I’ll reattach some of the core systems and integrate a large chunk of feedback from play testing. 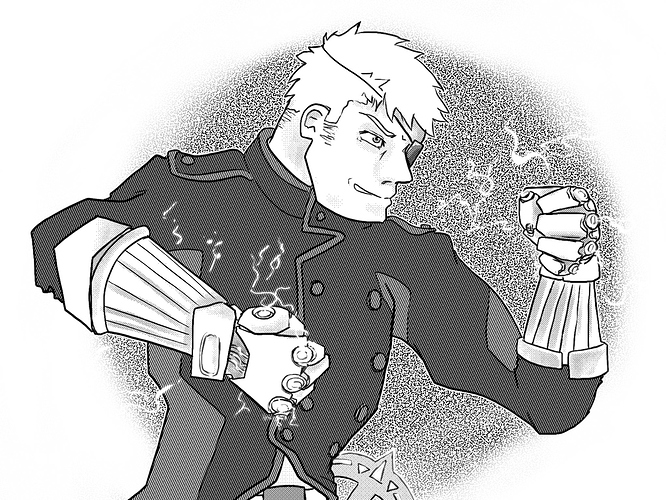 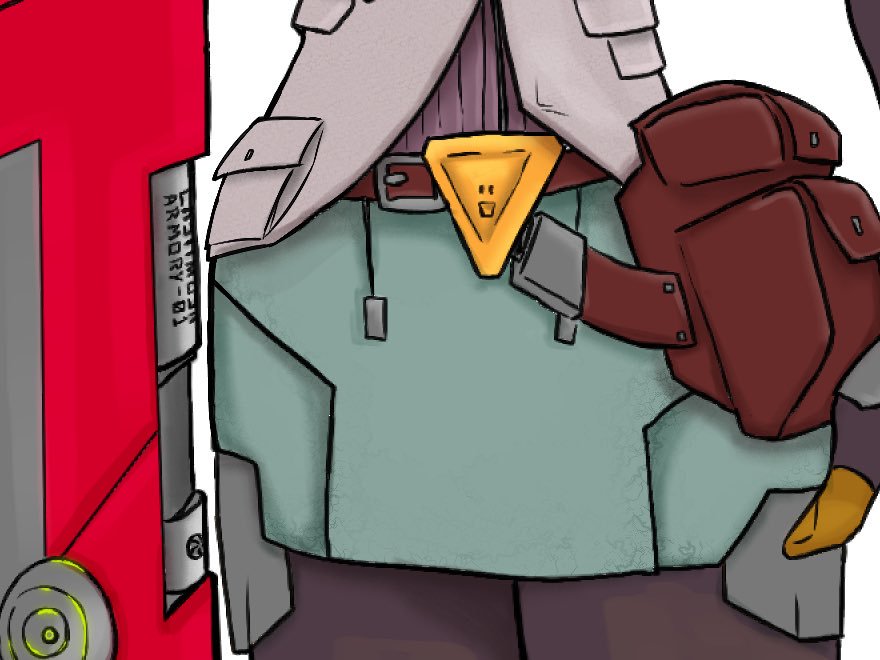 I have been trying to capture a bit more of what life in World looks like, gonna do a series of downtime vignettes for my playbook iconics. Here’s the first one, the Breaker (needs a name) taking some time off in a lounge in Canopus. 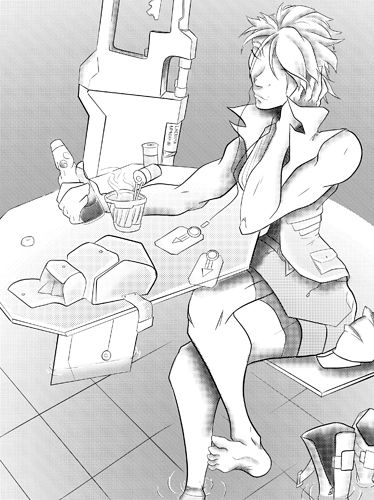 This also plays into my goal to get some pregen playbooks prepared for the next few conventions.

Handouts are hard to design! I’m trying to iterate out one that gives even players unfamiliar with Blades an easy jumping-in point to the Action roll. 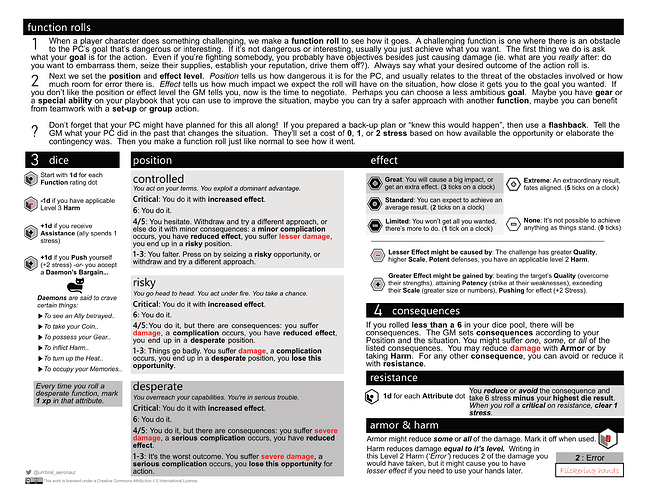 Pretty happy with the flow on this one so far.

Are you going to Big Bad Con? If so, hang out and play Hello, World! I am GMing the game in one slot every day of BBC!

Lots of player handout polish and text corrections in the game materials, some tweaked playbooks, and a brand new Crew type!

My next project will be to update the GM booklet further for formatting and readability, more introductory text about the setting and random tables to drive scenario creation.

Thanks for following along!

Just updated with the 7th playbook of Hello, World, the CAPACITOR. They’re destructive, chaotic, telekinetic force wizards and they possibly have loyalties to an otherworldly cabal of entities foreign to World. So naturally they make great Player Characters. 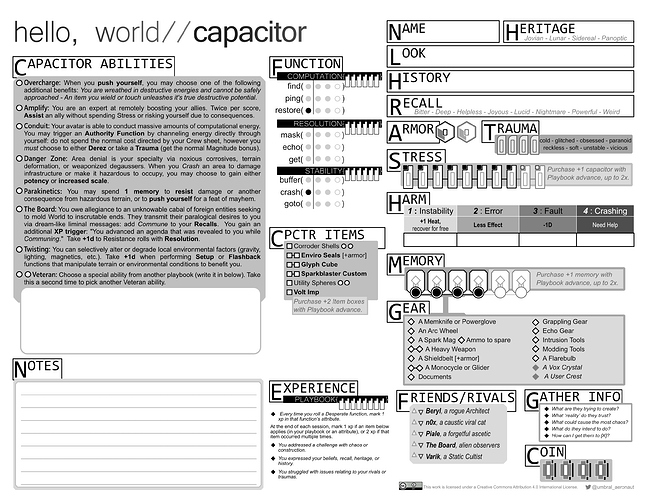 I need to write more about this game as it is designed but life continually gets in the way! Suffice to say: I will be at PAX Unplugged in December, promoting HW! I will have some kind of zine to give to people there! I miiiggghtt be able to GM for folks? If those are things you are interested in, hit me up here or on my Twitter account, umbral_aeronaut!!

I’ve gotten back into the swing of doing design diaries once again! My first two, covering the Breaker and the Filcher playbooks, are linked below.

If you happen to read and enjoy these, please boost me on social media! Contribute to the poll on which design diary I’ll do next!

The Hello, World RPG now has a Spotify playlist!

There has been a huuuuge update, detailed in the following development diary: https://umbralaeronaut.itch.io/hello-world/devlog/113050/hello-world-super-update-new-gm-guide-new-playbooks-new-setting-notes-new-rules-new-memories

In short, now is the best time to go check out HW while the price is still rock-bottom low!