A Solo RPG about Alien Revolution

Inspired by the conversations happening about making an X-COM hack of Band of Blades, I’m thinking of putting together a small, single-player RPG about aliens resisting a human occupation. A few of my guiding principles/inspirations:

A few design ideas I’ve been playing around with:

A Movement, Not a Character
Instead of playing a singular character, you play as a resistance group made of various alien species. Influenced by the excellent Antiquarian Adventures by Ash McAllan, each character is a combination of an alien species and a role. These different combinations add to the crew’s action ratings and provide s special abilty. When the characters leave the resistance, you can no longer use the special ability associated with that character, but the stat bonus remains. This represents the lasting influence that character had on the group.

I’m hoping to have several possible combinations of aliens and roles, because right now I imagine that when you run out of characters, you lose.

Clocks
To be able to track obstacles, both small and large, I’ll be making liberal use of the clock system. Large term goals like setting up a communication system or reclaiming territory will be advanced when you complete a mission. Clocks will also represent immediate threats and goals during missions. I imagine the goal of the game will be to fill a certain amount of long-term goal clocks to enact the change you wish to see. When you complete a large goal, the crew receives some sort of bonus, similar to a crew upgrade or special ability. Something that will make future missions easier.

Cards
Inspired by the system used in Crash Cart by Galen Pejeau I wanted to use a deck of playing cards rather than dice. When the player wishes to accomplish something risky, they will select one of the group’s actions and draw cards equal to the action rating. Face cards are successes, black cards are mixed successes, red cards are failures. Jokers introduce a large complication into the scene and perhaps do something else.

That’s what I’ve got for now. Has anyone else here messed around with making solo RPGs, or using the FitD system to make something similar?

I love this concept and I’ll be following along!

Alright. I’m close to having a prototype of the rules for this game. I have most of the moving pieces sketched out, now I just need to build a character sheet and figure out what the different special abilities do.

I’ve found it’s important to get a good handle on the basic rules of the game before you design character rules since, especially in a Powered by the Apocalypse or FitD type game, the characters get abilities that allow them to modify or break the rules. Can’t break those rules unless you know what they are.

One of the things I’m mostly confidant about are the actions and attributes of the resistance. Since in this game the character sheet represent the whole crew of resistance fighters and not just a single character, these actions need to describe what a group can do rather than what an individual can do. Also, they should fit the context of a game where you play as aliens resisting human occupation, so the actions should feel like you are pushing back against the status quo.

I think most of these evoke the feeling of collective action and resistance, and I like how many of them sound criminal. Thoughts?

Alright, I’ve been doing a lot of work to get this game to a prototype stage where all the rules are there so I can start testing and adding fictional elements like factions and alien cultures.

Right now I’m calling it Riot in the Stars. I think it captures what the game is about- revolution in a science fiction setting. Also it’s a slight nod to the source material, Blades in the Dark.

To get to the prototype stage I struggled a lot with the core mechanics. When does the game end? What do you need to accomplish on each mission? How do you codify story telling mechanics so the game is still challenging and players don’t just spam the same action over and over?

I don’t think I’m all the way there yet. The game feels a bit too, well, gamey. Previous single-player games I’ve made and games I’ve played and loved felt like creative ways to give the player writing prompts. You are given everything you need to tell a compelling story, and its’ different every time. Riot in the Starts feels a little too much like an X-COM type game that happens to have some story in it.

Regardless, I have a prototype and I am play testing. Design and iterate, right?

The complete prototype documents are available exclusively to my $1+ patrons, but here’s a special preview of the resistance and mission/faction page. 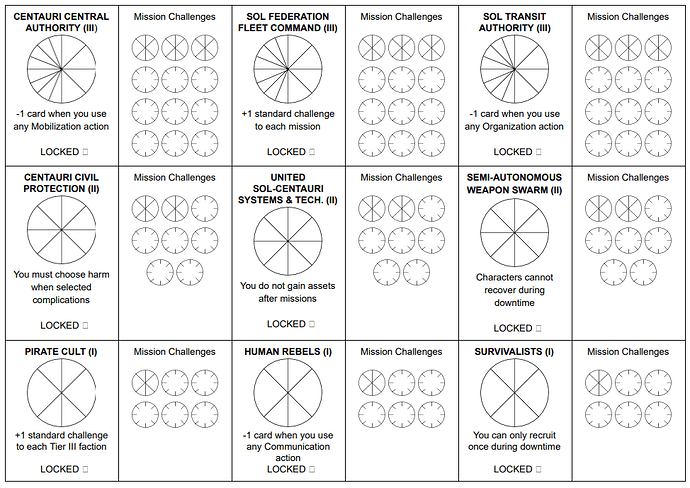 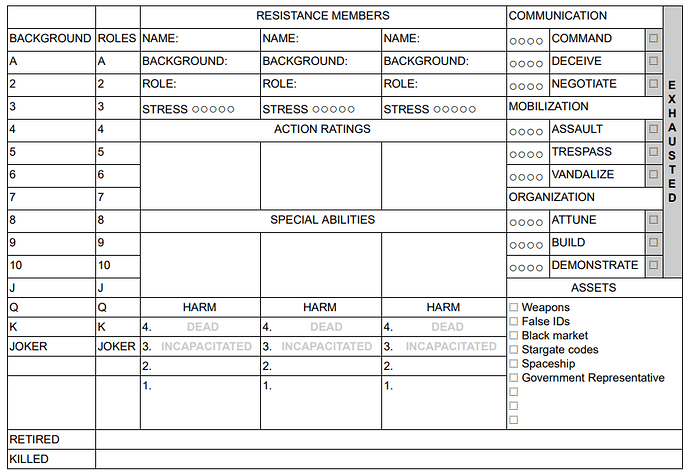 Currently the game proceeds through faction turn, downtime, then missions. During the faction turn each active faction draws cards and advances their faction clock. When it fills the resistance gets a debility/complication and the humans are one step closer to winning.

During downtime the various resistance members can recover harm, stress, and the player can retire characters and recruit new ones. This is how you get more action ratings, by recruiting new members and seeing them retire to the sidelines.

So yeah, now I’m just going to play it and fix it and start generating fiction.

Are you including the concept of turf from BitD, whether as actual bits of territory that the uprising gains control of, or conceptual turf that they gain? It would seem to fit into the general theme that you’re going for there.

Hey! Thanks for the interest!

To answer your question: yes. The resistance gains territory when they defeat one of the 9 factions. This is not in the rules of the prototype at present but after testing I think each faction will give the resistance a debuff if their project clocks fills, and the resistance will get a buff when they empty that clock. Successfully erasing a faction’s clock means that faction is defeated and has become part of the resistance’s ideology. So it’s more conceptual/up to the player what it looks like.

Interesting! I look forward to seeing the details.

draw cards equal to the action rating. Face cards are successes, black cards are mixed successes, red cards are failures. Jokers introduce a large complication into the scene and perhaps do something else.

I’ve been thinking about this and doing some calculations - if you would like to get closer to the probability distribution of the FitD d6s, then you might want to do the following.

Which is a really close match to the d6 probabilities.

Wow, thanks so much! Someone in the Blades discord community gave me similar feedback earlier that I’ve implemented in testing. I think it works much better. Right now my system is:

Black face cards (JQK) as successes
Black A-10 are mixed successes
Any red card is a failure
Jokers count as black face cards (including for the purposes of determining criticals, which are multiple black face cards) but add a major complication (betrayal, future catastrophe, etc. these work as sort of major entanglements).

So, bit of an update on this. I was trying to get this finished by the end of the month but pretty much since I started I had a voice in my head saying,

“You shouldn’t be doing this.”

That voice is right. I’m not comfortable telling an anti-colonialist story. Not because I think there’s anything wrong with it, I do still think it’s a great idea for an RPG, but because I’m not the right person to make it. I’m a settler on land that doesn’t belong to me, my ancestors built empires on other people’s countries, and honestly I only think I know what I’m talking about with regards to what its like to live with this sort of oppression.

I could do this better in the future. I could hire consultants and take the time to learn and listen and maybe partner with someone who has experience with this sort of thing. I don’t have the resources for that right now, and it would be irresponsible of me to continue making this game without that, so I’m stopping.

If anyone reading this comes from that sort of background and would like to make an RPG, hit me up. I have a half-finished sci-fi solo rpg about resisting human colonization to give you.

I have not messed around in building a solo FiTD campaign but that is how I’ve been playtesting! I’ve been playing the characters while my partner GMs and what I’ve found is that FitD makes that kind of playstyle incredibly intuitive and viable.

A natural taxonomy formed really rapidly with a captain and crew while playing single player:

I love the setting of your game. The inverse of humans being the oppressors is a nice twist and I think if you get this right it could be a real evocative game.

One thing that might help is removing consequence tied to the character who rolls. That will allow the camera to cut from character to character to simulate the squad coming in.

Are you trying to get rid of the GM role as well? I think that is a big choice in terms of narrative versus crunchiness of the game. Remember that Blades and many other games define RPGs as a conversation.

Feels like how the characters interact both mechanically and narratively is going to be a big decision in how this game plays out.

I also think a Starting Scenario of some sort of riot or protest gone bad would be really cool and in a lot of ways timeless. Hope some of this helps.

Wow. Thanks so much for the feedback. Wasn’t really expecting that.

Just to let you know, I’ve started working on this game again, with a different premise. Instead of playing as a crew of rebels resisting colonizers, you play in the same universe as a detective, solving mysteries as tensions rise between the Centauri and the Sol Federation. The factions are the same, and the mechanics will be similar.

You are correct in guessing that I’m getting rid of the GM role as well. I want this to be a solo experience like Ironsworn. But a GM could easily fill the role if needed and there might be room for a typical GM with multiple players set up like most RPGs.

Still in the early stages but if you enjoyed this, you’ll probably enjoy whats to come. I’ll be sure to update this thread when I have something more concrete.

Again, thanks for playing and for your thoughts!

So, I’ve turned this project into a single player sandboxy science fiction game, mashed up with the Ironsworn RPG system. You can read all about it in this thread.